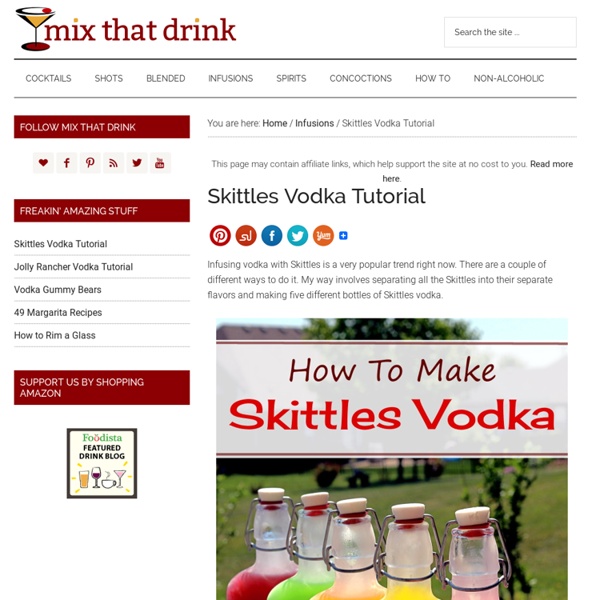 Infusing vodka with Skittles is a very popular trend right now. There are a couple of different ways to do it. My way involves separating all the Skittles into their separate flavors and making five different bottles of Skittles vodka. For this project, you’ll need: One 1.75 liter bottle of vodka (I used Stoli – you don’t need the most expensive vodka, but do avoid the cheap ones)Five 8.5 ounce flasks or bottles (buy them from Amazon – here’s another that looks like a retro milk jug. For a Halloween party, serve these neon-colored concoctions in test tube shooter glasses.)One 1 pound bag of SkittlesFive empty plastic water bottlesA funnelBowls for separating the Skittles into flavorsA measuring cup (not pictured)Coffee filters or paper towels

S'moretini Shooters Me again. Here to convince you that you need yet another trendy, insanely-flavored bottle of booze. I do what I can. I know what you’re thinking. The Astounding Design Of Eixample, Barcelona Constructed in the early 20th century, Eixample is a district of the Spanish city of Barcelona known for the urban planning that divided the district into octagonal blocks. Influenced by a range of schools of architecture, Eixample Barcelona was designed in a grid pattern with long streets, wide avenues, and rounded street corners. Despite being in the center of a thriving European metropolis, the district provides improved living conditions for inhabitants including extensive sun light, improved ventilation, and more open green space for public use. And of course, the result from the grid-like structure is astounding from above:

How To Make Vodka Infusions Lately I've gotten into creating infused Vodka. This basically means adding fruits, herbs, and spices to Vodka in order to create a uniquely flavored liquor. There are plenty of sites out there with tips for infusers, recipes for infusions, and cocktail recipes. Drinking Games Have fun with The Webtender's collection of drinking games, but be extremely careful if you play any these games, especially the ones with high buzz factors. The collection was created as an aid to responsible adults who know their limits (and not to cross them) when it comes to drinking, and not to promote this kind of drinking behavior. You should of course be of legal drinking age if you want to play these games with beer or drinks, but anyone can play these games with non-alcoholic beverages as well. To view an entire collection of Drinking Games and more visit The Webtender: And remember, always drink responsibly!

BACK TO THE FUTURE : Irina Werning I love old photos. I admit being a nosey photographer. As soon as I step into someone else’s house, I start sniffing for them. Blow Pop Martini Jelly Shot Blow Pop Martini Jelly Shots, watermelon and sour apple flavors I blame my current candy-inspired cocktail obsession on Three Olives Bubble Gum Flavored vodka, 100%. Although it is unusual for me to steer towards sweet cocktails, I find myself completely overcome with infatuation for this spirit. I concocted these Blow Pop Martini Jelly Shots for JSTK's TV debut on Twin Cities Live (here's the link to the segment if you would like to watch . . .), and am eagerly searching for more Bazooka-flavor friendly drinks - if you have any inspiration in this regard, please comment or send me an email!

Finds: Awesome Cake Designs Posted by C on Wednesday, June 13, 2012 · [via thisisnthappiness.com] I’m not really that big fan of cakes. The other day, I found these really amusing cake designs that make me want to taste one! Would you want to try that hot chocolate cupcake up there? Marinated Feta Recipe There’s lots of feta-like cheese out there, but only cheese made in Greece is considered true feta nowadays and you can’t call it feta anymore unless it was produced there. Like Champagne, which has to be made in Champagne or Brie de Meaux which has to be made is Meaux, it isn’t feta unless it’s made where it’s supposed to be made—in Greece. Although I’m not much of a font of knowledge about a lot of things, if it’s food-related, I’ll do in a pinch. If you want to make something that’s impressive and incredibly simple to put together, maybe I can help you out there as well. This is a favorite around here and once you make it, you’ll be rewarded in the days following with salty chunks of cheese infused in a sublime bath of fruity olive oil scented with summery herbs.

Ben Colclough: Kilimanjaro: 5 Things They Don't Tell You Last year, an estimated 25,000 people set out to climb Mt Kilimanjaro, Africa's highest mountain. In so doing, they ate approximately 110,000 snickers bars, drank 70,000 litres of tea, expelled 75 cubic metres of intestinal gas and used 962 kilometres of toilet paper. More significant for the rest of us, they also produced some 25,000 personal accounts of the climb, tales of altitude, aptitude and attitude that have been written up, blogged about or televised more times than Britney Spears' waist line. With all this exposure, you'd be forgiven for thinking that a trek up Kili (as it's affectionately known by morons) would yield little in the way of surprises, every trivial twist and turn having been cogitated ad (altitudinal) nauseam in the pages of some glossy travel mag.

Brown Butter Double Fudge Chocolate Chip Cookie Dough Cookies Little bit of a mouthful there. But it’s like a cookie on top of another cookie! Yeah. Amazing Pickled and Marinated Vegetables Recipe : Jamie Oliver About Sterilizing Jars: Properly handled sterilized equipment will keep canned foods in good condition for years. Sterilizing jars is the first step of preserving foods. Tips: Jars should be made from glass and free of any chips or cracks. Preserving or canning jars are topped with a glass, plastic or metal lid, which has a rubber seal. 15 Cool And Creative Umbrellas Umbrella is one of those things you probably wouldn’t like to use very often. However, the tough reality is that it’s sometimes inevitable when you have to leave your cave (office or home). In order to make this experience less unpleasant, we’ve picked 15 cool and creative umbrellas to fight the evil rain.

Giant M&M Cookies This is how you make gooey, chewy, massive rainbow cookies that make everyone in life love your guts. Lookie here! You don’t even need a mixer. You just mix all the goods with a whisk. Don’t have a whisk? Spoons work too.