Activists promise largest climate civil disobedience ever at Paris summit. Thousands of climate change campaigners have promised to blockade a major UN climate summit in Paris with what they say will be non-violent direct action on a scale Europe has not seen before. 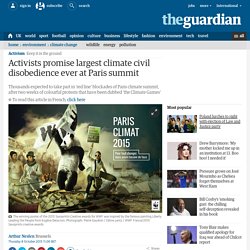 Grassroots groups from 350.org to Attac France are throwing their weight behind the “Climate Games” event for the landmark climate conference in December. The protests will involve 10 blockades, themed around “red lines” which they fear negotiators for the nearly 200 countries inside the summit may cross. Governments are meeting in the French capital in the hope of reaching an agreement for action on climate change after 2020.

Campaigners have shelved earlier plans to prevent delegates leaving the summit until they reach an emissions-cutting deal that matches activist ambitions. UK drops out of top 10 renewable energy ranking for first time. The UK has dropped out of the top ten of a respected international league table on renewable energy for the first time since it began 12 years ago. 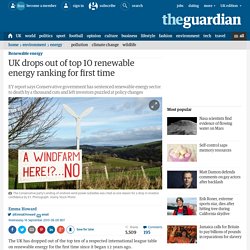 In its quarterly report published on Wednesday, EY said the new Conservative government had sentenced the renewable energy industry to “death by a thousand cuts” and investor confidence in the sector had collapsed because of policy changes over the summer. An EY energy analyst said that “investors are scratching their heads” to understand the government’s policy changes in recent months, putting at risk the UK’s reputation as a “safe harbour” for investment. Osborne ridiculed over 'cheap nuclear' claims. EXCLUSIVE/ UK Chancellor George Osborne was criticised today (9 September) after claiming that nuclear power was “substantially cheaper than any other low carbon technology,” when defending government subsidies for the controversial Hinkley Point C project. 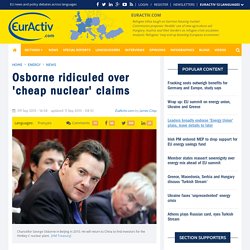 Osborne was discussing plans for the £24.5bn (about €34 billion) project, at the House of Lords Economic Affairs Committee. The deal with EDF guarantees the French energy giant a price of £92.50 (about €127.50) per megawatt hour (MWh). The “contract for difference” is roughly twice the current wholesale cost of power in Britain and will be paid from household energy bills.

Academics and environmental campaigners told EurActiv that the government’s own data proved many low-carbon energy sources, such as renewables, were already cheaper than than nuclear power in Britain. E3G — Third Generation Environmentalism. A $1 trillion investment vehicle for renewable energy. Wall Street (photo Ivo Jansch) A new report from Deutsche Bank predicts that the Yieldco, a finance vehicle for renewable energy, will attract more money than similar instruments that exist for oil and gas investments. 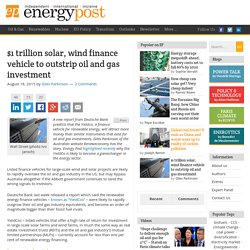 Tutu, Klein and Chomsky call for mass climate action ahead of Paris conference. Desmond Tutu, Vivienne Westwood, Naomi Klein and Noam Chomsky are among a group of high-profile figures who will issue a mass call to action on Thursday ahead of the UN’s crunch climate change conference in Paris in December. 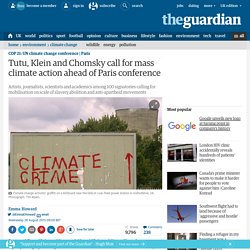 Why : The Future. The future is here. 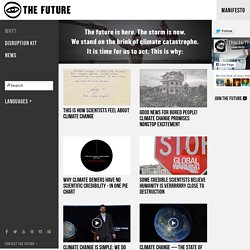 The storm is now. We stand on the brink of climate catastrophe: of ecological devastation, of flooding, drought, disease, famine and war. It is time for us to act. Our politicians have been bought off and they are scared. We are the resistance. It is time to make them hear us: to stand our ground non-violently. We are free citizens with power not consumers. Green Party Members' Website. Apply here ! - Place to B - Paris COP 21Place to B – Paris COP 21. If you are a journalist, blogger, photographer, designer, graphic facilitator, code and hack specialist, maker, (news) gamer, entrepreneur, comedian, climate expert… and you want to join in the fun, welcome aboard! 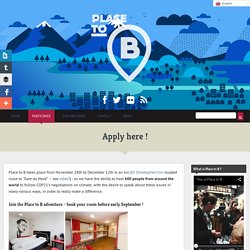 Place to B will be open primarily to those who want to follow the negotiations at COP 21 while having an HQ full of both inventiveness and diversity, with a different look. ZeroCarbonBritain - Latest report. Zero Carbon Britain: Rethinking the Future is the third report from the Zero Carbon Britain project, launched at the All Party Parliamentary Group on Climate Change event in July 2013. 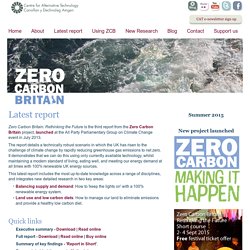 The report details a technically robust scenario in which the UK has risen to the challenge of climate change by rapidly reducing greenhouse gas emissions to net zero. It demonstrates that we can do this using only currently available technology, whilst maintaining a modern standard of living, eating well, and meeting our energy demand at all times with 100% renewable UK energy sources. This latest report includes the most up-to-date knowledge across a range of disciplines, and integrates new detailed research in two key areas: Balancing supply and demand: How to 'keep the lights on' with a 100% renewable energy system.Land use and low carbon diets: How to manage our land to eliminate emissions and provide a healthy low carbon diet. 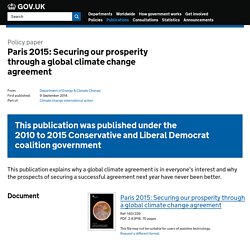 It will require courage, determination and ingenuity to deliver, building on years of hard work. It is not just governments around the world who want an agreement; there is widespread support from businesses, NGOs and campaign groups, many have contributed to this publication. A Paris 2015 agreement will create the vital framework the world needs to keep the global goal of limiting average global temperature increases to below 2°C within reach, and avoid the worst impacts of climate change.