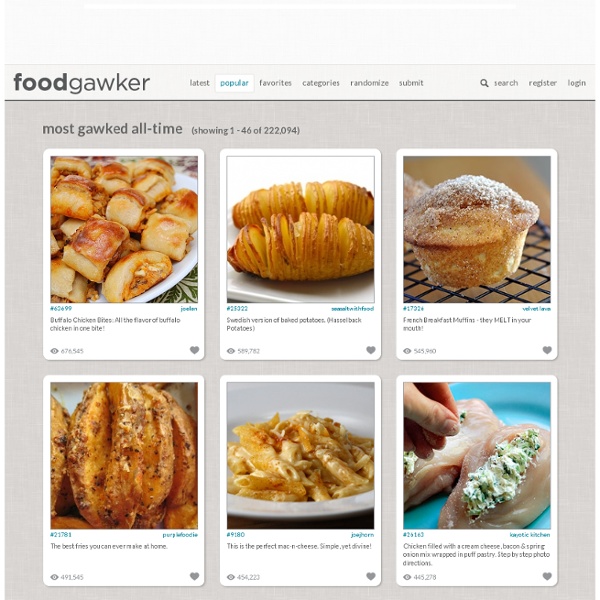 10 Gourmet Meals For $10 or Less photo: 10buckdinners.com Eating cheap is easy. Given $10 to buy ingredients for a meal for four, even the most hopeless home cook could whip up grilled cheese and tomato soup or a simple spaghetti-and-meatballs combo. But putting together a gourmet dinner for under $10 is more challenging. So we asked food and finance bloggers, as well as home cooks, to send in their best suggestions. When Chefs Get Bored Slick Men It's a Man's World. When Chefs Get Bored By – 2012/04/15Posted in: Art & Pictures Apple Love The Astounding Design Of Eixample, Barcelona Constructed in the early 20th century, Eixample is a district of the Spanish city of Barcelona known for the urban planning that divided the district into octagonal blocks. Influenced by a range of schools of architecture, Eixample Barcelona was designed in a grid pattern with long streets, wide avenues, and rounded street corners. Despite being in the center of a thriving European metropolis, the district provides improved living conditions for inhabitants including extensive sun light, improved ventilation, and more open green space for public use. And of course, the result from the grid-like structure is astounding from above:

Kaytucky Chicken I have a really fun recipe for you! And easy, too. It’s hardly any work; the oven does the work for you, but it’s a really fun and tasty way to serve chicken for a change. Serve with an Avocado & Fennel Salad, lots of skillet baked potatoes and a little Green Peppercorn Sauce, but that’s mainly because I’m seriously addicted to how the sauce tastes on potatoes. This was absolutely delicious! Foodbuzz 24, 24, 24: Chinese Buffet at Home It is no secret that I have an obsession with Chinese cuisine. The place that started it all was a local Chinese buffet here in Michigan. After frequent visits to the buffet over the years, I finally decided to take a stab at cooking my own Chinese dishes at home. The majority of the dishes were delicious and I began cooking different Chinese meals every week, but I had always wanted more variety just like the buffet. I had always wondered, “what if I could create a Chinese buffet at home?” I have wanted to do this for along time so I was very excited when I was chosen to be part of the 24,24,24 event presented by Foodbuzz.

London’s Best Farmers' Markets London’s your oyster when it comes to finding mouthwatering produce. We pick the city’s best (and most easily accessible) farmers' markets that specialise in quality, well-sourced wares Vernal abundance at Cabbages and Frocks © Natalie Pecht Central | North | East | South | WestCentralPimlico Road Farmers’ Market Incredibly chi-chi, but not without a bit of eccentricity – sure there are lots of straw hats, tea dresses and wicker baskets, but on our visit a jovial old man was entertaining the market goers with a hearty song played on his battered accordion. Suddenly, it felt like Paris.

Finds: Awesome Cake Designs Posted by C on Wednesday, June 13, 2012 · [via thisisnthappiness.com] I’m not really that big fan of cakes. The other day, I found these really amusing cake designs that make me want to taste one! 100+ Google Tricks That Will Save You Time in School – Eternal Code [via onlinecolleges.net] With classes, homework, and projects–not to mention your social life–time is truly at a premium for you, so why not latch onto the wide world that Google has to offer? From super-effective search tricks to Google hacks specifically for education to tricks and tips for using Gmail, Google Docs, and Google Calendar, these tricks will surely save you some precious time.