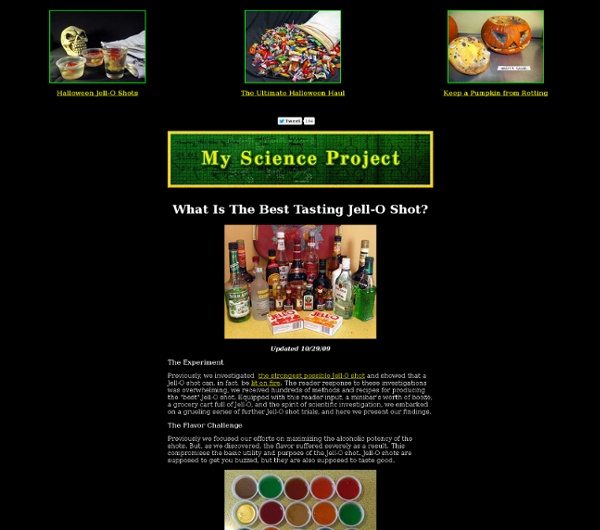 Updated 10/29/09 The Experiment Previously, we investigated the strongest possible Jell-O shotand showed that a Jell-O shot can, in fact, be lit on fire. The reader response to these investigations was overwhelming, we received hundreds of methods and recipes for producing the "best" Jell-O shot. Equipped with this reader input, a minibar’s worth of booze, a grocery cart full of Jell-O, and the spirit of scientific investigation, we embarked on a grueling series of further Jell-O shot trials, and here we present our findings. The Flavor Challenge Previously we focused our efforts on maximizing the alcoholic potency of the shots. In our selection of liquors and recipe combinations, we tried to stick to the basics: liquors and ingredients that were economical and easy to find or likely to be on hand. Start With the Basics Here’s a rundown of some of the best basic Jell-O/liquor combinations that we tried. These shots were prepared by dissolving 3 oz. Our most important finding? Pickled Fruit

Excel tutorial and other stuff Excel Tutorials Excel is easy to use. Most folks can be up and running in just a single session. Yet there is much more to Excel and almost everyone knows. Excel Tools - for the schools Algebra Bar graphs via M&M's - Bar graphs via M&M's (with randomization) Slope and straight lines - drawing lines giving slope and intercept Two point form - given two points the straight line is constructed Straight lines with sliders - letting a slider change slope and intercept Quadratics I - making multiple graphs Quadratics II - making multiple graphs with sliders Making two graphs in one - shows sine and cosine in one graph Quadratic differences - shows how the second differences of a quadratic are constant Converting time - via Excel and several other cool applications Converting time - utility function is modular arithmetic The cannonball trajectory - it goes up and down with controls Fibonacci Numbers - computed and graphed Advanced

30 Useful (and Unknown) Web Apps You Need to Bookmark - Page 1 | At Maximum PC, computer hardware is our bread and butter. We review it, preview it, and just generally love to talk about it. Unfortunately, hardware becomes less important with each passing day, as more and more software moves onto the internet. So to help you prepare for a future in the cloud, we've put together a list of 30 of our favorite web apps and services. ScreenToaster ScreenToaster is a web app designed to make life a whole lot easier for every family’s “computer expert.” OpenTable If you like to eat out, you’ve probably heard of OpenTable. Readitlater Have you ever found yourself wanting to read an online article or blog post, but without the time to actually read it? ConvertCenter Did you know that one bushel is equal to 101.9716 hectoliters? Issuu We may be a print magazine, but we all know the future is digital. Keep reading for more great web apps!

10 Best Sexual Drinking Games | Top Ten Soup Some of the best sexual drinking games can be done either in an intimate setting with only you and your girlfriend or you can make it a party and have multiple people. The ten most commonly played sexual drinking games are: Nine cans of beer or the floor. In this game you will need about nine cans of beer per person, (NOTE: not everyone will finish this game) a shot glass and a time keeper. Every minute for 100 minutes you take a shot of beer. At first that may seem easy enough but when you add it up it comes out to about nine beers in just over an hour and a half. Ever Wonder Why... funny things we all say EVER WONDER... ...why the sun lightens our hair, but darkens our skin? ...why women can't put on mascara with their mouth closed? ...why you don't ever see the headline "Psychic Wins Lottery"? back to...

Crack a Master Combination Padlock Redux - Illustration - Lifeha As a locksmith, I have a responsibility to the public to educate folks on things like this. Sorry, friend, but your initial statement is false, unless you're referring to locks which are not considered padlocks. Even then, certain door-mounted cylinders are susceptible to a variation on this attack. While the introduction of ball-bearings in the locking dog has significantly reduced the percentage of locks with which this attack is effective, it still works on a very large number of cheap padlocks without this particular addition. This was some time ago but if I recall correctly he was talking about prying his combo lock faceplate open (at least that's what I think I was referring to). I do have to admit my response and his post are not that well written so I'm not sure. I just read his post, and it appears to me that he is talking about shimming as it's described in the article. I must also admit that my response was a bit vague.

A Story About â€˜Magic' Some years ago, I (GLS) was snooping around in the cabinets that housed the MIT AI Lab's PDP-10, and noticed a little switch glued to the frame of one cabinet. It was obviously a homebrew job, added by one of the lab's hardware hackers (no one knows who). You don't touch an unknown switch on a computer without knowing what it does, because you might crash the computer. The switch was labeled in a most unhelpful way. I called another hacker over to look at it. It was clear that this switch was someone's idea of a silly joke. Imagine our utter astonishment. A year later, I told this story to yet another hacker, David Moon as I recall. The computer promptly crashed. This time we ran for Richard Greenblatt, a long-time MIT hacker, who was close at hand. We still don't know how the switch crashed the machine. I still have that switch in my basement. 1994: Another explanation of this story has since been offered.

mental_floss Blog » Extreme Weirdness: Antarctica’s “Blood Falls There is a glacier in Antarctica that seems to be weeping a river of blood. It's one of the continent's strangest features, and it's located in one of the continent's strangest places -- the McMurdo Dry Valleys, a huge, ice-free zone and one of the world's harshest deserts. So imagine you're hiking through this -- -- which has been kept ice-less since God was a child because of something called the katabatic winds, which sweep over the valleys at up to 200 mph and suck all the moisture out of them. A bleeding glacier. The source of that water is an intensely salty lake trapped beneath 1,300 feet of ice, and a new study has now found that microbes have carved out a niche for themselves in that inhospitable environment, living on sulfur and iron compounds.