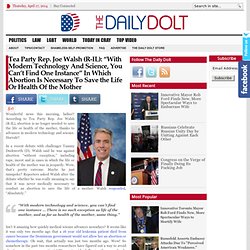 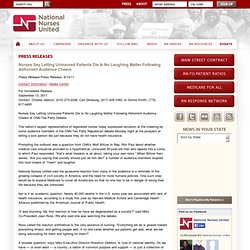 Debt deal: anger and deceit has led the US into a billionaires' coup. There are two ways of cutting a deficit: raising taxes or reducing spending. 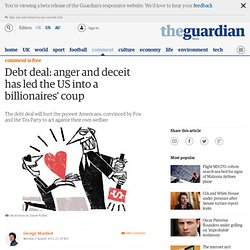 Tea party to GOP: We could make 'examples' of you over debt ceiling. Tea party activists are closely watching the talks over raising the debt ceiling and putting the squeeze on moderate Republicans. Republicans and Democrats are locked in tense negotiations on raising the debt ceilingRepublicans, especially tea party-backed ones, are dead set against a plan to raise revenueTea Party Patriots co-founder: "It's time for Congress to get its fiscal house in order" Washington (CNN) -- Right now, some Republican lawmakers in Washington may be wondering how to wiggle out from between a rock and a hard place. On one hand, they're staring at a possible financial nightmare if the nation's debt limit isn't raised. On the other, many are feeling the heat from tea party demands that bluntly warn: Vote against us and suffer political consequences. But over its 2½-year existence, the tea party movement has placed its banner of less government spending at the center of the national conversation.

Tea-Party-Treading.jpg (JPEG Image, 500x353 pixels) An annotated guide to the economics of Michele Bachmann - How the World Works. The wrong John Wayne. Rep. 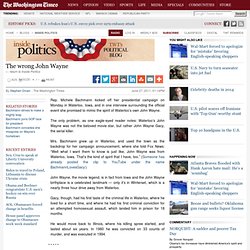 Michele Bachmann kicked off her presidential campaign on Monday in Waterloo, Iowa, and in one interview surrounding the official event she promised to mimic the spirit of Waterloo’s own John Wayne. The only problem, as one eagle-eyed reader notes: Waterloo’s John Wayne was not the beloved movie star, but rather John Wayne Gacy, the serial killer. Mrs. Bachmann grew up in Waterloo, and used the town as the backdrop for her campaign announcement, where she told Fox News: “Well what I want them to know is just like, John Wayne was from Waterloo, Iowa.

That’s the kind of spirit that I have, too.” John Wayne, the movie legend, is in fact from Iowa and the John Wayne birthplace is a celebrated landmark — only it’s in Winterset, which is a nearly three hour drive away from Waterloo. CBS' Bob Schieffer calls out Bachmann for her lies on 'Face The Nation'. She responds by prevaricating. Who steers the Tea Party? Jon Stewart on Palin on Hannity. 44 ’Tea Party Caucus’ Members voted to renew Patriot Act - Los Angeles LA County Libertarian. Fourty four out of the 52 Republican members the official 'Tea Party Caucus' voted to renew expiring provisions of the Patriot Act on February 8th. 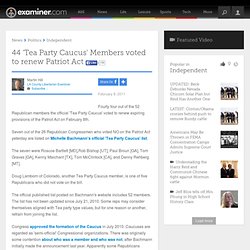 Seven out of the 26 Republican Congressmen who voted NO on the Patriot Act yeterday are listed on Michelle Bachmann's official 'Tea Party Caucus' list. The seven were Roscoe Bartlett [MD],Rob Bishop [UT], Paul Broun [GA], Tom Graves [GA], Kenny Marchant [TX], Tom McClintock [CA], and Denny Rehberg [MT]. Doug Lamborn of Colorado, another Tea Party Caucus member, is one of five Republicans who did not vote on the bill. The official published list posted on Bachmann's website includes 52 members.

The list has not been updated since July 21, 2010. Congress approved the formation of the Caucus in July 2010. Sarah Palin Fans Trying To Rewrite Wikipedia History Of Paul Revere's Ride To Match Her Crazy Version. Sarah Palin’s midnight ride, twice over - The Fact Checker. “We saw where Paul Revere hung out as a teenager, which was something new to learn. 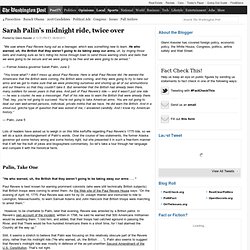 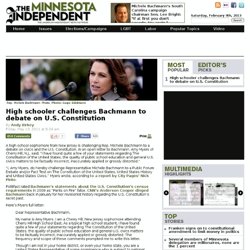 12 Examples of Stunning Hypocrisy from Tea Party Republicans In One Short Month. February 2, 2011 | Like this article? 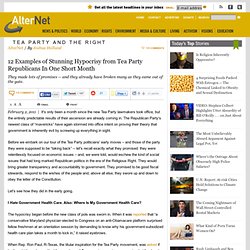 Join our email list: Stay up to date with the latest headlines via email. It's only been a month since the new Tea Party lawmakers took office, but the entirely predictable results of their ascension are already coming in. Why the "birther" myth refuses to die. - By Christopher Beam. The "birther" myth is the political equivalent of a horror-movie villain: Not only does it refuse to die, but every time someone tries to kill it, it only comes back stronger. 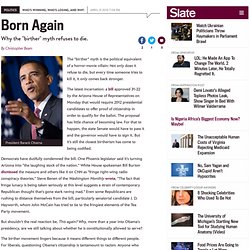 The latest incarnation: a bill approved 31-22 by the Arizona House of Representatives on Monday that would require 2012 presidential candidates to offer proof of citizenship in order to qualify for the ballot. The proposal has little chance of becoming law. Rand Paul Supporter Stomps Head Of Female MoveOn Member Outside KY Debate (VIDEO)

Josh Green flagged an incident that occurred outside of the Rand Paul-Jack Conway debate in Lexington, Kentucky Monday night that's already dominating the news in Kentucky and could easily make headlines nationally. 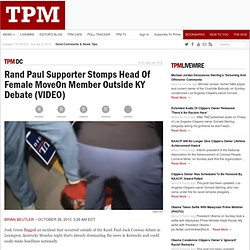 Tea Party ?founder?: Palin, Gingrich a ?joke? By Daniel TencerWednesday, October 20, 2010 22:46 EDT. O'Donnell In 2007: Scientists Have Created Mice With Human Brains! Rand Paul Supporter Tim Profitt Wants Stomping Victim To Apologize To HIM. Tim Profitt, the Rand Paul supporter behind the white sneaker that notoriously stomped on a MoveOn activist's head in Kentucky, sought to play down the importance of the incident Tuesday, and went so far as to ask the victim for an apology. "I don't think it's that big of a deal," Profitt told WKYT. US veteran who killed unarmed Iraqis wins Tea Party support. Tea Party NY Gov Candidate's E-Mails Exposed: Racism, Porn, Bestiality.