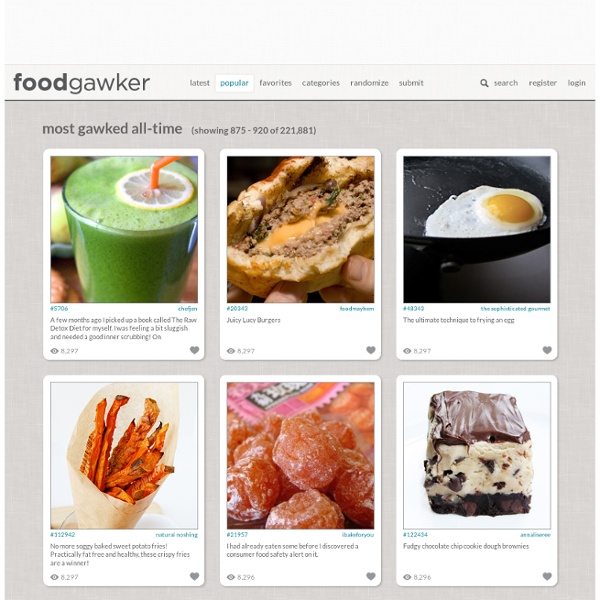 Foodbuzz 24, 24, 24: Chinese Buffet at Home It is no secret that I have an obsession with Chinese cuisine. The place that started it all was a local Chinese buffet here in Michigan. After frequent visits to the buffet over the years, I finally decided to take a stab at cooking my own Chinese dishes at home. The majority of the dishes were delicious and I began cooking different Chinese meals every week, but I had always wanted more variety just like the buffet. I had always wondered, “what if I could create a Chinese buffet at home?” I have wanted to do this for along time so I was very excited when I was chosen to be part of the 24,24,24 event presented by Foodbuzz.

100 Famous Restaurant Recipes Eating out is becoming a more and more popular phenomenon. With fast food taking only minutes out of a day and costing a few dollars, it can be convenient. Likewise, fine dining is also on the rise and can put a considerably larger dent in your wallet. Ryan’s Bolognese Sauce The thing about my recent houseguest Ryan is that he’s an exceptional cook. Bottom line: the guy just flat knows what he’s doing in the kitchen, wrestling pretty much any ingredient to the ground with complete confidence. If he wasn’t a minister, I’d say he missed his calling. But…yeah. I don’t think he did. chocolate banana crepes This past Friday night was meant for celebrating. The weather was sit-out-on-the-deck-in-the-cool-evening-breeze perfection. Friends gathered from all around the city with chips and salsa and salads and popcorn and laughter and stories to share.

Gimme S’more. Sep22 Nothing says fall, bonfires, and gooey deliciousness like a s’more. Nothing. But the thing is, s’mores don’t have to be reserved for special outdoorsy occasions. If you get creative enough you can squeeze them into your daily food pyramid just about anywhere. (And who’s going to say no to that?!)

Pasttata I have never been the biggest fan of quiches or frittatas. They aren't bad, but I would much rather an omelet or just scrambled eggs any day of the week. To me, it is easier and tastier and so why bother with the extra effort a quiche requires? Similarly, my grandmother used to make a baked egg and pasta dish she called pastair (sp?) Roasted Tomato Soup : Cafe Fernando – Food Blog - roasted tomato soup - tomato - tomato soup - tomato soup recipe - Soup October 30th, 2009 | Category: Soup I guess I am a bit late about this roasted tomato soup recipe as the season is over, but better late than never (or next year), right? This roasted tomato soup with goat’s cheese crostini recipe belongs to Gordon Ramsay and was published in his column at Times Online. It has great depth, thanks to roasting the tomatoes with red onions, sea salt, olive oil, fresh thyme and a bit of sugar in the oven.

Caramel Apple Cupcakes September is finally here and all I can think about are all of the apple recipes I want to dig into. I’ve already lit my fall candles to get in the mood since we kind of have to fake the seasons over here in Florida. These caramel apple cupcakes smelled divine baking in the oven! These are super simple using a doctored cake mix but taste just like fall. Easy Recipes We Have Preparation and Cooking Times of 30 Minutes or Less The majority of recipes we offer can be both prepared and cooked in 30 minutes or less, from start to finish. A number of them can also be prepared ahead of time and enjoyed later. So you can prepare more than what is needed for a single meal. Then you can use the additional amount the next day or when time is short, with little or no additional preparation time required.

Braised Sausages with Balsamic Glazed Grapes and Onions While I'm pretty good about cleaning up after myself when cooking at a leisurely (weekend) pace, I've been known to leave quite the debris field in my wake when slamming to get a weeknight meal on the table for the family. And so, my wife loves it when I make a one pot meal on a weeknight, especially one that is as tasty as this one. You see, while we have a rotating schedule of kitchen duties that gives everyone a chance to be a sous-chef, table cleaner, pot washer, or drier, it seems that my wife more often than not swaps duties with one of the kids and finds herself up to her elbows in soap suds cleaning up the mess I've left in the kitchen. Sorry, honey. Imagine her glee then, when she discovered that this meal was not even gonna be a one pot meal for her to clean.

Irish Car Bomb Cupcakes Recipe As I mentioned on Friday, I have been doing some experimentation with the beer and chocolate combination. The Guinness-chocolate ice cream that I made totally kicked butt, so I couldn’t wait to see how I liked beer and chocolate in my cake. The answer? I like it, a whole heck of a lot. This was my first time doing Guinness-chocolate cakes, and I was totally optimistic that I would love it, and I was definitely right. Prawns In Spicy Coconut Sauce recipe at PakiRecipes the Pakistani Recipes collection Do yourself a favor and use canned coconut milk in this recipe. It's a lot easier and probably better than what you would produce using a fresh coconut. Process the grated fresh coconut or the desiccated coconut with 3 1/2 cups hot water in a food processor. Drape a piece of folded cheesecloth over a bowl and pour the coconut mixture into the cheesecloth. Strain the liquid, squeezing the pulp to extract as much milk as possible. This is thick coconut milk; set aside.