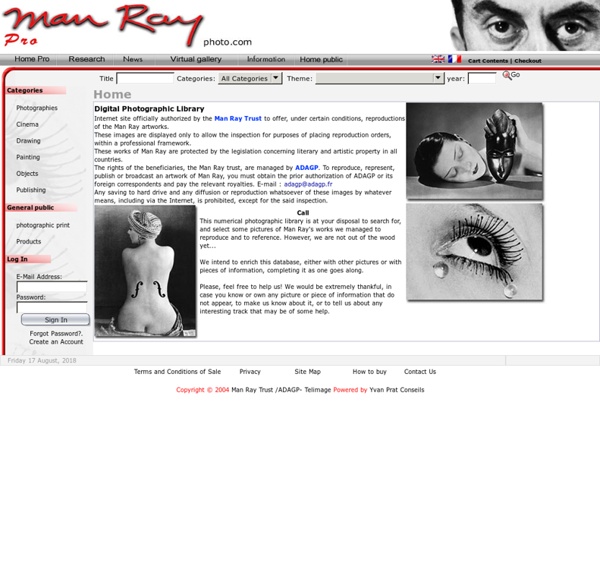 Internet site officially authorized by the Man Ray Trust to offer, under certain conditions, reproductions of the Man Ray artworks. These images are displayed only to allow the inspection for purposes of placing reproduction orders, within a professional framework. These works of Man Ray are protected by the legislation concerning literary and artistic property in all countries. The rights of the beneficiaries, the Man Ray trust, are managed by ADAGP. To reproduce, represent, publish or broadcast an artwork of Man Ray, you must obtain the prior authorization of ADAGP or its foreign correspondents and pay the relevant royalties. E-mail : adagp@adagp.fr Any saving to hard drive and any diffusion or reproduction whatsoever of these images by whatever means, including via the Internet, is prohibited, except for the said inspection.

Annie Liebovitz January 3rd, 2007 Annie Leibovitz Photo Gallery Get access to content from your local PBS station.Get sneak previews from some of your favorite shows including Masterpiece, Nova, etc.See what's on tonight at your local PBS station. The extraordinary story of Erwin Blumenfeld The pioneering fashion photographer Erwin Blumenfeld pushed the boundaries in his art and in his life. Tamsin Blanchard recounts his extraordinary story. BY Tamsin Blanchard | 18 May 2013 Lisa Fonssagrives on the Eiffel Tower, 1939, Paris, by Erwin Blumenfeld. Annie Liebovitz Born in 1949 in Waterbury, Connecticut, Annie Leibovitz enrolled in the San Francisco Art Institute intent on studying painting. It was not until she traveled to Japan with her mother the summer after her sophomore year that she discovered her interest in taking photographs. When she returned to San Francisco that fall, she began taking night classes in photography. Time spent on a kibbutz in Israel allowed her to hone her skills further.

Photographs Do Not Bend: contemporary photographers Archives Research: Sam Taylor Wood, Still Life (video stills), 2001 In the arts, vanitas is a type of symbolic work of art especially associated with Northern European still life in Flanders and the Netherlands in the 16th and 17th centuries though also common in other places and periods. The word is Latin, meaning "emptiness" and loosely translated corresponds to the meaninglessness of earthly life and the transient nature of Vanity. Robert Frank Robert Frank's fine flatulent black joke on American politics can be read as either farce or anguished protest. It is possible that Frank himself was not sure which he meant. In 1956, he was still a relative newcomer to the United States, and his basic reaction might well have been one of dumb amazement as he investigated the gaudy insanities and strangely touching contradictions of American culture. A similar shock has been experienced by many others who have been suddenly transplanted as adults to this exotic soil. A few artists and intellectuals have even managed to turn the experience to their creative advantage, if their direction had not yet been too firmly set, as though a new country might be a substitute for being born again.

Holden Luntz Gallery Gilbert Garcin’s meditative images are striking in their symbolic power and their skillful blend of humor and gravity. Through Garcin’s poetic and philosophical scenes, he enables us to become better observers of our human condition; he speaks of all people while he tells of himself. By considering the hidden side of life and raising questions concerning aspects of life, such as the transience nature of our existence or the tenacity one needs to keep going, Garcin uses himself as a model of the everyman to present a resource for meditation on life’s little absurdities and the significance of the human condition. These profound and masterful compositions are from a Marseilles lamp factory owner who first delved into the photographic arts at the age of 65. It was at this late time that he met photographer Pascal Dolesmieux at a workshop in Arles and Dolesmieux immediately sparked Garcin’s fascination with photography by tutoring him in the trade.

In Memory of Photographers We Lost in 2011 They went by several different names. James Atherton was a “news photographer” while Tim Hetherington preferred “image maker.” We just call them photographers. They make images, yes, often connected with the news. But they actually record the world–in all of its beauty, horror, pain and confusion–at a particular time and place. For three of the photographers who were killed covering the civil war in Libya this year, the uprising to oust Muammar Gaddafi was far from their first experience in combat.

SALGADO'S ETHIOPIA Up on the plateau in northern Ethiopia, life has barely changed in thousands of years. Sebastião Salgado spent two months walking in the mountains to catch the intricacies of the landscape. Text by Simon Willis In the highlands of northern Ethiopia, the mountains keep insiders in and outsiders out. There is only one main road, and no other access except on foot. For Sebastião Salgado, who took these photographs, this made it a perfect subject.