BACK TO THE FUTURE : Irina Werning 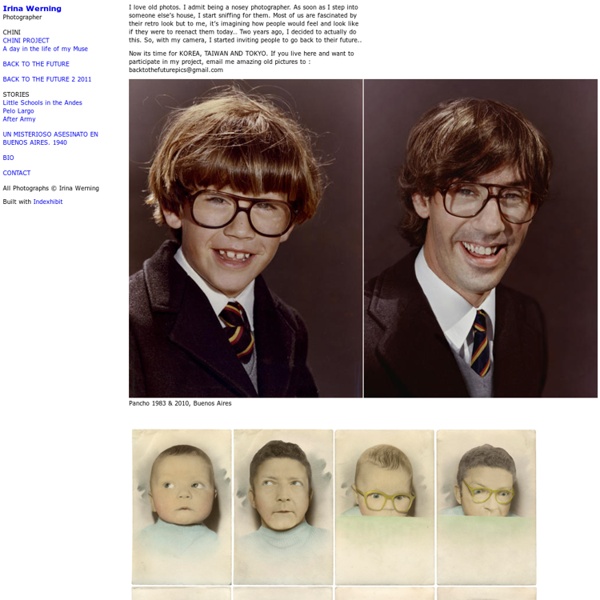 Lignières: Then and Now Move mouse over image for contemporary view; move mouse outside for historical image. If image doesn't change, click image to toggle between “then” and “now” views. The historical photograph is courtesy of M. Werner Löffel of Lignières, who kindly contributed images of his post card collection to the archives of the Fondation de l'Hôtel de Commune de Lignières. Play Wonderputt Check your security settings Connection issues are typically caused by security settings on your network or computer. Check that your firewall or router has port 5222 open and allowing traffic. If you are on a school or office network, you may need to contact your network administrator to make the necessary changes. Is your version of Flash current? Some old versions of Flash don't work well with our new chat application. You can go to to get the newest version.

36 Pictures That Look Photoshopped – But Are Not The power of Photoshop is amazing, but still it doesn’t beat the power of imagination. Although many photos taken by professional photographers and enhanced in Photoshop can be absolutely stunning, the photos taken wisely and in a creative manner are even more impressive. Today’s showcase is dedicated to such photos, the ones that make people skeptical about not being manipulated and still they are genuine and impressive. They can be really inspiring and a pride to every photographer’s portofolio, no matter if they are funny, dramatic or just miracles of nature. Salar de Uyuni sidewalk chalk guy sidewalk chalk guy «« back to gprime.net all material copyrighted by its original creator | Earth from Above a collection of aerial photography "Earth From Above" is the result of the aerial photographer Yann Arthus-Bertrand's five-year airborne odyssey across six continents. It's a spectacular presentation of large scale photographs of astonishing natural landscapes. Every stunning aerial photograph tells a story about our changing planet. Coal mine in South Africa Sha Kibbutz, Israel

BACK TO THE FUTURE 2 2011 : Irina Werning Now its time for KOREA, TAIWAN AND TOKYO. If you live here and want to participate in my project, email me amazing old pictures to : backtothefuturepics@gmail.com Riff Raff 1976 & 2011 London Black macaque takes self-portrait: Monkey borrows photographer's camera By Daily Mail Reporter Created: 10:08 GMT, 4 July 2011 To capture the perfect wildlife image, you usually have to be in exactly the right place at precisely the right time. But in this instance, David Slater wasn’t there at all and he still got a result. Visiting a national park in North Sulawesi, Indonesia, award-winning photographer Mr Slater left his camera unattended for a while.

The most compelling ones for me are the groups and how they still can emulate the relationships with ease - especially the mother with child. by thatkypieguy Apr 27

that was seriously fascinating. i loved the ones that had the same houses and backgrounds, or the same clothes years later. by stacyleepatton Apr 27