Texas republicans support a vote on whether or not to secede from US . Discussion takes place in r/JoeRogan . Goes as well as expected . : SubredditDrama. Selling all my crypto because of an authoritarian government : CryptoCurrency. U/BaldKnobber123 explains how the modern christian movement in the US was helped formed by corporations. : bestof. Shots fired! □ : PoliticalHumor. DOJ Considers Serious Charges Against Capitol Rioters. At least 170 people are currently under investigation in connection to the January 6 assault on the U.S. 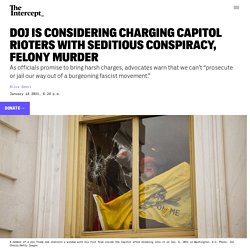 Capitol, and officials expect that number to “grow to the hundreds in the next coming weeks” — a criminal probe that the top federal prosecutor in Washington, D.C., has described as “unprecedented, not only in FBI history, but probably DOJ history.” Some 111 people were arrested or charged for actions connected to the Capitol siege as of Thursday morning, according to the Prosecution Project, an open-source research platform that monitors criminal cases involving political violence.

Acting U.S. Attorney for the District of Columbia Michael Sherwin said that prosecutors were considering a growing set of charges against those involved in the riot. “I don’t see how we can prosecute or jail our way out of a burgeoning fascist movement in the United States.” U.S. Photo: Tasos Katopodis/Getty Images Uneven Response Intelligence Failures Photo: Brendan Smialowski/AFP via Getty Images. Capitol Mob Has Roots in Anti-Lockdown Protests.

Donors to Tea Party Pre-Riot Rally Organizers Revealed. Donors to the Tea Party Patriots Foundation, one of the groups that helped organize the January 6 rally preceding the deadly attack on the U.S. 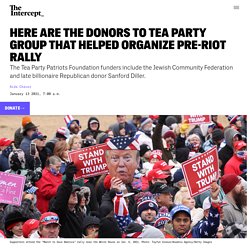 Capitol, include the Jewish Community Federation and late billionaire Republican donor Sanford Diller, according to a 990 form submitted to the IRS by the tax-exempt nonprofit in 2019. The right-wing organization was listed on the March to Save America website alongside groups like Stop the Steal, Turning Point Action (an affiliate of Turning Point USA), and Women for America First, according to a report last week from Documented, a watchdog group that investigates corporate influence. The March to Save America website is down, but archived versions list several participating organizations.

Supporters of President Donald Trump gathered for a mass event outside the Capitol last week, aiming to coincide with challenges to Joe Biden’s Electoral College victory. How the Mercers Funded Election Unrest. The storming of the U.S. 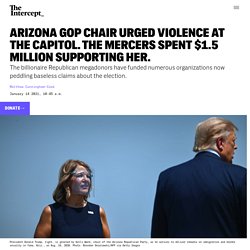 Capitol on January 6 has brought to the fore a host of activists on the extreme right whose violent rhetoric helped to create the conditions for an assault that left five dead. One of the most prominent of those activists is Arizona Republican Party Chair Kelli Ward. On December 19, Ward fired off a tweet urging President Donald Trump to “cross the Rubicon,” referring to the historical event that led to Julius Caesar declaring a dictatorship in ancient Rome. 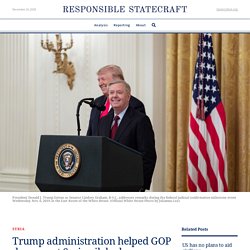 Sen. Lindsey Graham (R–S.C.) first announced in July that U.S. -backed, Kurdish-led forces had granted an American company a deal to “to modernize the oil fields” in areas of northeastern Syria guarded by U.S. troops. Special Envoy Joel Rayburn confirmed during Wednesday’s House Foreign Affairs Committee hearing that the company is Delta Crescent Energy, a little-known firm cofounded by several people who have donated to Republican causes, including Graham’s own campaign. The U.S. Spent $11.6B to Stop Cocaine Trafficking. It Was a Massive Failure. MEDELLÍN, Colombia - A new report authored by former members of President Barack Obama’s administration says that the U.S’ decades-old anti-narcotics foreign policy is a “failure.” 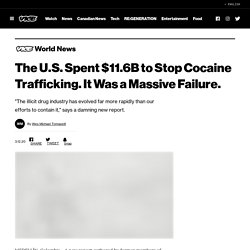 “While Plan Colombia was a counterinsurgency success, it was a counternarcotics failure,” says the report, which was released this week by U.S. Representative Eliot L. Engel, chairman of the House Committee on Foreign Affairs. “Now even counterinsurgency gains are receding as armed groups step up attacks on civilians.” The report heightens hopes from those lobbying for a change to the status quo of the drug war for the incoming administration of President-elect Joe Biden to reform U.S. drug policy abroad. Two former Latin America foreign policy advisers who served when Biden was vice president - Juan Gonzalez and Dan Restrepo - are the co-authors of the investigation. Microsoft 365 has employee surveillance and analytics built in. People react, but their reaction is channeled into a false dichotomy. 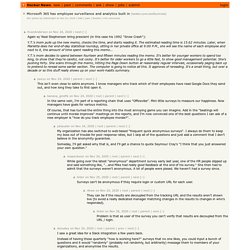 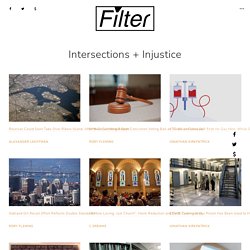 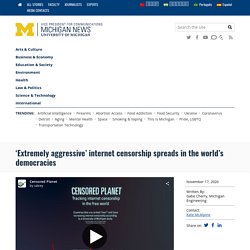 The University of Michigan team used its own Censored Planet tool, an automated censorship tracking system launched in 2018, to collect more than 21 billion measurements over 20 months in 221 countries. They recently presented a paper on the findings at the 2020 ACM Conference on Computer and Communications Security. “We hope that the continued publication of Censored Planet data will enable researchers to continuously monitor the deployment of network interference technologies, track policy changes in censoring nations, and better understand the targets of interference,” said Roya Ensafi, U-M assistant professor of electrical engineering and computer science who led the development of the tool.

Poland blocked human rights sites; India same-sex dating sites. Murdoch Family Tries to Dodge Backlash for Fox News. Corporations directing our attention online more than we realize. CHAMPAIGN, Ill. -- We know how search engines can favor certain results and how social media might push us into bubbles, but it's still easy to view the internet as a place where we're in control. 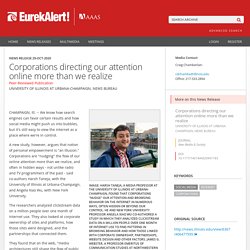 A new study, however, argues that notion of personal empowerment is "an illusion. " Corporations are "nudging" the flow of our online attention more than we realize, and often in hidden ways - not unlike radio and TV programmers of the past - said co-authors Harsh Taneja, with the University of Illinois at Urbana-Champaign, and Angela Xiao Wu, with New York University. I am Aubrey Cottle a.k.a. Kirtaner. I am the founder of the hacker collective "Anonymous". Yes. Really. Ask me anything. : IAmA. I'm done playing games @RQueenInc. No evidence NSA collecting phone records stopped terror attacks: court - Business Insider. Why China's Race For AI Dominance Depends On Math. THE WORLD first took notice of Beijing’s prowess in artificial intelligence (AI) in late 2017, when BBC reporter John Sudworth, hiding in a remote southwestern city, was located by China’s CCTV system in just seven minutes. 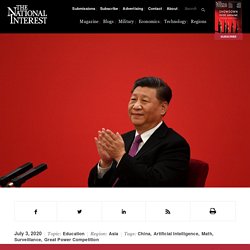 At the time, it was a shocking demonstration of power. Today, companies like YITU Technology and Megvii, leaders in facial recognition technology, have compressed those seven minutes into mere seconds. Steve Hotze asked Texas Gov. Greg Abbott to order rioters be killed. In the days after George Floyd's death in police custody in Minneapolis last month, as massive protests against police brutality spread across Texas and other states, conservative power broker Steve Hotze of Houston called Gov. Greg Abbott's chief of staff to pass along a message. "I want you to give a message to the governor," Hotze told Abbott's chief of staff, Luis Saenz, in a voicemail. Australian Strategic Policy Institute. Since 2017, more than a million Uyghurs and members of other Turkic Muslim minorities have disappeared into a vast network of ‘re-education camps’ in the far west region of Xinjiang,10 in what some experts call a systematic, government-led program of cultural genocide.11 Inside the camps, detainees are subjected to political indoctrination, forced to renounce their religion and culture and, in some instances, reportedly subjected to torture.12 In the name of combating ‘religious extremism’,13 Chinese authorities have been actively remoulding the Muslim population in the image of China’s Han ethnic majority.

The Australian Strategic Policy Institute (ASPI) has identified 27 factories in nine Chinese provinces that are using Uyghur labour transferred from Xinjiang since 2017. Trump's Biblical Spectacle Outside St. John's Church. Megathread: President Donald Trump Mobilizes Military Amid National Unrest : politics. The Washington Post puts a price on data privacy in its GDPR response - and tests requirements. Some U.S. publishers have blocked visitors from the E.U. to their sites rather than comply with the wide-ranging General Data Protection Regulation to protect people’s online privacy.

Sinclair Agrees to Pay Record $48 Million Penalty - Broadcasting & Cable. Who’s Behind the ‘Reopen’ Protests? I first became aware of the political influence of Charles and David Koch in 2009 when I started looking into who was behind the protests at health care town halls. The Tea Party, formed after America elected its first black president, used a series of health care town halls to spur angry Republicans to oppose the Affordable Care Act as a socialist takeover of American medicine. Who’s Behind the “Reopen” Domain Surge?

Two Santa Clauses or How The Republican Party Has Conned America for Thirty Years. This weekend, House Republican leader John Boehner played out the role of Jude Wanniski on NBC's "Meet The Press. " Odds are you've never heard of Jude, but without him Reagan never would have become a "successful" president, Republicans never would have taken control of the House or Senate, Bill Clinton never would have been impeached, and neither George Bush would have been president. Gilens and page 2014 testing theories of american politics. The 2020 Election Will Be a War of Disinformation. Trump campaign aims to duplicate 2016 edge on voter data in 2020. The Republican Party has collected 3,000 data points on every voter in the country, say GOP officials. This technological treasure will allow President Donald Trump’s reelection effort to target potential supporters with mail, phone calls, and even door-knock scripts tailored to individuals’ interests.

Deliberate dumbing down. Chinese Officials With Government Access To Every Kind Of Personal Data Are Selling It Online. Back in 2015, Techdirt wrote about a government project in China that involves "citizen scores," a rating system that will serve as a measure of a person's political compliance. Notorious Mercenary Erik Prince Is Advising Trump From the Shadows. We Can’t Let John Deere Destroy the Very Idea of Ownership. This Infographic Shows How Only 10 Companies Control All the World's Brands. This Twitter bot is tracking dictators' flights in and out of Geneva - The Verge. Millions of California Public Records Have Been Shredded With No One Really Watching. Trans-Pacific Partnership (TPP): The Terrible Plutocratic Plan.

UW study shows direct brain interface between humans. Who Owns the Media? The amazing, surprising, Africa-driven demographic future of the Earth, in 9 charts. Watch Facebook Take Over The World In These Extremely Trippy Illustrations. IZA World of Labor - Wage compression and the gender pay gap. 10 Companies That Control What We Buy. Companies That Control the World’s Food - Mondelez International (NASDAQ:MDLZ)