Just Fooling Around, Seeing What will come up

Brain-cleaning sleeping cap gets US Army funding. Genetically modified mosquitoes have landed in the Keys. Here’s what you need to know ｜ Miami Herald. More than 20 million genetically modified mosquitoes are coming to the Florida Keys this year, in a landmark project by British biotech company Oxitec and Monroe County’s Mosquito Control District. 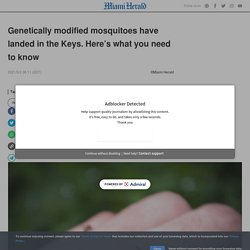 This mosquito control method hasn’t been used in the U.S. before. It’s a pilot program and the first trial began over the past week. The project is aimed at reducing the population of the invasive Aedes aegypti, which carries diseases like Zika. This is the first time in the country that the U.S. Environmental Protection Agency has issued the “experimental use permit” for this method. Tailor-made light passes through opaque obstacles like they're not there. Scientists Engineer New 'Living Materials' by Hacking The Basis of Kombucha. Scientists have created new kinds of 'living materials' by tweaking the base ingredients of kombucha – the popular tea drink fermented with a symbiotic culture of bacteria and yeast (aka SCOBY). 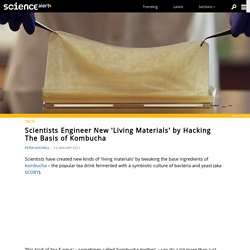 Scientists grew bigger monkey brains with a human gene. Our big brains set us apart from other primates. 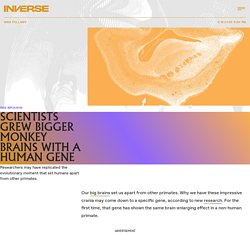 Why we have these impressive crania may come down to a specific gene, according to new research. For the first time, that gene has shown the same brain-enlarging effect in a non-human primate. Researchers in Germany and Japan introduced a human-specific gene to the fetuses of common marmosets, Callithrix jacchus. In turn, that gene, displayed at typical human levels, caused the monkeys' brains to grow larger than usual. This extraordinary finding was published Thursday in the journal Science. Strange hexagonal form of table salt discovered.

Lab-Made? SARS-CoV-2 Genealogy Through the Lens of Gain-of-Function Research. If you hear anyone claim “we know the virus didn’t come from a lab”, don’t buy it — it may well have. 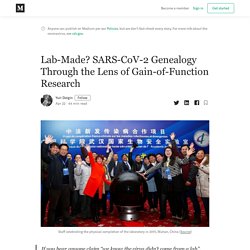 Scientists Use Yeast to Produce Cannabinoids THC and CBD. World-first electrical stimulation device blazes a new trail into the brain. Scientists inject one snail's memories into another's brain. Learning new things would be so much easier if we could just download them into our brains, like in The Matrix. 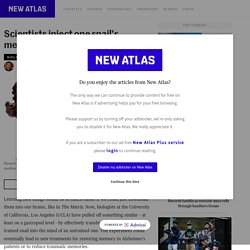 Now, biologists at the University of California, Los Angeles (UCLA) have pulled off something similar – at least on a gastropod level – by effectively transferring a memory from a trained snail into the mind of an untrained one. The experiment could eventually lead to new treatments for restoring memory in Alzheimer's patients or to reduce traumatic memories. The researchers studied a species of marine snail known as Aplysia. These are commonly used as animal models for neuroscience because the cellular and molecular processes at work are relatively similar to humans, but they have a far more manageable number of neurons – about 20,000, compared to our 100 billion.

Researchers develop portable 3-D skin printer to repair deep wounds. How nanobionic spinach plants can detect explosives. The strength of spinach isn't only in its nutrients, but also in its ability to be hacked to function as a sensor, according to researchers at the Massachusetts Institute of Technology. 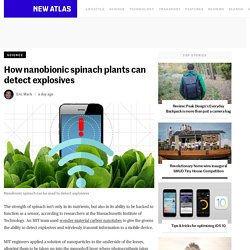 An MIT team used wonder-material carbon nanotubes to give the greens the ability to detect explosives and wirelessly transmit information to a mobile device. Brainjacking – a new cyber-security threat. We live in an interconnected age where wirelessly controlled computing devices make almost every aspect of our lives easier, but they also make us vulnerable to cyber-security attacks. 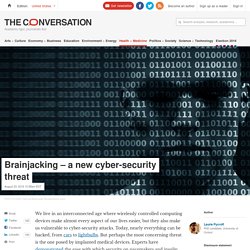 Today, nearly everything can be hacked, from cars to lightbulbs. But perhaps the most concerning threat is the one posed by implanted medical devices. Scientists grow human embryo in lab for nearly two full weeks. Studying the way a human embryo grows in its earliest stages can have a significant impact on in vitro fertilization methods as well as on our understanding of how diseases develop when life is just getting started. 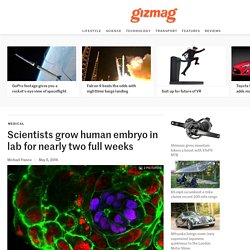 However, it's always been necessary to put lab-fertilized embryos back in the womb after seven days in order for them to attach and successfully develop into fetuses. Researchers at the University of Cambridge (UC) have now nearly doubled that time, allowing an embryo to grow in the lab for a full 13 days. One of the major reasons why in vitro fertilization procedures can fail is that the lab-fertilized egg can fail to attach to the uterine wall when it is placed back inside the womb.

Exactly why this occurs has been hard to understand because of the limit on how long embryos could be allowed to develop outside the body while remaining viable. Source: University of Cambridge. Scientists can now make their own molecules. Sometimes, if you want something made right, you've just got to make it yourself. 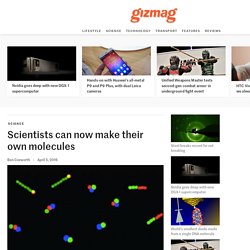 That could certainly be the case when using molecules to construct microscopic devices such as medication-delivering nano-robots. It was with such applications in mind that scientists from ETH Zurich and IBM recently developed a process for building custom molecules from mix-n-match components. Low-cost "Paper Skin" boasts same sensory functions as the real thing. Multipurpose sensors that are both flexible and wearable could one day be used for everything from monitoring the body's vital signs to changing the way we interact with computers. 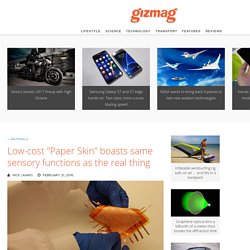 Working toward this goal, researchers in Saudi Arabia have used low-cost everyday items that you probably have laying around your house to develop a paper-based sensor that reacts to the same stimuli as human skin, such as pressure, touch and temperature. While there are plenty of devices around that can track things like pressure, humidity and temperature on their own, fashioning one that can replicate the various sensory functions of human skin has been a little more elusive. Vomiting machine projects better understanding of how stomach bugs spread.

Norovirus is a nasty bug that brings about inflammation in the stomach and intestines leading to pain, nausea, diarrhea and sometimes even death. It affects around 20 million people per year in the US, but despite its rampant nature, questions remain over how exactly it is transmitted. To shed further light on how one of the world's most common pathogens spreads between humans, scientists have built a vomiting machine to study its behaviour when projected into the air. Earlier studies have indicated that norovirus can become aerosolized when a person vomits. This means that particles containing the virus can become airborne post-puke, lingering threateningly in the air or on surfaces ready to infect innocent bystanders. But these have only really been suspicions rather than proven scientific fact, so a team from North Carolina (NC) State University went searching for more concrete answers. The team's research was published this week in the journal PLOS One.

Huffingtonpost. This Device Brings “Brave New World” to Life. Has a Finnish Company Found a Cure for Jet Lag? Scientists create world's first fully-artificial molecular pump. All living organisms – human, animal, or otherwise – continuously move molecules around their cells. It's a crucial mechanism of life, vital for feeding cells the proteins they need to function. And now scientists at Northwestern University have created a machine that mimics this pumping mechanism. Their molecular pump is the world's first such machine developed entirely through chemical engineering in the laboratory, and it could one day power artificial muscles and other molecular machines. "Our molecular pump is radical chemistry – an ingenious way of transferring energy from molecule to molecule, the way nature does," said study senior author Sir Fraser Stoddart.

Check out the big brain on the genetically modified mouse. The mouse embryo developed a giant brain after being injected with the human version of a DNA sequence called HARE5 (Image: Silver lab, Duke University) How to unboil an egg. A team of scientists led by UC Irvine has shown that you can unboil an egg, or at least egg whites ... but it isn't easy. Far more than a breakfast table trick, the feat is designed to demonstrate a new technique for recovering valuable molecular proteins quickly and cheaply that could have important biochemical applications. Frankenstein Can’t Come Out And Play Today. In the standard Frankenstein story, a scientist creates an unnatural monster that breaks out of the lab and runs amok. Scientists Put A Worm's Mind Into A Robot's Body.

Combining The DNA Of Three People Raises Ethical Questions. U.S. scientists have created an entirely new lifeform using artificial DNA. 'Vampire therapy' could reverse ageing, scientists find. In parallel research, scientists at Harvard University also discovered that a ‘youth protein’ which circulates in the blood is responsible for keeping the brain and muscles young and strong. The protein, known as ‘GDF11’, is present in the bloodstream in large quantities when we are young but peters out as we age. 9 Modern Day Dr. Frankensteins. There have been many mad scientists over the years that have done both wonderful (and horrible) experiments on humans and animals.