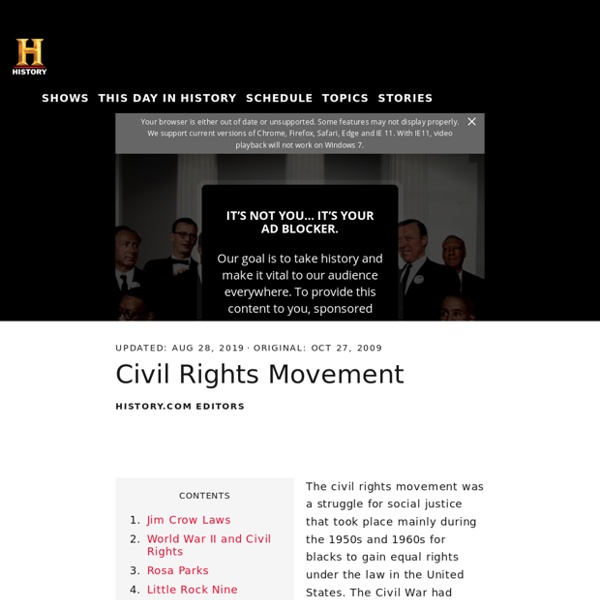 The civil rights movement was a struggle for social justice that took place mainly during the 1950s and 1960s for blacks to gain equal rights under the law in the United States. The Civil War had officially abolished slavery, but it didn’t end discrimination against blacks—they continued to endure the devastating effects of racism, especially in the South. By the mid-20th century, African Americans had had more than enough of prejudice and violence against them. They, along with many whites, mobilized and began an unprecedented fight for equality that spanned two decades. Jim Crow Laws During Reconstruction, blacks took on leadership roles like never before. In 1868, the 14th Amendment to the Constitution gave blacks equal protection under the law. To marginalize blacks, keep them separate from whites and erase the progress they’d made during Reconstruction, “Jim Crow” laws were established in the South beginning in the late 19th century. World War II and Civil Rights Rosa Parks Sources

African Success : Biography of Kevin CARTER South Africa > Media : Kevin CARTER Click on a picture to enlarge Born on 13/09/1960 (format : day/month/year) Biography : Kevin Carter born September 13, 1960- Died July 27, 1994, was a South african award winning photojournalist and member of the Bang Bang Club. Say it Plain, Say it Loud Spanning the 20th century, this collection is a vivid account of how African Americans sounded the charge against racial injustice, exhorting the country to live up to its democratic principles. Download Say it Plain Booker T. Washington A former slave and the most influential African American at the turn of the 20th century Marcus Garvey

Bulgaria Coordinates: Bulgaria i/bʌlˈɡɛəriə/ (Bulgarian: България, IPA: [bɐɫˈɡarijɐ]), officially the Republic of Bulgaria (Bulgarian: Република България, IPA: [rɛˈpublikɐ bɐɫˈɡarijɐ]), is a country located in south-eastern Europe. It is bordered by Romania to the north, Serbia and Macedonia to the west, Greece and Turkey to the south, and the Black Sea to the east. With a territory of 110,994 square kilometres (42,855 sq mi), Bulgaria is Europe's 14th-largest country.

School Integration Webpicks – Speakeasy News Brown v. the Board of Education in 1954 is remembered in the U.S. as a landmark moment in the fight for civil rights. The segregated school that seven-year-old Linda Brown attended while the case for desegregation made its way through the courts is now a National Park Service Historic Site. These videos and websites are useful for covering this topic in class. This video is from the National Park Service Brown vs Board of Education Historic Site in Topeka, Kansas. The Universal Declaration of Human Rights The Universal Declaration of Human Rights, which was adopted by the UN General Assembly on 10 December 1948, was the result of the experience of the Second World War. With the end of that war, and the creation of the United Nations, the international community vowed never again to allow atrocities like those of that conflict happen again. World leaders decided to complement the UN Charter with a road map to guarantee the rights of every individual everywhere. The document they considered, and which would later become the Universal Declaration of Human Rights, was taken up at the first session of the General Assembly in 1946. The Assembly reviewed this draft Declaration on Fundamental Human Rights and Freedoms and transmitted it to the Economic and Social Council "for reference to the Commission on Human Rights for consideration . . . in its preparation of an international bill of rights." The Commission met for the first time in 1947.

Jim Crow Segregation: The Difficult and Anti-Democratic Work of White Supremacy Abstract Segregation contradicts what most students have learned about American freedom and democracy. Textbooks discuss de jure [in law] segregation as a great inconvenience that began in the 1890s and soon spread to every aspect of Southern daily life. Most routinely ignore: segregation's economic dimensions and long-term impact;black community activism;interracial efforts to contest the status quo; andthe violence and terrorism necessary to uphold it. Textbooks that portray segregation as a prelude to a more celebratory narrative of the civil rights era collapse the history of earlier generations of African Americans into a monolithic victimhood.

12 free and printable Black Lives Matter posters from Black artists - Social Good With the fight for racial justice renewed following the police killings of Breonna Taylor, George Floyd, and many other Black people at the hands of officers, showing support for the Black Lives Matter movement and demanding systemic change can be done in many ways. Whether you're demanding justice at a protest, donating to end police brutality, or furthering your education through books and films, there are plenty of ways to be an effective ally online, at protests, and moving forward. You can also support and amplify the work of Black artists, like a new project from Bulgarian nonprofit group Fine Acts, which brings together activists and creatives for social good campaigns. The group's latest project invited 12 Black artists and typographers to create a collection of 24 posters — "one for each hour of the day with systemic anti-Black racism," according to the organisation — ready to be used in support of the Black Lives Matter movement.

Sleep Stranger Compassion. This man has it. When Isaac Theil let a sleepy stranger take a little catnap on his shoulder, it was because "I simply remembered the times my own head would bop on someone’s shoulder because I was so tired after a long day," he recounted to Tova Ross of Tablet Magazine. Another subway rider was so struck by Theil's nonchalant empathy that he snapped a picture and put it on Reddit, from which it was then posted to Facebook by Charidy. Redditor Braffination wrote, "Heading home on the Q train yesterday when this young black guy nods off on the shoulder of a Jewish man. The man doesn't move a muscle, just lets him stay there.

Mexico Olympics Black Power Protest Video – Speakeasy News The silent protest of two African American athletes on the podium at the 1968 Mexico Olympics was an iconic moment in civil-rights history. We've selected some teaching tools for language classes on the Black Power protest. In 2016, the prestigious Smithsonian opened a new, and long-awaited museum, the National Museum of African American History and Culture. One of the museum's permanent galleries is called Sports: Leveling the Playing Field. Asma Jahangir “…for defending, protecting and promoting human rights in Pakistan and more widely, often in very difficult and complex situations and at great personal risk.” Asma Jahangir is Pakistan’s leading human rights lawyer. For three decades, she has shown incredible courage in defending the most vulnerable Pakistanis – women, children, religious minorities and the poor. Having founded the first legal aid centre in Pakistan in 1986, Jahangir has courageously taken on very complicated cases and won.

Jim Crow in America - Primary Source Set skip navigation Library of Congress Teachers Muralist meticulously writes ‘Black Lives Matter’ on Detroit gallery wall – Motor City Muckraker “Black Lives Matter.” It’s a slogan that has inspired a nationwide movement to call attention to the disproportionate number of unarmed black people killed by police. Over the past few days, Miami-based artist Renda Writer has meticulously written the slogan thousands of times in various sizes on a black cinderblock wall behind N’Namdi Center for Contemporary Arts on Forest between Woodward and John R in Detroit. The mural has already become an attraction as word spreads. “Black lives matter – that’s the truth,” Writer, who is white, told me with an infectious smile Saturday afternoon. “It’s not saying that other lives don’t matter.

‘I Have a Dream' Speech - MLK, Dates & Summary The “I Have a Dream” speech, delivered by Martin Luther King, Jr. before a crowd of some 250,000 people at the 1963 March on Washington, remains one of the most famous speeches in history. Weaving in references to the country’s Founding Fathers and the Bible, King used universal themes to depict the struggles of African Americans before closing with an improvised riff on his dreams of equality. The eloquent speech was immediately recognized as a highlight of the successful protest, and has endured as one of the signature moments of the civil rights movement.