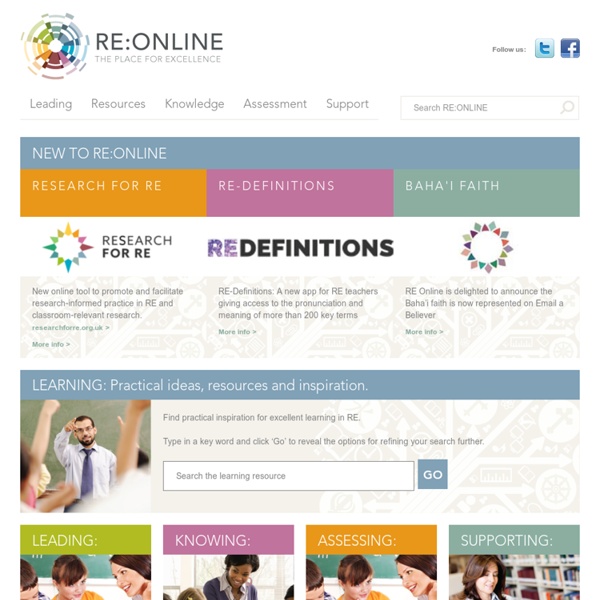 Related:  RE SCHEMES OF WORK • pshe • re minor assignment

Religious Studies The Christmas Story of the Nativity We have produced this illustrated Christmas story of the Birth of Jesus suitable for 6 - 11 year olds. Simple to navigate. Jesus - The Story RE - Islam Teaching Ideas Story of Islam Colouring Book - A colouring story book telling the story of Islam. Contributed by Sherrie Bendjedidi. Islamic Place of Worship - A worksheet containing cloze procedure relating to mosques (answers are given on the activity page). The Five Pillars of Islam - Activities to teach the children about the Five Pillars of Islam.

RE: General resources: Schemes of Work The Hertfordshire Scheme of Work for Primary Religious Education (RE) has been developed to accompany the Hertfordshire Agreed Syllabus for Religious Education: Hertfordshire Agreed Syllabus for RE Also see teaching resources developed to support the Hertfordshire Scheme of Work: What Kids Say About: Arguing Listen People don't always get along, and when they don't, it's called conflict. We wanted to know more the arguments and disagreements kids have, so we did a KidsPoll to find out. We asked 1,245 boys and girls ages 9 to 13 about conflict and here's what they said:

Standing Advisory Council for Religious Education (SACRE) What this committee does Since 1988 local authorities have had a duty to establish a Standing Advisory Council for Religious Education (SACRE). Religious education is a statutory part of the basic curriculum for all pupils, but it is not a National Curriculum subject. East Riding of Yorkshire RE - Teaching & Learning - Schemes of Work Schemes of Work Below is a series of teaching units and schemes of work which have been designed to ensure complete coverage of the East Riding Agreed Syllabus 2005. The new resources are here for download, to support a CD ROM version which has been sent to East Riding of Yorkshire Schools. They include the statutory objectives from the Syllabus, together with some suggested teaching activities which address these. They also give background information, useful resources and expectations of pupils' attainment.

Rights Respecting Schools Now in its second year, OutRight is about empowering children and young people at Rights Respecting Schools to play a role in the realisation of their rights and to speak out in support of all children's rights. OutRight celebrates the UN Convention on the Rights of the Child and takes place on the anniversary of the Convention on 20 November. This year OutRight will focus on children's rights in humanitarian emergencies - empowering children to speak out and share their views on protecting children affected by these crises. Find out all about OutRight 2015 Why is religious education (RE) important? Religious education (RE) makes a distinctive contribution to a balanced and broadly-based school curriculum which: promotes the spiritual, moral, social, cultural, mental and physical development of pupils and of society; andprepares pupils for the opportunities, responsibilities and experiences of later life. Religion and beliefs inform our values and are reflected in what we say and how we behave. Religious education provokes challenging questions about the ultimate meaning and purpose of life, beliefs about God, the self and the nature of reality, issues of right and wrong and what it means to be human. It develops pupils' knowledge and understanding of the nature of religion and belief including Christianity, other principal religions, other religious traditions, and world views that offer answers to these challenging questions.

The Religious Education CPD Handbook Introduction Reviewing or creating a scheme of work can often feel like such a daunting task that many subject leaders simply avoid it altogether and continue with a particular programme, long after it has passed its useful life. Another reason for avoidance is that teaching to a familiar scheme may feel comfortable and require less preparation in terms of teaching and assessment. At the other extreme, some subject leaders spend so much time writing detailed schemes from scratch that they have no time for any other part of their role. There is a real danger here of the teacher becoming exhausted, most commonly in the autumn term when they first take on the leadership role.

Career Advice & Guidance Teaching Resources – icould Are you a teacher, parent, carer, youth worker or careers professional? Many teachers, parents and others who support young people find icould a helpful starting point for talking about careers. With this in mind, we’ve developed a selection of resources to help when using icould with young people, either on an individual or group basis.