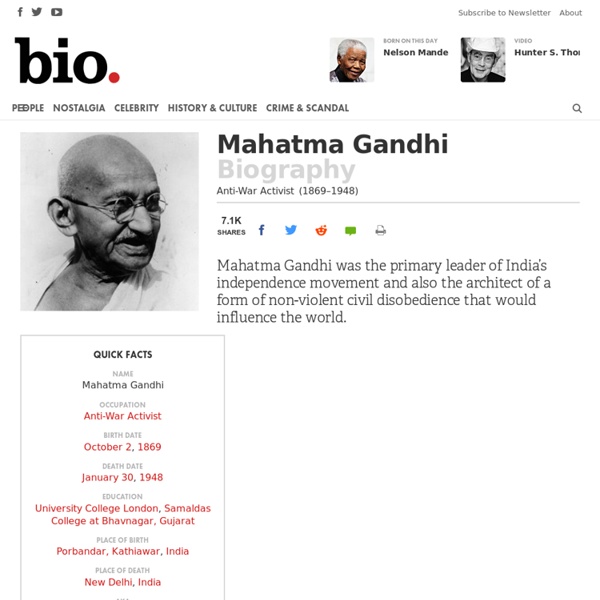 Early Life Indian nationalist leader Mohandas Karamchand Gandhi, more commonly known as Mahatma Gandhi, was born on October 2, 1869, in Porbandar, Kathiawar, India, which was then part of the British Empire. His father, Karamchand Gandhi, served as a chief minister in Porbandar and other states in western India. His mother, Putlibai, was a deeply religious woman who fasted regularly. Young Gandhi was a shy, unremarkable student who was so timid that he slept with the lights on even as a teenager. In 1885, Gandhi endured the passing of his father and shortly after that the death of his young baby. Upon returning to India in 1891, Gandhi learned that his mother had died just weeks earlier. Spiritual and Political Leader When Gandhi arrived in South Africa, he was quickly appalled by the discrimination and racial segregation faced by Indian immigrants at the hands of white British and Boer authorities. Gandhi formed the Natal Indian Congress in 1894 to fight discrimination. The Salt March Related:  Human rights assignment

Desmond Tutu Bishop Desmond Tutu was born in 1931 in Klerksdorp, Transvaal. His father was a teacher, and he himself was educated at Johannesburg Bantu High School. After leaving school he trained first as a teacher at Pretoria Bantu Normal College and in 1954 he graduated from the University of South Africa. After three years as a high school teacher he began to study theology, being ordained as a priest in 1960. Desmond Tutu has formulated his objective as "a democratic and just society without racial divisions", and has set forward the following points as minimum demands: 1. equal civil rights for all 2. the abolition of South Africa's passport laws 3. a common system of education 4. the cessation of forced deportation from South Africa to the so-called "homelands" The South African Council of Churches is a contact organization for the churches of South Africa and functions as a national committee for the World Council of Churches. Copyright © The Nobel Foundation 1984

Mohandas Karamchand Gandhi | biography - Indian leader Gandhi, Mohandas KaramchandAnn Ronan Picture Library/Heritage-Images Mohandas Karamchand Gandhi, byname Mahatma Gandhi (born October 2, 1869, Porbandar, India—died January 30, 1948, Delhi), Indian lawyer, politician, social activist, and writer who became the leader of the nationalist movement against the British rule of India. As such, he came to be considered the father of his country. Gandhi is internationally esteemed for his doctrine of nonviolent protest (satyagraha) to achieve political and social progress. In the eyes of millions of his fellow Indians, Gandhi was the Mahatma (“Great Soul”). Youth Gandhi was the youngest child of his father’s fourth wife. Gandhi’s mother, Putlibai, was completely absorbed in religion, did not care much for finery or jewelry, divided her time between her home and the temple, fasted frequently, and wore herself out in days and nights of nursing whenever there was sickness in the family. “Never again” was his promise to himself after each escapade.

Mahatma: Life of Gandhi, 1869-1948 This is a film which seeks to tell the life-story of Gandhi the Man and his incessant search for Truth. In this world so full of hatred and violence, this man of peace and goodwill fought all evil and injustice with Soul-Force. He stands out as a challenge giving the message of truth and non-violence, of love supreme and unbounded. He is the Mahatma - the Great Soul - the name given to him by the people of India. Gandhi has left an indelible mark on human history. His thought is ever relevant for all those who aspire for a better and fuller life. Animation, live photography and old prints, have been blended to give an integrated image of his life. Even a full-length documentary film is but an inadequate instrument for depicting Gandhi's many-splendoured life and his varied activities. Watch the full documentary now

Martin Luther King Jr. - Biography Martin Luther King, Jr., (January 15, 1929-April 4, 1968) was born Michael Luther King, Jr., but later had his name changed to Martin. His grandfather began the family's long tenure as pastors of the Ebenezer Baptist Church in Atlanta, serving from 1914 to 1931; his father has served from then until the present, and from 1960 until his death Martin Luther acted as co-pastor. Martin Luther attended segregated public schools in Georgia, graduating from high school at the age of fifteen; he received the B. A. degree in 1948 from Morehouse College, a distinguished Negro institution of Atlanta from which both his father and grandfather had graduated. In 1954, Martin Luther King became pastor of the Dexter Avenue Baptist Church in Montgomery, Alabama. In 1957 he was elected president of the Southern Christian Leadership Conference, an organization formed to provide new leadership for the now burgeoning civil rights movement. Selected Bibliography King, Martin Luther, Jr., Strength to Love.

Desmond Tutu - Archbishop - Biography.com Desmond Tutu is a South African Anglican cleric who is known for his role in the opposition to apartheid in South Africa. Synopsis In 1978 Desmond Tutu was appointed general secretary of the South African Council of Churches and became a leading spokesperson for the rights of black South Africans. During the 1980s he played an unrivaled role in drawing national and international attention to the iniquities of apartheid, and in 1984 he won the Nobel Prize for Peace for his efforts. Early Life Desmond Mpilo Tutu was born on October 7, 1931 in Klerksdorp, South Africa. "We knew, yes, we were deprived," he later recalled. Tutu was a bright and curious child with a passion for reading. Tutu graduated from high school in 1950, and although he had been accepted into medical school, his family could not afford the expensive tuition. Rise to Prominence Nevertheless, Tutu became increasingly frustrated with the racism corrupting all aspects of South African life under apartheid. Personal Life

History - Historic Figures: Mohandas Gandhi (1869 - 1948) About Dr. Marshall Rosenberg — Visionary Leader Marshall B. Rosenberg, Ph.D. is the founder and director of educational services for the Center for Nonviolent Communication, an international peacemaking organization. He is the author of Speak Peace in a World of Conflict, the bestselling Nonviolent Communication: A Language of Life, as well as Life-Enriching Education and several NVC booklets. Growing up in a turbulent Detroit neighborhood, Dr. Dr. A sought-after presenter, Rosenberg’s teaching style is both intimate and powerful. With guitar and puppets in hand, a history of traveling to some of the most violent corners of the world, and a spiritual energy that fills a room, Rosenberg is a revolutionary leader we should all watch.

Profile: Malala Yousafzai Image copyright Reuters Pakistani schoolgirl Malala Yousafzai wrote an anonymous diary about life under Taliban rule in north-west Pakistan. She was shot in the head by militants for daring to go to school. Accepting the award in Oslo she said she was "humbled" and proud to be the first Pashtun and the first Pakistani to win the prize. Malala Yousafzai first came to public attention through that heartfelt diary, published on BBC Urdu, which chronicled her desire to remain in education and for girls to have the chance to be educated. When she was shot in the head in October 2012 by a Taliban gunman, she was already well known in Pakistan, but that one shocking act catapulted her to international fame. She survived the dramatic assault, in which a militant boarded her school bus in Pakistan's north-western Swat valley and opened fire, wounding two of her school friends as well. Image copyright Birmingham Hospitals Trust Passionate campaigner Media playback is unsupported on your device

Martin Luther King, Jr. | Biography & Facts Martin Luther King, Jr.American religious leader and civil-rights activist Also known as MLK Jr.Michael Luther King, Jr. born January 15, 1929 Atlanta, Georgia died April 4, 1968 Memphis, Tennessee Martin Luther King, Jr., original name Michael King, Jr. Early years King came from a comfortable middle-class family steeped in the tradition of the Southern black ministry: both his father and maternal grandfather were Baptist preachers. This secure upbringing, however, did not prevent King from experiencing the prejudices then common in the South. In 1944, at age 15, King entered Morehouse College in Atlanta under a special wartime program intended to boost enrollment by admitting promising high-school students like King. At Morehouse, King favoured studies in medicine and law, but these were eclipsed in his senior year by a decision to enter the ministry, as his father had urged. The Montgomery bus boycott In his first speech to the group as its president, King declared: David L. Assessment

Malala Yousafzai - Children's Activist, Women's Rights Activist As a young girl, Malala Yousafzai defied the Taliban in Pakistan and demanded that girls be allowed to receive an education. She was shot in the head by a Taliban gunman in 2012, but survived and went on to receive the Nobel Peace Prize. Synopsis Malala Yousafzai was born on July 12, 1997, in Mingora, Pakistan. Early Life On July 12, 1997, Malala Yousafzai was born in Mingora, Pakistan, located in the country's Swat Valley. Initial Activism Yousafzai attended a school that her father, Ziauddin Yousafzai, had founded. In early 2009, Yousafzai began blogging for the BBC about living under the Taliban's threats to deny her an education. With a growing public platform, Yousafzai continued to speak out about her right, and the right of all women, to an education. Targeted by the Taliban Malala and her family learned that the Taliban had issued a death threat against her because of her activism. The shooting left Malala in critical condition, so she was flown to a military hospital in Peshawar.

Kate Sheppard Kate Sheppard was the leading light of the New Zealand women’s suffrage movement. In recent years her contribution to New Zealand’s identity has been acknowledged on the $10 note and a commemorative stamp. Born in Liverpool in 1847, Kate Malcolm migrated to Christchurch in her early twenties and in 1871 married merchant Walter Sheppard. Sheppard travelled the country, writing to newspapers, holding public meetings and lobbying members of Parliament. In 1893 Kate Sheppard and her fellow suffragists gathered the signatures of nearly 32,000 women to demonstrate the groundswell of support for their cause. Kate Sheppard continued to work at home and abroad for women’s rights – from contraception to freedom from the corset. Sheppard outlived two husbands, her only son, and her only grandchild. By Emma Brewerton Read the full biography in Te Ara Biographies