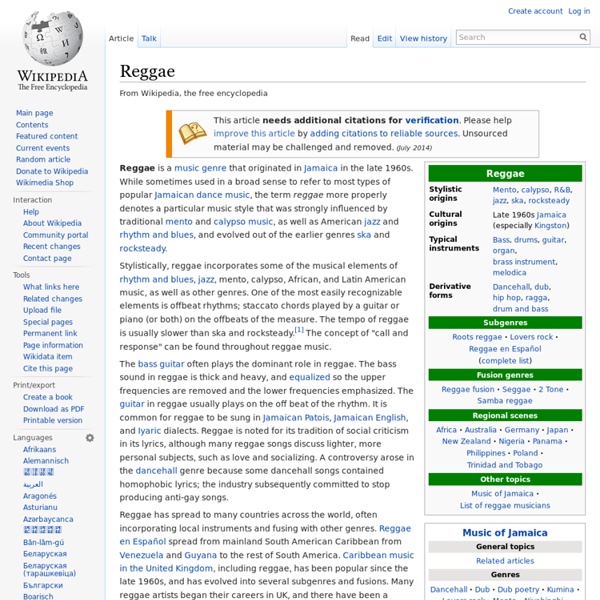 Reggae is a music genre that originated in Jamaica in the late 1960s. While sometimes used in a broad sense to refer to most types of popular Jamaican dance music, the term reggae more properly denotes a particular music style that was strongly influenced by traditional mento and calypso music, as well as American jazz and rhythm and blues, and evolved out of the earlier genres ska and rocksteady. Stylistically, reggae incorporates some of the musical elements of rhythm and blues, jazz, mento, calypso, African, and Latin American music, as well as other genres. One of the most easily recognizable elements is offbeat rhythms; staccato chords played by a guitar or piano (or both) on the offbeats of the measure. The tempo of reggae is usually slower than ska and rocksteady.[1] The concept of "call and response" can be found throughout reggae music. Reggae has spread to many countries across the world, often incorporating local instruments and fusing with other genres. Etymology[edit]

Busy Signal Glendale Goshia Gordon (born 24 January 1979), better known by his stage name Busy Signal, is a Jamaican dancehall reggae artist. Biography[edit] Gordon was born in Saint Ann Parish,[2] living in areas in West and East Kingston such as Tivoli Gardens, Papine, and Spanish Town. He was nicknamed Busy Signal by his friends because of the fact that he is constantly busy. The artist announced the introduction of a self-styled clothing line in 2011.[3] On 21 May 2012, Gordon was arrested at the Norman Manley International Airport in Jamaica due to an extradition warrant from the United States.[4] He was extradited to the US on 19 June where he faced cocaine-related charges.[5] In September 2012 he received a six month prison sentence.[6] He was released in November, and promptly released the single "Come Shock Out".[7][8] BBC Music ranked Reggae Music Again #7 on their Top 25 Albums of 2012 listing.[9] Discography[edit] Albums[edit] Singles[edit] Featured in References[edit] External links[edit]

Native American music Characteristics[edit] Singing and percussion are the most important aspects of traditional Native American music. Vocalization takes many forms, ranging from solo and choral song to responsorial, unison and multipart singing. Percussion, especially drums and rattles, are common accompaniment to keep the rhythm steady for the singers, who generally use their native language or non-lexical vocables (nonsense syllables). Traditional music usually begins with slow and steady beats that grow gradually faster and more emphatic, while various flourishes like drum and rattle tremolos, shouts and accented patterns add variety and signal changes in performance for singers and dancers.[1] Song texts and sources[edit] Native American song texts include both public pieces and secret songs, said to be "ancient and unchanging", which are used only for sacred and ceremonial purposes. Societal role[edit] The styles and purposes of music vary greatly between and among each Native American tribe.

The History of Salsa Music By Tijana Ilich Updated September 11, 2016. Salsa is a word that inspires an instant reaction in Latin music lovers everywhere. It is the rhythm, the dance, the musical excitement that sends millions of normally sedate non-Latinos to the dance floor where they meet their Latin neighbors, who are too busy enjoying the music to notice. Birthplace of Salsa There’s a lot of debate about the place where salsa was born. But there’s little doubt that if salsa had a passport, the date of birth would be the 1960s and stamped under place of birth would be New York, New York. Evolution of Salsa Between 1930 and 1960 there were musicians from Cuba, Puerto Rico, Mexico and South America coming to New York to perform. continue reading below our video They brought their own native rhythms and musical forms with them, but as they listened to each other and played music together, the musical influences mixed, fused and evolved. Of course, this musical hybridization was not a one-way street. The Name ‘Salsa’

Joseph Merrick Joseph Carey Merrick (5 August 1862 – 11 April 1890), sometimes incorrectly referred to as John Merrick, was an English man with severe deformities who was exhibited as a human curiosity named the Elephant Man. He became well known in London society after he went to live at the London Hospital. Merrick was born in Leicester, Leicestershire and began to develop abnormally during the first few years of his life. His skin appeared thick and lumpy, he developed an enlargement of his lips, and a bony lump grew on his forehead. In 1884, after four years in the workhouse, Merrick contacted a showman named Sam Torr and proposed that Torr should exhibit him. In Belgium, Merrick was robbed by his road manager and abandoned in Brussels. Merrick died on 11 April 1890, aged 27. The exact cause of Merrick's deformities is unclear. Early life and family[edit] Merrick photographed in 1889 Employment and the workhouse[edit] — "The Autobiography of Joseph Carey Merrick"[9] Merrick photographed in 1888

Native American music Native American music. The music of Native North Americans is primarily a vocal art, usually choral, although some nations favor solo singing. Native American music is entirely melodic; there is no harmony or polyphony, although there is occasional antiphonal singing between soloist and chorus. The melody is, in general, characterized by a descending melodic figure; its rhythm is irregular. There is no conception of absolute pitch and intonation can appear uncertain, the result of the distinctive method of voice production, involving muscular tension in the vocal apparatus and making possible frequent strong accents and glissandos. For the Native American, song is traditionally the chief means of communicating with the supernatural powers, and music is seldom performed for its own sake; definite results, such as the bringing of rain, success in battle, or the curing of the sick, are expected from music. See also North American Native art; Native American languages. See F.

Biography Héctor Juan Pérez Martínez (September 30, 1946 – June 29, 1993),[3] better known as Héctor Lavoe, was a Puerto Rican salsa singer.[4] Lavoe was born and raised in the Machuelo Abajo barrio of Ponce, Puerto Rico. Early in his life, he attended the Ponce Free School of Music known today as the Instituto de Música Juan Morel Campos,[5] and, inspired by Jesús Sánchez Erazo, developed an interest in music.[6] He moved to New York City on 3 May 1963, at the age of sixteen.[6] Shortly after his arrival, he worked as the singer in a sextet formed by Roberto García.[6] During this period, he performed with several other groups, including Orquesta New York, Kako All-Stars, and the Johnny Pacheco band. In 1967, Lavoe joined Willie Colón's band as its vocalist,[7] recording several hit songs, including "El Malo" and "Canto a Borinquen". Early life Héctor attended the local Juan Morel Campos Public School of Music where the first instrument he learned to play was the saxophone. Music Lavoe goes solo

Boom Boom Vibration - Jamaicansmusic.com It 's never happened to Alborosie acted as godfather and Italian produce a reggae band. This today and 'happened to Boom Boom Vibration: "The boom boom Vibration me struck by their simplicity ' and humility ', resemble the reggae humble, simple and deep at the same time. With them I have not had to spend unnecessary words, everything happened naturally through that mystical feeling which unites us under the same sound. Working with them reminded me of where I come from and where am I 'going ... Thanks boomboom "Alborosie The disc and 'NewRoots a concentrate of pure, down and the warmth of Jamaica crosses the speaker hi-fi and goes directly to the heart. A disc played and mixed in the studios of Kingston at the home of Alborosie, an album that speaks of Salento, which speaks of our actuality ', but that also makes us and allows us to fulfill a journey to lands and pristine Caribbean beaches.