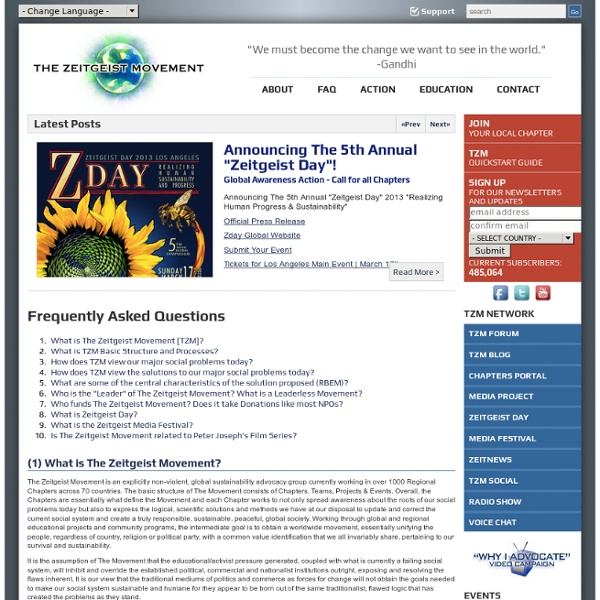 (1) What is The Zeitgeist Movement? The Zeitgeist Movement is an explicitly non-violent, global sustainability advocacy group currently working in over 1000 Regional Chapters across 70 countries. The basic structure of The Movement consists of Chapters, Teams, Projects & Events. Overall, the Chapters are essentially what define the Movement and each Chapter works to not only spread awareness about the roots of our social problems today but also to express the logical, scientific solutions and methods we have at our disposal to update and correct the current social system and create a truly responsible, sustainable, peaceful, global society. It is the assumption of The Movement that the educational/activist pressure generated, coupled with what is currently a failing social system, will inhibit and override the established political, commercial and nationalist institutions outright, exposing and resolving the flaws inherent. General Observations: Cyclical Consumption Infinite Growth "Teams"

Zeitgeist Information Dealing with the Overpopulation Myth To start off, as long as the market system is in place and profit is the main motivation to do anything, what I talk about won't happen (social entrepreneurs, fortunately, aren't profit-motivated, but that's a different discussion). However, assuming the infrastructure is in place to meet everyone's essential needs (food, water, shelter, healthcare) and essential luxuries (transportation, energy, education, communication), the population would cease to increase and may even begin to decrease [1] (nations with lower levels of poverty have fertility rates at or below replacement levels, while nations with greater levels of poverty have fertility rates well above replacement rates, strongly suggesting that guaranteeing everyone's basic needs would stop, or reverse, population growth). Furthermore, a report by the United Nations [2] predicts the global population rising to, at most, 10.6 billion by 2050 (a worst-case scenario, essentially). Education is easier.

"Who Are You Protecting?" Freedom of Speech, freedom of assembly, and freedom of the press. These legal rights, guaranteed to United States citizens by the first amendment, are essential to our free democracy. It has allowed for several national revolutions, such as movements for black and female suffrage, to change public opinion and national tradition. Protests have been at the heart of American democracy since its creation, but recent action by the NYPD and other local police departments around the nation have been infringing upon the protestors’ constitutional rights, arresting and brutalizing them with disregard to their grievances. Arrests related to Occupy Wall Street since it began on September 17th have reached 4,400 on November 17th, arresting more protestors in a two month period than the Iraqi government had arrested throughout the country’s uprising in 2009 (Quinnell). Members of credentialed press were also arrested during a police raid of the occupy camp in the early hours of November 15th.