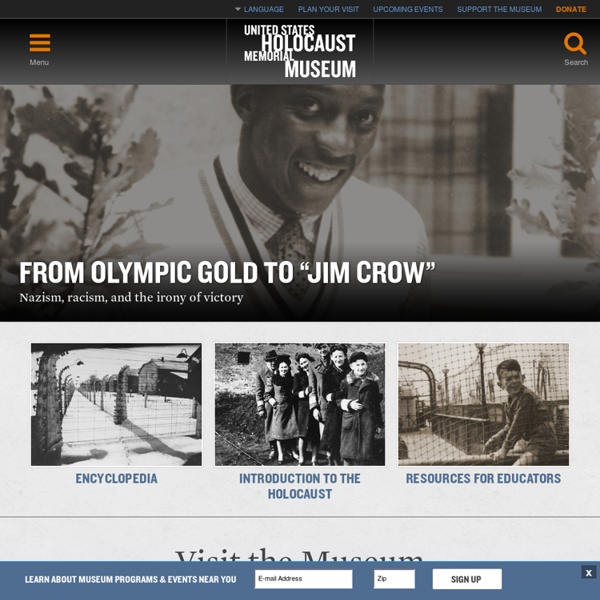 Berghuis v. Thompkins (08-1470) Appealed from the United States Court of Appeals for the Sixth Circuit (Nov. 19, 2008) Oral argument: March 1, 2010 In February of 2001, Southfield, Michigan police officers questioned Van Chester Thompkins (“Thompkins”) for roughly three hours about a shooting that had occurred over one year prior. Although Thompkins remained silent for much of the interrogation, he ultimately provided police with incriminating statements. In 2002, Thompkins was convicted of first-degree murder. In a habeas corpus proceeding pursuant to 28 U.S.C. § 2254, the Sixth Circuit reversed the conviction, finding that Thompkins had not waived his Miranda rights and that he had been unfairly prejudiced by ineffective counsel.

A PRIEST BEARS WITNESS Father Patrick Desbois is on a mission to uncover the mass graves of nearly two million Jews. Sixty years after the Holocaust, time is running out. by Sarah Breger Father Patrick Desbois seldom smiles. Sitting across from me in the deserted dining room of a Foggy Bottom hotel in Washington, DC, the austere French Catholic priest unflinchingly chronicles the mass execution of Jews during World War II.

20 percent projects: 10 must-have tools Students engaging in 20 percent projects must gather and curate information, share it and present it. Here are 10 tools to help. Every good handyman (or handywoman) knows that having the right tool can save minutes — or hours — of work. Academic work is no exception. Students who engage in 20 percent projects — where 20 percent of class time is devoted to a project the student is passionate about — engage in certain activities to prepare for the culminating event: often a presentation in front of their peers. There’s content gathering and content curation to be done. Zombie Hasbara: 'World War Z' and Hollywood’s Zionist embrace Zombies rush the wall in World War Z. I went to the Drive-In in Atlanta Friday night, to celebrate a friend’s birthday, a beautiful night under an almost full moon. We watched This is The End and Fast and Furious 6, and two of us stayed for the 2:00 am screening of World War Z. I’m not a zombie fanatic, so other than watching the Walking Dead, I had few expectations beyond the trailers that have been on TV since the Super Bowl. So I was surprised, jarred out of the movie really, when right in the middle of the narrative, Brad Pitt’s character, Gerry Lane, travels to Israel and spends more than 10 minutes in a full-on pro-Israel propaganda piece that was as corny as it was crazy.

World War II: The Holocaust - Alan Taylor - In Focus One of the most horrific terms in history was used by Nazi Germany to designate human beings whose lives were unimportant, or those who should be killed outright: Lebensunwertes Leben, or "life unworthy of life". The phrase was applied to the mentally impaired and later to the "racially inferior," or "sexually deviant," as well as to "enemies of the state" both internal and external. From very early in the war, part of Nazi policy was to murder civilians en masse, especially targeting Jews. Later in the war, this policy grew into Hitler's "final solution", the complete extermination of the Jews.

Security Studies Program (SSP) A Defense Concept for Ukraine This paper was written by Professor Barry R. Posen twenty years ago. It was never published in English. News Desk: A Reporter’s Lawyer My lawyer died last week. His name was Michael Nussbaum, of Washington, D.C. He was seventy-six years old and Stage 4 lung cancer got him after a brave two-year struggle. He was survived by his wife, Gloria Weissberg, and her two daughters. His obituary in the Washington Post told of his high-profile client list, about whom he rarely spoke, and his equally high-profile corporate clients, such as Lloyds of London. What’s harder to put into words is the relationship of a trusted lawyer and an investigative reporter. The Research Behind Choice and Inquiry-Based Education Updated: I’ve updated this post and page since publishing my most recent book about student choice. I’d love for you to add resources you’ve found in the comments section of this post so I can add them to the list! Since experimenting with “Genius Hour and 20% Time” in my class a few years ago, I’ve been fascinated by the research and history of this practice in education and the business world. This has led me down a long road to eventually writing Inquiry & Innovation in the Classroom (published by Routledge) on inquiry-driven education and choice-based learning experiences. During that time I’ve had hundreds of conversations with fellow teachers practicing choice-based and inquiry-driven learning in some way shape or form (Genius Hour, 20% Time, Passion Projects, Choose2Matter etc).

Diaries Anthologies « top » Adelson, Alan, and Robert Lapides, editors. Lodz Ghetto: Inside a Community under Siege. Cost of War to the United States About | Embed | Notes & Sources To embed the Cost of Military Action Against ISIS counter on your website, blog, etc, follow these simple instructions: 1) Add the following javascript to your page: Add the following code wherever you want the counter to show up: The forgotten history of Pearl Harbor In a straight line between the US and Japan, Hawaii is the first piece of land due west of San Francisco. In 1941 its shallow-water port, Pearl Harbor, provided the best place to anchor in the whole Pacific. There, at 7.49am (local time) on 7 December of that year, a first wave of torpedo bombers began to destroy the US Pacific Fleet. The Second World War revolved around not just Europe and the Atlantic, nor even the Pacific, but the whole of Asia.

These 20 Photographs Will Leave You Speechless. Especially The 11th One. There Are No Words. Take a look at these 20 powerful photos that will leave you speechless. Some of these photos are of truly historic moments, while others, are quite heartbreaking. World War II veteran from Belarus Konstantin Pronin, 86, sits on a bench as he waits for his comrades at Gorky park during Victory Day in Moscow, Russia, on Monday, May 9, 2011. Konstantin comes to this place every year.

Straighforward access to the Museum's archives, including photographs, transcripts of lectures, and the guidelines for teaching about the Holocaust. by nda_librarian May 5