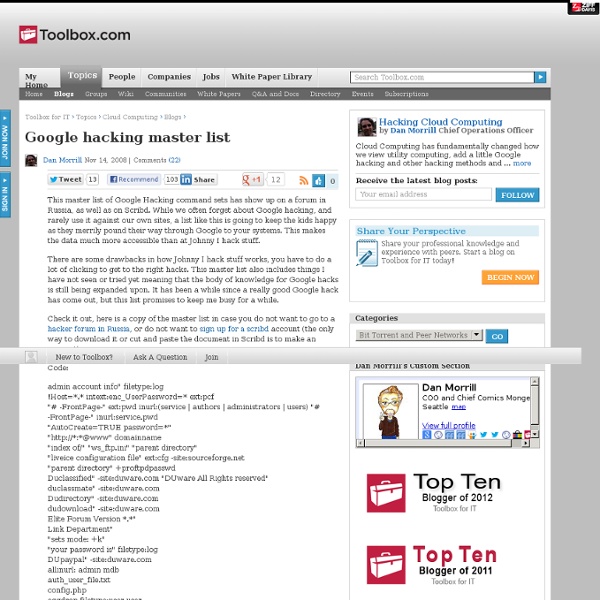 This master list of Google Hacking command sets has show up on a forum in Russia, as well as on Scribd. While we often forget about Google hacking, and rarely use it against our own sites, a list like this is going to keep the kids happy as they merrily pound their way through Google to your systems. This makes the data much more accessible than at Johnny I hack stuff. There are some drawbacks in how Johnny I hack stuff works, you have to do a lot of clicking to get to the right hacks. This master list also includes things I have not seen or tried yet meaning that the body of knowledge for Google hacks is still being expanded upon. It has been a while since a really good Google hack has come out, but this list promises to keep me busy for a while. Code: admin account info" filetype:log ! nurl:/admin/login.asp inurl:/cgi-bin/sqwebmail?

Google bomb A Google bomb on March 31st, 2013. Despite Google's intervention, some of the first search results still refer to Bush. The terms Google bomb and Googlewashing refer to the practice of causing a web page to rank highly in search engine results for unrelated or off-topic search terms by linking heavily. In contrast, search engine optimization (SEO) is the practice of improving the search engine listings of web pages for relevant search terms. It is done for either business, political, or comedic purposes (or some combination thereof).[1] Google's search-rank algorithm ranks pages higher for a particular search phrase if enough other pages linked to it use similar anchor text (linking text such as "miserable failure").

7 Clever Google Tricks Worth Knowing Email Below I have compiled a list of 7 clever Google tricks that I believe everyone should be aware of. Together I think they represent the apex of the grand possibilities associated with Google search manipulation tricks and hacks. 80+ Best Free Hacking Tutorials Learning to become hacker is not as easy as learning to become a software developer. I realized this when I started looking for learning resources for simple hacking people do. Even to start doing the simplest hack on own, a hacker requires to have in depth knowledge of multiple topics. Some people recommend minimum knowledge of few programming languages like C, Python, HTML with Unix operating system concepts and networking knowledge is required to start learning hacking techniques. Though knowing a lot of things is required, it is not really enough for you to be a competent and successful hacker. You must have a passion and positive attitude towards problem solving.

Heartbleed bug: Check which sites have been patched The Heartbleed bug is serious. Disclosed less than two days ago, the Heartbleed bug has sent sites and services across the Internet into patch mode. For an in-depth explanation of what exactly Heartbleed is, and what it does, read this post by our own Stephen Shankland. In essence, the bug potentially exposed your username and password on sites like Facebook, Google, Pinterest, and more. Using Alexa.com, we've been going through the list of the top 100 sites in the US, plus a few extras, and asking "Have you patched the Heartbleed bug yet?" REVEALED: Hundreds of words to avoid using online if you don't want the government spying on you Department of Homeland Security forced to release list following freedom of information requestAgency insists it only looks for evidence of genuine threats to the U.S. and not for signs of general dissent By Daniel Miller Published: 09:32 GMT, 26 May 2012 | Updated: 17:46 GMT, 26 May 2012

The 101 Most Useful Websites on the Internet Here are the most useful websites on the Internet that will make you smarter, increase productivity and help you learn new skills. These incredibly useful websites solve at least one problem really well. And they all have cool URLs that are easy to memorize thus saving you a trip to Google. Also see: The Best Android Apps Also see: The Best Mac Apps and Utilities 900-Year-Old Viking Message Solved! Photo by Jonas Nordby via forskning.no For the past several years researchers have been trying to crack a Viking rune alphabet known as Jötunvillur, a perplexing code dating back to the 11th or 12th century that’s been found in some 80 inscriptions including the scratched piece of wood found above. Recently runologist (!) Jonas Nordby from the University of Oslo managed to crack the code and discovered the secret message etched into this particular 900-year-old object reads “Kiss me.”

Completely Useless, Yet Interesting, Facts Collection This is a web site of all the useless facts, cool trivia, and interesting information that have been collected from various sources over the past few years. True to its name, most of the facts are useless, but many of them may actually help you in the future. Random Facts