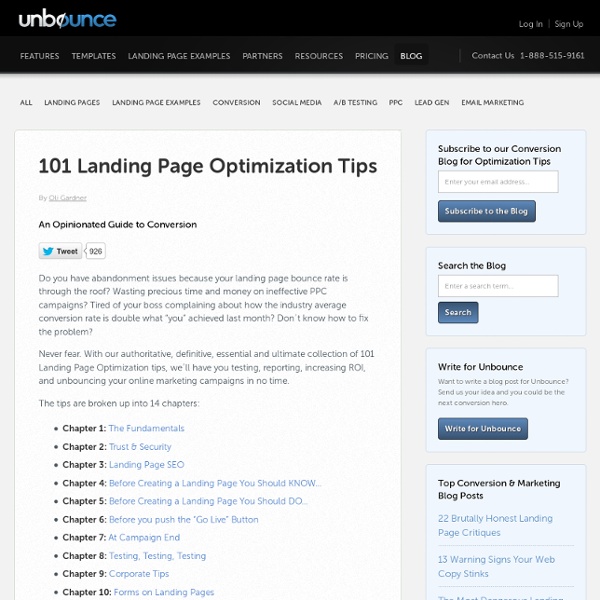 An Opinionated Guide to Conversion Do you have abandonment issues because your landing page bounce rate is through the roof? Wasting precious time and money on ineffective PPC campaigns? Never fear. The tips are broken up into 14 chapters: You can also download the original 101 Tips as a PDF. Chapter 1: The Fundamentals Sticking to the fundamentals can take you from having a terrible landing page to having one that people ﬁnd hard to poke holes in. Send people to a relevant and targeted pageYour homepage is a mish-mash of goal oriented communication – and usually for good reason. Chapter 2: Trust & Security With the proliferation of spam, pyramid and get-rich-quick schemes found in online marketing, becoming a leader with regard to trust can give your pages an instant leg up. Show a phone numberBy having a phone number present, it tells people you are legitimate and that there are real people at the end of the line. Chapter 3: Landing Page SEO

Why the marketing technology genie isn't going back into the IT bottle InformationWeek just published a guest article of mine, Why Marketing Should Run Its Own Technology. While I’ve been advocating greater technology leadership to marketers for a while, this is my first attempt to “reach across the aisle” and make my case directly to the IT community. Always up for a lively conversation, I don’t pull any punches, describing three structural differences in this new era of technology-driven marketing that I believe will limit IT’s ability to control it. Admittedly, in the seemingly zero-sum game of corporate budgets and power, ceding anything is rarely a popular opinion. But if IT can better understand the forces behind these changes, I hope it will inspire open discussion and fresh ideas for embracing the future. Because in the big picture, this isn’t a zero-sum game inside an organization — the real competition is in the marketplace. A recent report by the CMO Council and Accenture, surveying both CMO’s and CIO’s, reached two conclusions.

Landing Page Examples Collection [NEW] Looking for some design inspiration for your next landing page? We’ve just started a new landing page examples section in the Unbounce blog where we’re going to feature the best examples of landing pages that we find on our marketing travels. In each post we’ll break down the anatomy of the landing page and look at what’s good and where they could be improved. To kick things off here are 5 great examples of lead gen and click-through landing pages: Glow.com The thumbnail shown is only a small portion of what is a long landing page from cosmetics company Glow. View the full analysis We’ll be adding new landing page examples every week, and if you have one you’d like to submit for inclusion be sure to drop me a line at oli@unbounce.com.

Metadata – the New Language of Marketing October 28, 2010 Monday I talked about the social networking bubble. Marketers are getting sucked into the social-networking vortex and can’t find their way out. Business information is just getting started. Metadata is the new lingua-franca of business. Accurate metadata is the new currency of marketing. Markets are conversations. Personal data will shift the power balance in the conversations. Example: media. Example: authentication and authorization. Interruption advertising will have to change. Brands will never recover. The Open Web will overtake today’s silo-based social web, giving people the ability to manage relationships and data from anywhere, any time, using any device, without relying on a single company or web site. Your industry needs your help, and you can’t afford to ignore it any longer. SEO will still be valuable, and it will keep evolving. What I’m describing are the arms, legs, trunk, and ears of the pull elephant.

Landing Page Optimization tips: analysis of 50+ sites to find out what increases sales and conversions Last week I offered free conversion rate optimization advice on a popular forum (known as Hacker News). Within a single day I got 50+ requests for help. It was definitely an enriching experience analyzing and dissecting all those websites and landing pages. As I was replying and providing my feedback to those 50+ sites, I started sensing a few common issues that affected conversion rates of all those pages. Without naming any specific URL or site, in this post I will detail where those sites lacked and what you can learn from my analysis to fix your homepage or landing page. Four common issues with landing pages According to my analysis, one of these four issues (if not all) were the most common causes of poor conversion rates. Let’s analyze the issues one by one. Issue #1: Too much text Example of a homepage with too much text Example of a balanced webpage (text + images) So, what you need is a proper balance between graphics and text. Issue #2: Lack of descriptive headline Conclusion Tags

Your Landing Page Sucks! Here are 10 Examples That Don’t… Don’t take that too personally, I’ve not actually seen your landing page yet. Rather, I’m going to cling to the assumption that it sucks simply because most of them do. Sad, but horribly true. Note: I’m bringing this post back from the archives. A) because it’s timeless, B) because it’s awesome and C) as a teaser to an upcoming landing page examples post. This is 10 teeny tiny thumbnails of the soon to be heretofore thought of as the greatest landing pages ever seen on November 23rd, 2010. A real-world style landing experience Imagine walking into a restaurant, and finding that the decor is gross, the music is too loud, the staff look sketchy, the menu has 400 options on it, they have an award on the wall for “Best meatloaf in Idaho, 1995″ and to top it all off, the place is empty. Excuse me waiter, could I just get the back button please? Soooooooo, today we’re going to take a trip down to the Top-Notch Landing Page Store and see if we can rustle up something to inspire your next design.

joliprint : Turn any webpage into a readable PDF Thank You Pages ​| Landing Page Conversion Course | #LPOcourse In Part 8 of our course, we’re going to take a look at what happens after the conversion – confirmation or thank you pages. Your marketing doesn’t end with a conversion. Where there is intent there is opportunity. What is post-conversion marketing?Why is it important?Lead gen confirmation pagesEcommerce click-through confirmation pages 1. Post-conversion marketing is the process of continuing the conversation with your new lead on a confirmation page. 2. Confirmation pages are an underutilized place to get more from your lead/customer. So what can you put on your confirmation page to further your relationship? 3. How you market to your leads after the initial conversion depends largely on what they have just done, and it’s very important to keep the next step as contextually relevant as possible. Here are some examples of post-conversion tactics you can use to leverage your new leads: 4. Ask your newly converted customers to: Remember to follow along with a free Unbounce landing page account

Creative Google Maps Manipulations by Christoph Niemann | Tech V By Ryan Deal posted April 15, 2010, 9:28 pm | Maps are boring but they get you places… most of the time. Well, that is until now. New York Times illustrator Christoph Niemann has created a series of Google Map Manipulations that are clever, unique, and darn creative. Here’s a bunch of our favorites which are also available as prints. Enjoy! Landing Page Optimization ​| Landing Page Conversion Course​ | #LPOcourse Today we’re going to dig into the most fun, most satisfying part of course – testing! Believe me, after you’ve run your first successful test you’ll be hooked. Every day that you don’t have a test running is an opportunity missed. The landing page optimization process consistes of 6 steps: Define your goals and success metricsBuild your first landing pageDrive traffic to your pageGather insight into page performanceCreate a test hypothesisA/B test your hypothesis Having a process for Landing Page Optimization (LPO) is the difference between making informed testing choices vs. coming up with random ideas. The diagram below shows the 6 steps of the LPO process, which includes the preparation stages where you set goals, build your page and start driving traffic to your page. 1. Conversion expert Peep Laja from ConversionXL.com recommends a 4-pronged strategy for defining your goals and success metrics: Step 1: Define your business objectives Step 2: Define your landing page goals 2. 3. 4. 5. 6.

Loper OS » Non-Apple’s Mistake I’ve been patient, I’ve been gracious And this mountain is covered with wolves Hear them howling, my hungry children Maybe you should stay and have another drink and think about me and you.Jonathan Coulton, “Skullcrusher Mountain” The howls of protest coming from iPhone and iPad developers are loud and shrill, and are sure to grow louder and shriller as their Golden Cage grows smaller and smaller, as I’m certain it will. The Golden Cage is indeed a cage, and a strong one. It appears that no one (not PG, either) has a grasp of the real problem behind Apple’s tyranny. I argue that Apple now has not one but two monopolies: I) A nearly-total monopoly on computer (and pocket computer) systems designed with good taste. Mr. Imagine that every car maker save for Toyota insisted on using the infamous East German Trabant as a standard of quality – yet blindly imitated random elements of Toyota’s visual design. You want a non-tyrannical Apple? Edit: [3] What else would you call this?

SaveIE6: Help us save the best browser around Ousted Kyrgyz president quits, leaves country Ex-Kyrgyz leader unhurt in clashes Ousted Kyrgyz president Kurmanbek Bakiev arrives in KazakhstanInterim government claims Bakiev has resignedProtesters took over the main government offices in the capital last weekBakiev's departure follows days of rallies by opponents and supporters Bishkek, Kyrgyzstan (CNN) -- Ousted Kyrgyz President Kurmanbek Bakiev left the country and resigned Thursday after negotiations among the government, the president, and international states and agencies. The Kazakh Foreign Ministry said a plane carrying Bakiev had landed in Taraz, a town in bordering Kazakhstan. An official in the interim Kyrgyz government, Edil Basilyev, a senior adviser to interim government chairwoman Roza Otunbayeva, said Bakiev had resigned. Kanat Saudabayev, Kazakhstan's secretary of state and foreign minister, said in a statement an agreement was reached with the interim government of Kyrgyzstan and Bakiev for the president's departure. "Mr. Video: Back to normal in Kyrgyzstan

The recession and the Web design industry Apr 15 2010 By Andy Warpole In the autumn of 2008, at least for a few weeks, it looked as if the very walls of capitalism were going to fall on to the heads of its participants. There was panic on Wall Street, in the City of London, Berlin, Paris and most major financial centres as stocks crashed and the politicians spent billions of taxpayers money to prop up the banks. As the vocal billionaire commentator George Soros stated: “This is a crisis unlike any other. 18 months later and the dark prophesies of a repeat of the 1930s have not materialised. Within the Western economies different sectors have faired better than others. Image by albertlaw The dot com crash For those that have been involved in the industry since its inception then this is the second time they have experienced a recession – the first being 10 years ago. In the late 90s both investors and the technology sector rubbed off each other in an orgasm of expectation. And the management were completely out of their depth.