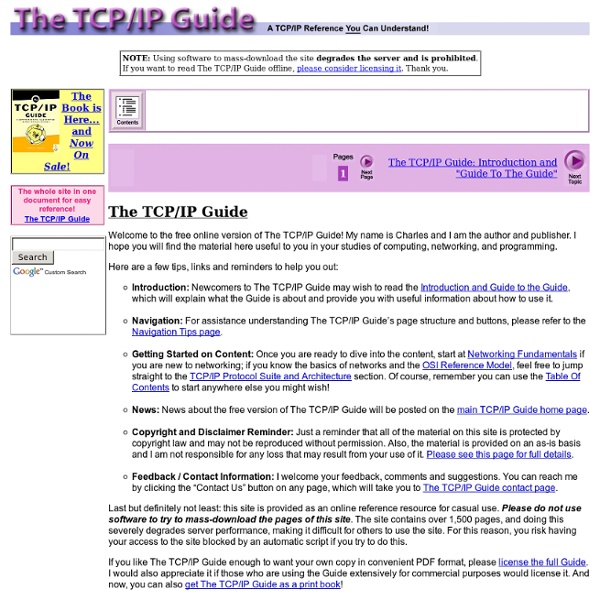 The TCP/IP Guide Welcome to the free online version of The TCP/IP Guide! My name is Charles and I am the author and publisher. I hope you will find the material here useful to you in your studies of computing, networking, and programming. Here are a few tips, links and reminders to help you out: Introduction: Newcomers to The TCP/IP Guide may wish to read the Introduction and Guide to the Guide, which will explain what the Guide is about and provide you with useful information about how to use it. Last but definitely not least: this site is provided as an online reference resource for casual use. If you like The TCP/IP Guide enough to want your own copy in convenient PDF format, please license the full Guide. Thanks again and enjoy the site! Charles Home - Table Of Contents - Contact Us Related:  Network/Security

Probably the Best Free Security List in the World Security List Index Select a Security Category: All Items Keys Discontinued or not updated recently (for at least three years). If there are both free and paid versions, this key applies only to the free version. Item links to a Gizmo's Freeware 'Best Free' page. Item or this icon links to a Gizmo's Freeware page. Web application. Browsers: FF = Firefox; Ch = Chrome; IE = Internet Explorer; OB = Other browsers; AB = All browsers. About This list (earlier "Probably the Best Free Security List in the World") contains thousands of links to free security-related Windows desktop applications and web applications, with the goal of listing everything available that's not malicious or of low usefulness. Use the Windows desktop applications or web applications on this list at your discretion. We periodically check all links on this list with Web of Trust. Use the comments section below, or this (or this) forum thread, to let us know about issues, or suggestions for items that could be added to the list.

Troubleshooting VPNs Troubleshooting VPNs By Mark Lewis More Information VPNs are complex, so when things go wrong, they can be difficult to troubleshoot. Table of Contents the trusted technology learning source  View Your Cart Account Sign In © 2014 Pearson Education, Informit. TCP Operational Overview and the TCP Finite State Machine (FSM) TCP Operational Overview and the TCP Finite State Machine (FSM)(Page 2 of 3) The Simplified TCP Finite State Machine In the case of TCP, the finite state machine can be considered to describe the “life stages” of a connection. Each connection between one TCP device and another begins in a null state where there is no connection, and then proceeds through a series of states until a connection is established. The full description of the states, events and transitions in a TCP connection is lengthy and complicated—not surprising, since that would cover much of the entire TCP standard. Table 151 briefly describes each of the TCP states in a TCP connection, and also describes the main events that occur in each state, and what actions and transitions occur as a result. SYN: A synchronize message, used to initiate and establish a connection. Again, I have not shown every possible transition, just the ones normally followed in the life of a connection. Tap tap… still awake?

v3n0m-Scanner/Linux-v3n0m · GitHub - Vimperator Secure Your Wireless Router In The Short Term By Assigning It An Aggressive Name As more devices ship with wireless networking capabilities, it becomes increasingly important to have routers that are capable of handling connections from hardware such as tablets, laptops and mobile phones. The problem is that many routers still in use are perfectly good pieces of hardware, except for one drawback – they don’t support Wireless-N or offer advanced encryption such as WPA. With the threat of drive-by Wi-Fi theft and the risk of secure data being transferred over a non-secure connection, wireless routers without the most current security options can be temporarily shored up with just a bit of imagination. Secure Your Wireless Router with Its Name According to figures published in October 2011, Windows XP still has a respectable market share as the operating system on around 33% of all computers connected to the web. In order for users to connect to a wireless network, a wireless router typically broadcasts an SSID, or Service Set Identifier. Conclusion

IPv6 Autoconfiguration - The Internet Protocol Journal - Volume 7, Number 2 Since 1993 the Dynamic Host Configuration Protocol (DHCP) [1] has allowed systems to obtain an IPv4 address as well as other information such as the default router or Domain Name System (DNS) server. A similar protocol called DHCPv6 [2] has been published for IPv6, the next version of the IP protocol. However, IPv6 also has a stateless autoconfiguration protocol [3], which has no equivalent in IPv4. DHCP and DHCPv6 are known as stateful protocols because they maintain tables within dedicated servers. However, the stateless autoconfiguration protocol does not need any server or relay because there is no state to maintain. This article explains the IPv6 stateless autoconfiguration mechanism and depicts its different phases. Every IPv6 system (other than routers) is able to build its own unicast global address. Address types have well-defined destination scopes: global, site-local and link-local. At minimum, a NIC is associated with a single link-local address.

Learn Code The Hard Way -- Books And Courses To Learn To Code Damn Vulnerable Web App TCP/IP Overview and History TCP/IP Overview and History(Page 1 of 3) The best place to start looking at TCP/IP is probably the name itself. TCP/IP in fact consists of dozens of different protocols, but only a few are the “main” protocols that define the core operation of the suite. Of these key protocols, two are usually considered the most important. The Internet Protocol (IP) is the primary OSI network layer (layer three) protocol that provides addressing, datagram routing and other functions in an internetwork. Due to the importance of these two protocols, their abbreviations have come to represent the entire suite: “TCP/IP”. TCP/IP uses its own four-layer architecture that corresponds roughly to the OSI Reference Model and provides a framework for the various protocols that comprise the suite. As I said earlier, the Internet is a primary reason why TCP/IP is what it is today. In 1973, development of a full-fledged system of internetworking protocols for the ARPAnet began. Home - Table Of Contents - Contact Us