History of Wentworth Institute of Technology 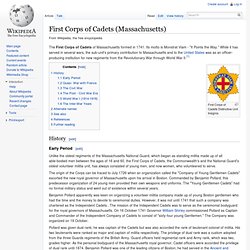 Its motto is Monstrat Viam - "It Points the Way. " While it has served in several wars, the sub-unit's primary contribution to Massachusetts and to the United States was as an officer-producing institution for new regiments from the Revolutionary War through World War II.[1] First Corps of Cadets Distinctive Unit Insignia Unlike the oldest regiments of the Massachusetts National Guard, which began as standing militia made up of all able-bodied men between the ages of 16 and 60, the First Corps of Cadets, the Commonwealth's and the National Guard's oldest volunteer militia unit, has always consisted of young men, and now women, who volunteered to serve.

The origin of the Corps can be traced to July 1726 when an organization called the "Company of Young Gentlemen Cadets" escorted the new royal governor of Massachusetts upon his arrival in Boston. The Cadets escorted the governor at parades and ceremonies. Wentworth Institute of Technology. History[edit] Wentworth Hall On September 25, 1911, Wentworth opened its doors as a technical school to 242 students. 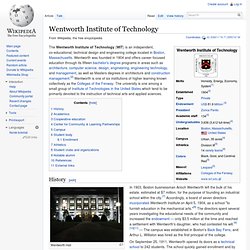 The school quickly gained enrollment and by 1919, it had 1,800 students in day and evening programs and 45 teachers.[12] In 1953, Wentworth named its first president, H. Russell Beatty. Wentworth became a degree-granting institution in 1957 and began awarding its first baccalaureate-level degrees in 1970. In 1972, the Institute admitted its first female students. Major renovations to the third floor of Annex Hall were enacted in 1989 at a cost of $1 million to add architectural studios and facilities. In 2001 and 2005 Wentworth opened new residence halls with 473 and 360 beds respectively, ending Wentworth's status as a majority commuter school. On June 8, 2005, Zorica Pantic was announced as Wentworth's fourth president. Academics[edit] Leopard History and Tradition - Athletics.

A special thanks to Joe Clifford and Rob Zagarella, formerly of Wentworth's Publications Office, for providing a lot of the resources (especially from the “early” years) for this piece. 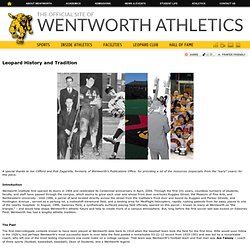 Introduction Wentworth Institute first opened its doors in 1904 and celebrated its Centennial anniversary in April, 2004. Through the first 101 years, countless numbers of students, faculty, and staff have passed through the campus, which seems to grow each year and whose front door overlooks Ruggles Street, the Museum of Fine Arts, and Northeastern University . Until 1996, a parcel of land located directly across the street from the Institute's front door and bound by Ruggles and Parker Streets, and Huntington Avenue , served as a parking lot, a makeshift intramural field, and a landing area for MedFlight helicopters, rapidly rushing patients from far away places to one of the nearby hospitals.

History of WIT. South Huntington Ave. during this 1985.