Without a Trace: Turn Your Flash Drive into a Portable Privacy Toolkit 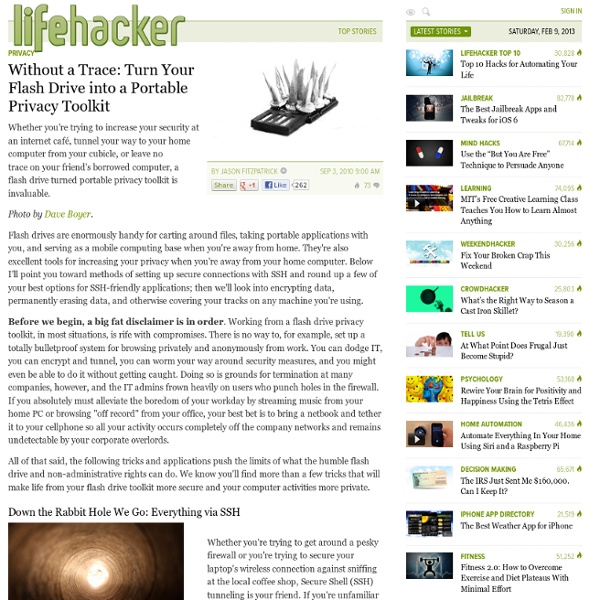 @parabellum2000: Here, Here! While I might get frustrated from time to time with the limitations of web access at my school (I have to download a YouTube video from home and bring it in if I want to use it in a lesson), I understand why they exist and, frankly, I work too hard and too much to have time to putz around with tunneling through the firewall. Not to mention that I like my job, I like the IT guys, and they know I know what I'm doing. I wouldn't be surprised, if a student set up a SSH tunnel on a library computer, if they came to me to ask if I knew anything about it. Even when I worked behind a desk entering orders all day, there were ways to make it more interesting, and I was able to keep myself busy adding value for the company. You want to play your own music in your office? @tchrman35: A CD Player?

4 portable app suites to power up your USB flash drive Portable applications suites are a great way to get your hands on a ton of useful software with minimal fuss. Got a new flash drive, or maybe an old one you don't know what to do with? Throw one of these suites on it and you've got an instant software Swiss Army Knife. PortableApps.com - John T. Haller's project is the most well-known suite on the 'net. It includes Firefox, OpenOffice (or AbiWord in the light version), Pidgin, Thunderbird, Sunbird, Sumatra PDF, KeePass, and more. LiberKey - The Ultimate version will take up half a gig on your drive, and it's packed with useful programs, including technician favorites like CPU-Z, RegShot, Revo Uninstaller, Unlocker. Lupo PenSuite - In addition to a giant list of portable applications, Lupo also includes links to popular web-based apps like Flickr, G.ho.st, PixIr, RTM, Virustotal, and Zoho. WinPenPack - WinPenPack offers five different versions. Tags: freeware, liberkey, opensource, portable-apps, portableapps, suites, winpenpack

32 Useful Portable Apps For Web Designers and Developers We like portable apps because those applications are lightweight and require no installation to run. As a web designer/developer, i used to work with different PCs. Rather than carrying my laptop everywhere, i prefer saving frequently used applications into my USB drive. I had collect a lot of useful portable applications and i would like to share those applications with my readers. Let’s look into these applications now: Browsers 1. Firefox is a popular web browsers and portableapps.com had created the portable version of this application. 2. Google Chrome is quite popular browser and it has advantages over other browsers. 3. Probably you want to try out your design in different browsers. Text Editors 4. Notepad++ is one of the most popular notepad replacement for Windows. 5. Web Design Toy is a simple application that will splits into two views where you can instantly preview the output when you type he HTML code. 6. Oiko is a visual editor for CSS. 7. Image Editors 8. 9. 10. 11. 12. 13.

Turn Your Spare Thumb Drives Into Feature-Packed Giveaway Drives - Portable Applications 45 Free Useful Thumb Drive Applications | Tools Thumb drives were once used to store files and make data portable, but due to the rapid increase in storage capacity over the pass few years these gadgets now have a bigger role. Some even run the entire operating system on a thumb drive. The more we rely on thumb drives, the more demands we have in terms of tools and applications to facilitate the transfer and security of files. Synchronization And Backup Microsoft USB Flash Drive Manager – Backup and Restore USB Thumb Drive Data Microsoft USB Flash Drive Manager allows you to backup and restore presentation, pictures, songs and applications from and to USB Flash Drive devices and take them with you. xPortClone – Backup Removable Devices xPortClone is a simple but effective tool that allows you to backup files from a removable device to your hard drive. Toucan – Sync, Backup & Secure Toucan is a small utility allowing you to synchronize, backup and secure your data with more options than the built in suite utilities. Recovery Tools PStart