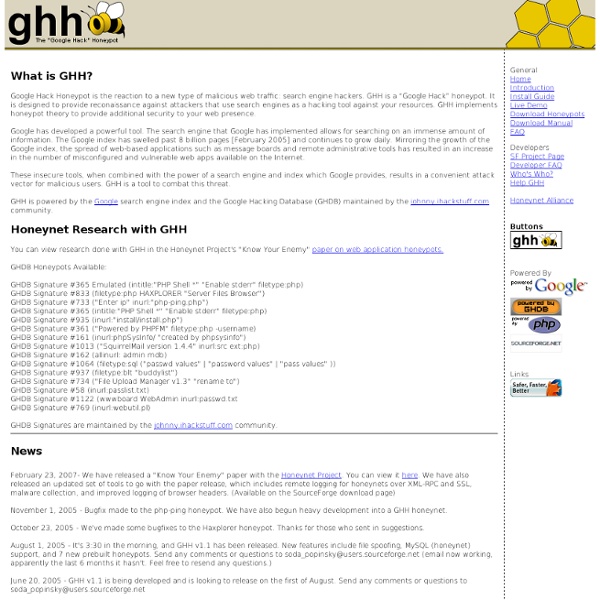 What is GHH? Google Hack Honeypot is the reaction to a new type of malicious web traffic: search engine hackers. GHH is a “Google Hack” honeypot. It is designed to provide reconaissance against attackers that use search engines as a hacking tool against your resources. GHH implements honeypot theory to provide additional security to your web presence. Google has developed a powerful tool.

Top of the Web Follow Springo on : Find top sites My top sites Top Sites ! Google Ultimate Interface About Google In 1996-1997, Larry Page and Sergey Brin came up with an algorithm to rank web pages, called PageRank. Realizing the potential to improve search engines, they tried and failed to sell the technology to any. So they founded Google, which in an incredibly short period of time has become one of the world’s most powerful companies. While primarily known as a search engine, Google now makes a wide variety of web-based and other software and is known for investing in wide-ranging projects outside their core such as through their philanthropic arm, Google.org.

How To Use Google For Hacking Google serves almost 80 percent of all search queries on the Internet, proving itself as the most popular search engine. However Google makes it possible to reach not only the publicly available information resources, but also gives access to some of the most confidential information that should never have been revealed. In this post I will show how to use Google for exploiting security vulnerabilities within websites. The following are some of the hacks that can be accomplished using Google. 1. Hacking Security Cameras How-To Find Files In Unprotected Directories We’ve all got a little voyeurism in us. That’s a big reason why the post, Clearing Google Search History to Maintain Your Privacy sent my visitor counts off the charts :). In this article, I’m going to show you how to create search queries that will list the contents of unprotected directories on the internet. You’ll be able to play the music files, watch the videos, look at photos and more. I have to say, it’s really addicting.

Google hacking master list This master list of Google Hacking command sets has show up on a forum in Russia, as well as on Scribd. While we often forget about Google hacking, and rarely use it against our own sites, a list like this is going to keep the kids happy as they merrily pound their way through Google to your systems. This makes the data much more accessible than at Johnny I hack stuff. There are some drawbacks in how Johnny I hack stuff works, you have to do a lot of clicking to get to the right hacks. This master list also includes things I have not seen or tried yet meaning that the body of knowledge for Google hacks is still being expanded upon.

how to be creative Accept that you’ve got the creative urge and it’s never going to go away. Make friends with it. Drink some tequila if you need to. How To Search On Google Like Elite Hackers Google is best search engine in the world. Actually people think that Google's popularity is because of its simple and fast searching interface but friends, its more popular because it has rich operators and query support that will make your searching experience even better. Most of us doesn't know which operators are supported by Google and if they know some of them, they doesn't know how actually these operators work and enrich our searching practice. Today, i will tell you How we can search on Google like elite hackers or simply say computer experts do. But for this its necessary that you should know and understand all the Google operators properly. So lets learn how we can enrich our searching experience in Google.

Google Search Operators - Search Help You can use symbols or words in your search to make your search results more precise. Google Search usually ignores punctuation that isn’t part of a search operator. Don’t put spaces between the symbol or word and your search term. The 50 podcasts you need to hear Alice Isn’t Dead The creepy podcast from the Welcome To Night Vale gang The makers of the gloriously weird Welcome To Night Vale are behind this eerie podcast. Why Americans Are the Weirdest People in the World IN THE SUMMER of 1995, a young graduate student in anthropology at UCLA named Joe Henrich traveled to Peru to carry out some fieldwork among the Machiguenga, an indigenous people who live north of Machu Picchu in the Amazon basin. The Machiguenga had traditionally been horticulturalists who lived in single-family, thatch-roofed houses in small hamlets composed of clusters of extended families. For sustenance, they relied on local game and produce from small-scale farming.

Google Hacking Database, GHDB, Google Dorks We call them 'googledorks': Inept or foolish people as revealed by Google. Whatever you call these fools, you've found the center of the Google Hacking Universe! Latest Google Hacking Entries Google Hacking Database Categories Footholds (31) Gmail Toolbox: 60+ Tools For Gmail With Google announcing the ability to increase your Gmail storage capacity this week, we decided to delve into other ways to extend and enhance Google's popular webmail service. Presenting: 60+ tools and resources for Gmail. Desktop Applications GCount - An application for Mac OSX that alerts you to new mail. gDisk - An app for Mac OSX giving the ability to turn Gmail accounts into storage drives. gFeeder - A small ticker for your Gmail that will let you know at a glance what's coming in for you.