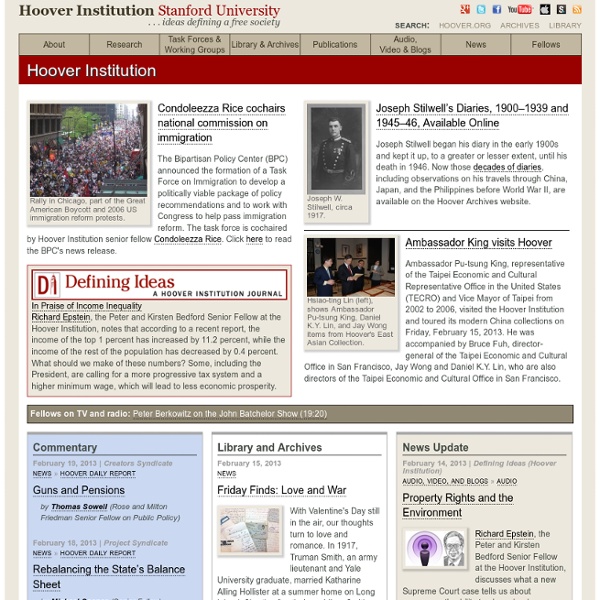 Opening | Techonomy Speaker Excerpts We think there’s a hole in the dialogue about progress. The role of technology as a tool is underappreciated. We do believe that revolutions are underway. That’s why we call this Revolutions in Progress and we consider ourselves revolutionaries; revolutionaries fighting for a new way of thinking about businesses and organizations and society that is based more around the idea of technology’s power to transform efficiency, equity, and inclusiveness in the world today. There’s a fear now that resources cannot match needs.

Poland The Polish collection is by far the richest and most comprehensive of the Hoover Institution's East European collections. It is also the largest and the most important research collection on twentieth-century Poland outside Poland itself. There is in-depth coverage of Efforts for the restoration of Poland's independence during the period immediately following World War I, 1914–21. The Wlodzimierz Wiskowski papers, the Polish subject collection, and the recently acquired Janusz Cisek collection include large numbers of leaflets, proclamations, and posters, more than 3,000 items in all, issued by groups representing virtually the entire political spectrum in Poland in the war years.Poland during World War II, including the archives of the Polish government in exile and most of its agencies, with extensive records on the deportation of Polish citizens and on Poland's military efforts during the war.

The Smart List 2012: 50 people who will change the world Welcome to the first Wired Smart List. We set out to discover the people who are going to make an impact on our future --by asking today's top achievers who, emerging in their field, they'd most like to have a leisurely lunch or dinner with. So we approached some of the world's brightest minds -- from Melinda Gates to Ai Weiwei -- to nominate one fresh, exciting thinker who is influencing them, someone whose ideas or experience they feel are transformative. Some suggested names you may be aware of, others might be new. Richard Branson -- entrepreneur selects Lesego Malatsi -- designer Lesego Malatsi has a business called Mzansi Designers Emporium, based in Johannesburg. Niklas Zennström -- founder, Atomico; cofounder, Kazaa and Skype selects Markus Alexej Persson aka Notch -- creator, Minecraft Notch saw a chance to create computer games in a different way, and executed it brilliantly.

Dinesh D'Souza D'Souza is the author of several New York Times best-selling books,[6] and has written the Christian apologetics What's So Great About Christianity and Life After Death: The Evidence. D'Souza is also a notable critic of New Atheism.[7][8][9][10] In 2012, D'Souza released 2016: Obama's America, a film based on his 2010 book The Roots of Obama's Rage, both of which posit that Barack Obama's attitude toward America derives from his father's anti-colonialism and from a psychological desire to fulfill his father's dream of diminishing the power of Western imperial states. The film has been the highest grossing conservative political film produced in the United States.[11] In January 2014, he was indicted on charges of making illegal political contributions to a 2012 US Senate campaign.[12] Four Republicans on the Senate Judiciary Committee then sent a letter to FBI Director James Comey concerned that D'Souza might have been the victim of selective prosecution.[13] Life and career[edit]

Mona Eltahawy Ann Coulter Coulter rose to prominence in the 1990s as an outspoken critic of the Clinton administration. Well known for her unapologetic conservative political opinions and the controversial ways in which she presents and defends them, Coulter has described herself as a polemicist who likes to "stir up the pot", and does not "pretend to be impartial or balanced, as broadcasters do",[2] sometimes drawing criticism from the right, as well as the left. She has written eight books, which have sold over 3 million copies.[3] The first book concerned the Bill Clinton impeachment, and sprang from her experience writing legal briefs for Paula Jones's attorneys plus columns she wrote about the case.[4][5] At the same time, Coulter's syndicated column for Universal Press Syndicate began appearing in newspapers, and was featured on major conservative websites. Early life Career Coulter's career is highlighted by the publication of ten books, as well as the weekly syndicated newspaper column that she publishes.

Big History at Macquarie - Macquarie University What is Big History Big History is the attempt to understand, in a unified and interdisciplinary way, the history of the Cosmos, Earth, Life and Humanity. Big History is ambitious - it seeks understanding by bringing together and linking the knowledge available in many different scholarly disciplines. Alexander von Humboldt sought a synthesis of nature and history more than 150 years ago, but was restricted by the limitations of scientific knowledge in his time. Big History offers us the possibility to understand our universe, our world, and our humanity in a new way. Van Gogh's Starry Night Over the Rhone... Van Gogh's' Starry Night Over the Rhone was painted in Arles, in September 1888. This sense is experienced by astronauts in the 'overview effect' - as they see planet earth from space. View this beautiful short film to share the thoughts of Apollo astronauts about their experience of travelling into space - and their resulting cognitive shift in understanding their home planet earth.

Frank Wilczek Frank Anthony Wilczek (born May 15, 1951) is an American theoretical physicist, mathematician and a Nobel laureate.[2] He is currently the Herman Feshbach Professor of Physics at the Massachusetts Institute of Technology (MIT).[3] Professor Wilczek, along with Professor David Gross and H. David Politzer, was awarded the Nobel Prize in Physics in 2004 for their discovery of asymptotic freedom in the theory of the strong interaction.[4] Biography[edit] He received his Bachelor of Science in Mathematics at the University of Chicago in 1970, a Master of Arts in Mathematics at Princeton University, 1972, and a Ph.D. in physics at Princeton University in 1974. He was awarded the Lorentz Medal in 2002. He currently serves on the board for Society for Science & the Public. Wilczek was married to Betsy Devine on July 3, 1973, and together have two daughters, Amity (Herb Reich Natural Science Chair at Deep Springs College) and Mira. Wilczek is an agnostic.[6] Research[edit] Current research 2008. 1988.