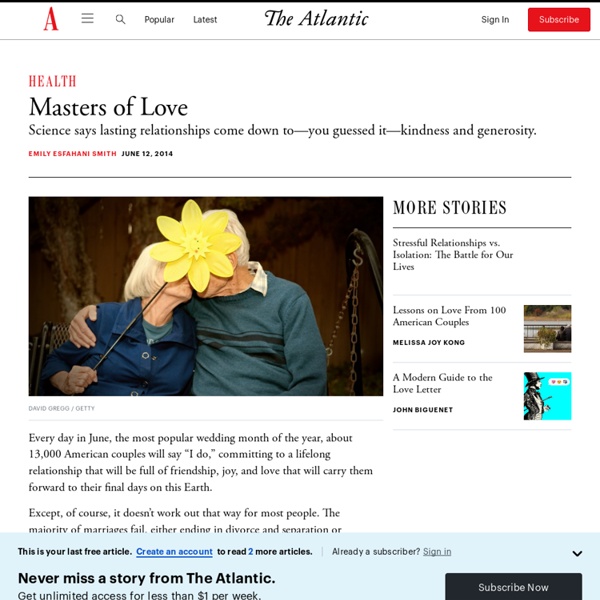 Gottman wanted to know more about how the masters created that culture of love and intimacy, and how the disasters squashed it. In a follow-up study in 1990, he designed a lab on the University of Washington campus to look like a beautiful bed-and-breakfast retreat. He invited 130 newlywed couples to spend the day at this retreat and watched them as they did what couples normally do on vacation: cook, clean, listen to music, eat, chat, and hang out. And Gottman made a crucial discovery in this study—one that gets at the heart of why some relationships thrive while others languish. Throughout the day, partners would make requests for connection, what Gottman calls “bids.” For example, say that the husband is a bird enthusiast and notices a goldfinch fly across the yard. The wife now has a choice. People who turned toward their partners in the study responded by engaging the bidder, showing interest and support in the bid.

Afraid of Love: 2 Fears That Keep People Single Could you possibly be afraid of falling in love? Watch out for these telltale signs, and finally free yourself to attract a genuine, loving relationship. Fear is a funny thing. When you’re in a scary situation—say you’re confronted by a bear—it’s easy to know what you’re feeling. You’re afraid. And you know that what’s causing the fear is a very definite threat to your physical well being. With 10 Short Words, Stephen Colbert Just Taught an Extraordinary Lesson About Life, Happiness, and Gratitude Life is beautiful. Life is hard. Even the most successful people endure pain. Even the happiest and best-adjusted sometimes feel sorry for themselves. Ordering The Vegetarian Meal? There’s More Animal Blood On Your Hands Please note: the author of this article is Australian, and much of the information in the following article applies specifically to that area of the world. Farming practises differ around the globe. The ethics of eating red meat have been grilled recently by critics who question its consequences for environmental health and animal welfare. But if you want to minimise animal suffering and promote more sustainable agriculture, adopting a vegetarian diet might be the worst possible thing you could do.

Love is Not Enough In 1967, John Lennon wrote a song called, “All You Need is Love.” He also beat both of his wives, abandoned one of his children, verbally abused his gay Jewish manager with homophobic and anti-semitic slurs, and once had a camera crew film him lying naked in his bed for an entire day. Thirty-five years later, Trent Reznor from Nine Inch Nails wrote a song called “Love is Not Enough.” Reznor, despite being famous for his shocking stage performances and his grotesque and disturbing videos, abstained from all drugs and alcohol, married one woman, had two children with her, and then cancelled entire albums and tours so that he could stay home and be a good husband and father.

Money Makes You Less Rational Than You Think Kinja is in read-only mode. We are working to restore service. Two year ago, Berkeley researchers showed that people who drive expensive vehicles are four times more likely to cut off drivers of lower status vehicles. The researchers concluded that higher social class can predict increased unethical behavior. This supports my theory that Lexus drivers are the worst. if I get cut off, its almost always by a Lexus. (My personal sample size is higher for the Lexus brand than other luxury automobiles.)

If You Can Honestly Say 'Yes' to These 7 Questions, Your Emotional Intelligence Is Higher Than You Think One thing I know is that drama in the workplace is inevitable as long as human beings are involved. Words and actions will be misinterpreted, egos will clash, buttons will be pushed, and people will arrive at different, and often, wrong conclusions. Whatever the case, if your work demands to be in close contact with people -- especially the people you'd like to avoid -- having the emotional intelligence to know how to respond to challenging circumstances will save you a lot of headaches. People with emotional intelligence use self-awareness to their advantage to assess a situation, get perspective, listen without judgment, process, and hold back from reacting head-on. At times, it means the decision to sit on your decision. By thinking over your situation rationally, without drama, you'll eventually arrive at other, more sane conclusions.

Page 5 of The $9 Billion Witness: Meet JPMorgan Chase's Worst Nightmare She tried to stay quiet, she really did. But after eight years of keeping a heavy secret, the day came when Alayne Fleischmann couldn't take it anymore. "It was like watching an old lady get mugged on the street," she says. "I thought, 'I can't sit by any longer.'" Fleischmann is a tall, thin, quick-witted securities lawyer in her late thirties, with long blond hair, pale-blue eyes and an infectious sense of humor that has survived some very tough times. The Secret To Getting Other People To Trust You Quickly Psychiatrists and therapists face a daunting challenge. They usually have only a short time after first meeting a patient to earn their trust. Showcasing expertise and credentials helps in that process, but it only goes so far. Showing vulnerability, it turns out, can be an enormously effective tool for helping you succeed in a range of situations. Here's how.

m.fastcompany If you Google “morning routine,” you’ll receive more than 24 million search results, and for good reason: Early risers seem to get more done and live happier lives. Some of the most successful entrepreneurs understand the benefits of having an early-morning routine: Starbucks’s Howard Schultz, GE’s Jeff Immelt, and Xerox’s Ursula Burns are just some of the early birds famous for rising before 6 a.m. to get ahead on their work. But a morning routine is only half of a productive day; the other is the evening routine that precedes it. Here are seven evening routines of famous and successful creatives, and how you can apply them to your own life.

The 100 best books of the 21st century I Feel Bad About My Neck by Nora Ephron (2006) Perhaps better known for her screenwriting (Silkwood, When Harry Met Sally, Heartburn), Ephron’s brand of smart theatrical humour is on best display in her essays. Confiding and self-deprecating, she has a way of always managing to sound like your best friend – even when writing about her apartment on New York’s Upper West Side. This wildly enjoyable collection includes her droll observations about ageing, vanity – and a scorching appraisal of Bill Clinton.Read the review Broken Glass Worst SF Decisions You make great decisions all of the time, starting with the fact that you live in San Francisco. But c'mon, admit it: you make some terrible ones as well. Hopefully, none of them are these: Flickr/Shando Darby Giving up your rent-controlled apartment Unless you’re a Twitter millionaire which, ugh, you probably are if you would do something so frivolous.