16 Ways I Blew My Marriage 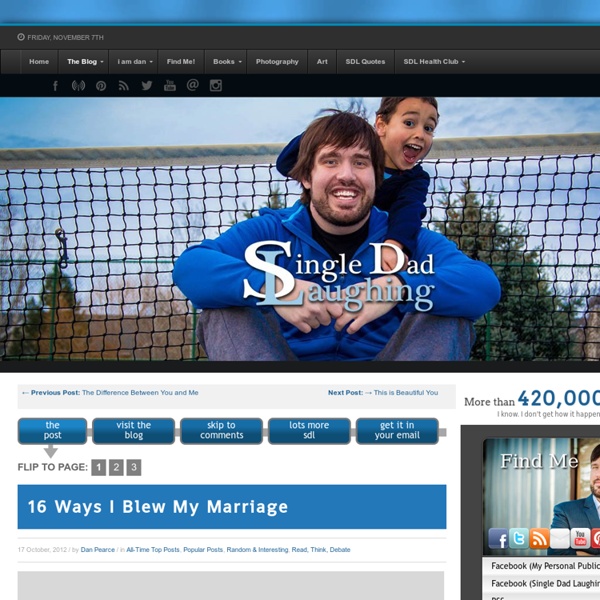 You know what blows big time? The other night I was sitting with my family, most of whom are very successfully married. We were going in a circle giving our best marriage advice to my little sister on the eve of her wedding. It’s somewhat of a family tradition. But that’s not what blows. And so, when it was my turn, I just made a joke about divorce and how you should always remember why you loved your spouse when you first met her so that when times get tough, you can find someone new that is just like she was. There were a couple courtesy giggles, but overall my humor wasn’t welcome in such a beautifully building ring of profundity. They finished round one, and for some reason started into another round. It eventually came to me again, and what I said would have been such great advice if I were a tenth as good at saying things as I was at writing them. And so, that night, I sat down and wrote out my “advice list” for my little sister. I call it my “Ways I Blew My Marriage” list. BONUS!

Men Have Periods Too! Please read the entire thing, however, for those of you who are excited to hear that men have periods too and need to read that section right away to feel good about yourself then scroll down below to the part that says: BUT NEWS FLASH PEOPLE - - MEN HAVE PERIODS TOO! and you will find all the information to back it up! I am so tired of guys belittling the idea of a woman's period during a fight and using that as a reason for why we are "irrational," "overreacting," or even "raging." Ok, first off, let's talk about PMS or Premenstrual Syndrome. ... Symptoms of PMS include but are not limited to:Abdominal bloatingAbdominal crampsBreast tenderness or swellingStress or anxietyAggressionTrouble falling asleep (insomnia)Joint or muscle painInability to finish thoughtsHeadacheFatigueAcneExtreme tearfulnessMood swingsWorsening of existing skin disorders, and respiratory (eg, allergies, infection) or eye (bulbar disturbances, conjunctivitis) problems ... So what causes PMS? Don't believe me? ...

Why Do Girls Love Shopping So Much? "You know that thing when you see someone cute and he smiles and your heart kind of goes like warm butter sliding down hot toast? Well that's what it's like when I see a store. Only it's better." - Rebecca Bloomwood, Confessions of a Shopaholic Comparing a physical attraction to buying something seems a little far-fetched, doesn't it? What Does Science Have To Say Most men (and I say men because they always seem bewildered by our love for buying things) tend to think that our indulgence in malls has to do with an emotional weakness, our inability to resist pretty things, our need to have what the another woman has, and also an excuse to just spend some time with our girls. Scientists have spent a lot of time trying to figure out the seemingly irrational love women have for shopping. Millennia later the basics remain the same. So the next time you wonder why we enjoy shopping so much, remember that even science agrees that it is a genetic flaw that we have to look for the best.

Rock the Party: How to Appear Friendly and Approachable It’s natural to experience nervousness when meeting new people. So much hangs in the balance of that delicate first impression. Act the wrong way and you might be perceived as stupid, weird, or worst of all, the dreaded creepy. To prevent this from happening, its important to understand body language and the way it affects perception. The Basics of Body Language The idea of reading body language can seem like voodoo, but the truth is you’re already doing it. Do you ever have impressions of people that don’t seem justified? Once you start paying attention, these signal are easy to spot. Projecting Openness The key to appearing friendly and approachable is projecting openness. Arms at sides (as opposed to crossed).Outward facing palmsLegs stretched out and uncrossedElbows away from the bodyLeaning forward (like you’re interested)Standing straight (no slouching) If you are in a good mood and open to meeting people, you’ll naturally have open body language. Eye Contact Engaging in Conversation

How to Improve Your Social Skills: 8 Tips from the Last 2500 Years Image by nogoodphotography. One source for pretty reliable advice is what has been repeated. Not what’s been repeated throughout your life but throughout history. I think this applies to tips on improving your social skills. 1. “Nature gave us one tongue and two ears so we could hear twice as much as we speak.”Epictetus “The less you speak, the more you will hear.” This is probably one of the most underappreciated social skills. How do you get past it? One useful way that I have found is to just forget about yourself. If you start to actually listen to what people are saying it also becomes easier to find potential paths in the conversation. And this ties into the next tip… 2. “You can make more friends in two months by becoming really interested in other people than you can in two years by trying to get other people interested in you. If you become more interested in people then you’ll naturally become a better listener since you are actually interested in what’s on their minds. 3. 4. 5.

Scientific Speed Reading: How to Read 300% Faster in 20 Minutes (Photo: Dustin Diaz) How much more could you get done if you completed all of your required reading in 1/3 or 1/5 the time? Increasing reading speed is a process of controlling fine motor movement—period. This post is a condensed overview of principles I taught to undergraduates at Princeton University in 1998 at a seminar called the “PX Project”. I have never seen the method fail. The PX Project The PX Project, a single 3-hour cognitive experiment, produced an average increase in reading speed of 386%. It was tested with speakers of five languages, and even dyslexics were conditioned to read technical material at more than 3,000 words-per-minute (wpm), or 10 pages per minute. If you understand several basic principles of the human visual system, you can eliminate inefficiencies and increase speed while improving retention. First, several definitions and distinctions specific to the reading process: You do not read in a straight line, but rather in a sequence of saccadic movements (jumps).

Splankna: Sarah Thiessen - health psychology Calendar Win: Rapid Course Correction In November I posted about my calendar-based time management system for generating the habits you want to have, a modified version of the classic Lifehacker/Seinfeld "don't break the chain" system. Here's why it's awesome. As a concrete example, I decided I was going to create a complete track, and then promptly stopped working on music at all. It took me two days to notice the connection, and that's with an external reminder system making the fact obvious. In the past, I probably would have struggled with that for two years before I noticed. I'm not even speaking hypothetically here; that's pretty much a real-world example. Just like with fast-running tests that pass or fail quickly, showing you in real time whether or not your code is any good, the win is immediate response. Seeing that the result is across-the-board productivity fail, I'm going to go with something different. For a long time, this would have been very unlike me.