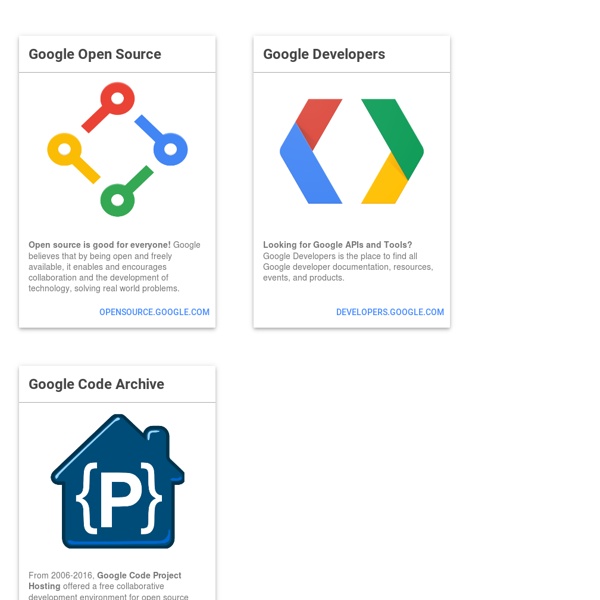 Sites - Websites for everyone! Video Singer and songwriter WilliamWhite creates his own website With Sitesweb design isjust plain fun! With Sites, the website con­struction kit, you can design your own website without having to read a manual. Sites is intuitive to use and easy to become skilled at. You can easily put any content together by dragging & dropping. Watch the video. XSL Transformations (XSLT) Abstract This specification defines the syntax and semantics of XSLT, which is a language for transforming XML documents into other XML documents. XSLT is designed for use as part of XSL, which is a stylesheet language for XML. In addition to XSLT, XSL includes an XML vocabulary for specifying formatting.

Using OAuth 2.0 to Access Google APIs - Authentication and Authorization for Google APIs - Google Code Basic steps All applications follow a basic pattern when accessing a Google API using OAuth 2.0. At a high level, you follow four steps: 1. 18 Forums Web Designers Shouldn’t Missed Whether you hit a design block, encounter technical difficulties in terms of HTML / CSS / Javascripts, in the search for open source scripts or simply just seeking for design feedbacks; you probably should be looking for a site where people of the same interest gathers – forum. As a designer-cum-developer I find myself visiting forums quite frequent, not to chat but rather to check out what’s new, what’s in trend or the hottest topics discussed. Participating in forums discussion not only allows you to share your interest and techniques with fellow peers, but as well as mutually gaining in terms of skills and knowledge. Here’s a list of forums I’ve come across or been really active in. Full list after jump.

The Forms Working Group The Forms working group is chartered by the W3C to develop the next generation of forms technology for the world wide web. The mission is to address the patterns of intricacy, dynamism, multi-modality, and device independence that have become prevalent in Web Forms Applications around the world. The technical reports of this working group have the root name XForms due to the use of XML to express the vocabulary of the forms technology developed by the working group. The Forms Working Group is comprised of W3C members and invited experts. The Working Group meets weekly by phone. Face to face meetings occur roughly every 3 months and are hosted by member organizations.

simple - Simple Compiler And Runtime Update: We fixed a couple more problems with the Windows binary distribution. The download file has been updated. Our apologies! Blog directory – News from Google Whether it’s a product or feature launch or a cool new initiative, chances are that you’ll read about most news from Google on one of our blogs. We started blogging in May of 2004 and now have a network of company blogs that cover topics as diverse as our renewable energy policies, product updates, developer challenges and code snippets, and information for advertisers and partners. The official blog for information about the AdWords, AdSense, DoubleClick and AdMob APIs and SDKs Das offizielle deutsche AdSense-Blog El blog oficial de AdSense en español Le Blog officiel AdSense en français Il blog ufficiale di AdSense in Italiano Het Officiële Nederlandse Google AdSense Blog Oficjalny polski blog o AdSense O blog oficial do AdSense em português Google AdSense 中文網誌 Google’a içeriden bir bakış.

About Moodle is a learning platform designed to provide educators, administrators and learners with a single robust, secure and integrated system to create personalised learning environments. You can download the software onto your own web server or ask one of our knowledgable Moodle Partners to assist you. Moodle is built by the Moodle project which is led and coordinated by Moodle HQ, an Australian company of 30 developers which is financially supported by a network of over 60 Moodle Partner service companies worldwide.

Book excerpt: Converting XML to spreadsheet, and vice versa Often it is useful for XML data to be presented as a spreadsheet. A typical spreadsheet (for example, a Microsoft Excel spreadsheet) consists of cells represented in a grid of rows and columns, containing textual data, numeric data, or formulas. An Excel spreadsheet defines some standard functions such as SUM and AVERAGE that you can specify in cells.

SPDY: An experimental protocol for a faster web Some specific technical goals are: To allow many concurrent HTTP requests to run across a single TCP session.To reduce the bandwidth currently used by HTTP by compressing headers and eliminating unnecessary headers.To define a protocol that is easy to implement and server-efficient. We hope to reduce the complexity of HTTP by cutting down on edge cases and defining easily parsed message formats.To make SSL the underlying transport protocol, for better security and compatibility with existing network infrastructure. Although SSL does introduce a latency penalty, we believe that the long-term future of the web depends on a secure network connection. In addition, the use of SSL is necessary to ensure that communication across existing proxies is not broken. To enable the server to initiate communications with the client and push data to the client whenever possible.

Google preuve »est Dieu - Eglise de Google By Matt MacPherson Google is the closest thing to an Omniscient (all-knowing) entity in existence, which can be scientifically verified. She indexes over 9.5 billion WebPages, which is more than any other search engine on the web today. Not only is Google the closest known entity to being Omniscient, but She also sorts through this vast amount of knowledge using Her patented PageRank technology, organizing said data and making it easily accessible to us mere mortals. Google is everywhere at once (Omnipresent). Google is virtually everywhere on earth at the same time.

AdWords: Keyword Tool With Keyword Planner, we've combined the functionality of Keyword Tool and Traffic Estimator to make it easier to plan search campaigns. That's why Keyword Tool is no longer available. You can use Keyword Planner to find new keyword and ad group ideas, get performance estimates for them to find the bid and budget that are right for you, and then add them to your campaigns. Note Official Press Release New York City, Sept 1, 2011 Design2Dev Inc, a NYC-based web studio, has released ConvertMyFlash™ < ConvertMyFlash.com > -- a turnkey service that solves two major drawbacks of flash sites today -- their incompatibility with search engines and mobile devices -- by converting Flash sites into HTML5 sites that are: 1. Fully indexable by all Search Engines (SEO-friendly). 2. Highly shareable on Social Networks.

sorry! vin.. I'm not a developer..just added this pearl if someone need it.. or just as bookmark. by kvdheeraj Sep 27

Hi Dheeraj, I know about code.google.com Are you pointing at anything specific. What kind of development do you do? by vin Sep 27