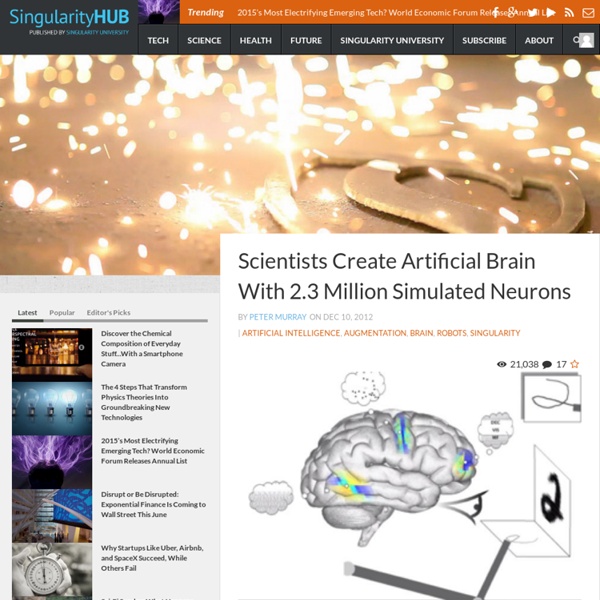 Scientists Create Artificial Brain With 2.3 Million Simulated Neurons Another computer is setting its wits to perform human tasks. But this computer is different. Instead of the tour de force processing of Deep Blue or Watson’s four terabytes of facts of questionable utility, Spaun attempts to play by the same rules as the human brain to figure things out. Spaunstands for Semantic Pointer Architecture: Unified Network. Will AI brains of the future look more like Watson or Spaun? And its performance was similar to that of a human brain. The important thing here is not how well Spaun performed on the tasks – your average computer could find ways to perform much better than Spaun. Chris Eliasmith, from the University of Waterlook in Ontario, Canada and lead author of the study is happy with his cognitive creation. Watch Spaun work through its tasks in the following video. One thing Spaun can’t do is perform tasks in realtime.

How to build a brain | Nengo Introduction The book 'How to build a brain' (amazon link) from Oxford University Press came out in May 2013. It exploits the Neural Engineering Framework (NEF) to develop the Semantic Pointer Architecture (SPA) for cognitive modelling. The book uses Nengo to explain and demonstrate many of the central concepts for these frameworks. This section of the website supports the book by providing links to models, demos, videos, and tutorials mentioned in the book, which are on this website. Submenus at left will take you to content related to specific chapters. If you're looking for information specifically on Spaun (which is in chapter 7 of the book), please see our Science paper, and our videos of the model in action. The Semantic Pointer Architecture (SPA) Briefly, the semantic pointer hypothesis states: Higher-level cognitive functions in biological systems are made possible by semantic pointers. An example All of the control like steps (e.g.

A Worm's Mind In A Lego Body Take the connectome of a worm and transplant it as software in a Lego Mindstorms EV3 robot - what happens next? It is a deep and long standing philosophical question. Are we just the sum of our neural networks. Of course, if you work in AI you take the answer mostly for granted, but until someone builds a human brain and switches it on we really don't have a concrete example of the principle in action. KDS444, modified by Nnemo The nematode worm Caenorhabditis elegans (C. elegans) is tiny and only has 302 neurons. The model is accurate in its connections and makes use of UDP packets to fire neurons. The software works with sensors and effectors provided by a simple LEGO robot. The same idea is applied to the 95 motor neurons but these are mapped from the two rows of muscles on the left and right to the left and right motors on the robot. And the result? It is claimed that the robot behaved in ways that are similar to observed C. elegans. Watch the video to see it in action. Is it alive?