4 Principles For Creating Change, And 4 Barriers That Make It Harder 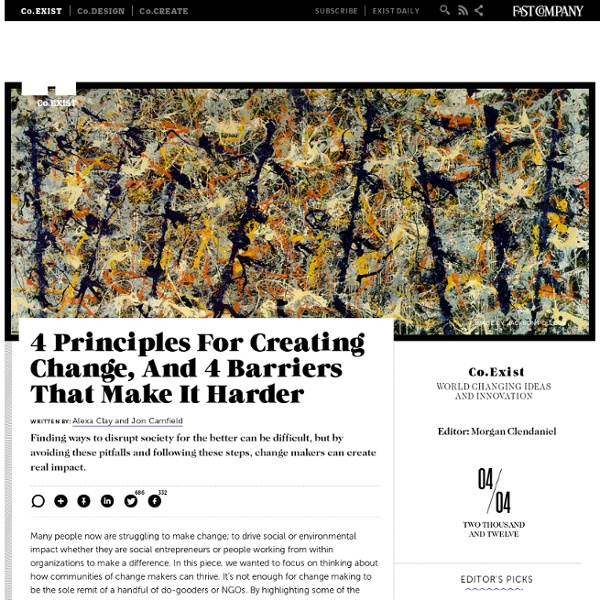 Many people now are struggling to make change; to drive social or environmental impact whether they are social entrepreneurs or people working from within organizations to make a difference. In this piece, we wanted to focus on thinking about how communities of change makers can thrive. It’s not enough for change making to be the sole remit of a handful of do-gooders or NGOs. By highlighting some of the barriers and core principles that are vital to the success of a world in which everyone is a change maker, we hope to begin to mainstream the art of change making and destroy the social entrepreneur’s monopoly on social change. Barrier 1: Experts As Idols Too often change making is outsourced to experts or social entrepreneurs rather than community members. Barrier 2: Conditions Of Problem Solving Are Overlooked Much of the time, we are quick to jump to tactical problem solving without fully reflecting on whether the conditions for it are put in place. Barrier 4: Learning Is One to One Related:  Building a movement

Meet The Unreasonables Every year, the Unreasonable Institute gathers 25 social entrepreneurs from around the world into a house in Boulder, Colorado. For six weeks, these men and women meet with mentors and work on the business plans for their ventures, which run the gamut from increasing recycling in Mexico to cleaner burning coal for African farmers. During the last session, the participants were followed around by a camera crew, and we’ll be airing that footage here on Co.Exist. Their stories are inspiring in and of themselves, and perhaps in hearing about their struggles and successes, everyone working on a world-changing project (or thinking about starting one) can find a few lessons. This is a short preview of the upcoming season.

The Official Idle No More Website - Idle No More 10 Points On The Science Of Spreading The Word This piece is from a new PopTech Edition about harnessing social contagion for social good. Visit for more interviews, essays and videos with leading thinkers on this subject. 1. Good deeds are contagious We naturally imitate the people around us, we adopt their ideas about appropriate behavior, and we feel what they feel. Acts of charity are no exception. 2. That same experiment showed that contagious generosity spreads up to three steps through the network (from person to person to person to person), and when we added up all the extra donations that resulted at every step, we found that an extra dollar in giving yielded three extra dollars by everyone else in the network. 3. People are bombarded by information and appeals every day, especially in our newly mobile and tech-centered society, so the effect of any one appeal to do a good deed may get lost. 4. 5. 6. 7.… but don’t overdo it! 8. 9. 10. Everything we do ripples through our network.

5 Characteristics of a Change Agent cc licensed ( BY ) flickr photo shared by visualpanic (change agents) – People who act as catalysts for change… In my work through school and organization visits, I have been fascinated to see the correlation between the speed of change and an individual who is “leading” the charge. The schools that have someone (or a group of people) helping to push the boundaries of what can be done in schools seem to move a lot quicker with a larger amount of “buy-in” through the process. As Malcom Gladwell describes in his book, “The Tipping Point“, he states: The success of any kind of social epidemic is heavily dependent on the involvement of people with a particular and rare set of social gifts. Although Gladwell talks about the “Law of the Few” (connectors, mavens, salesman), I do not believe change is solely dependent upon their skills, but also the culture in which they exist. you are in an environment where people do not want to come together. a huge bearing on their success. 1.

If You Want It Done Right, Don’t Do It Yourself Time is our most limited resource, and knowing how to maximize it is imperative. Successful people across the globe have clearly figured this out, deliberately deciding to concentrate on tasks where they are most productive, while outsourcing the tasks where they are less so. This results in higher productivity (and well-being) for everyone involved. To achieve the highest productivity and well-being for society as a whole, we must focus on honing our strongest skills instead of spreading ourselves thin by trying to do everything. Consider this little parable: Two men are alone on a deserted island. Despite the fact that the younger man has an absolute advantage in all activities, it is not in the interest of either of them to work in isolation; they both can benefit from specialization and exchange. Although it’s clearly oversimplified, the idea of the two men on the island can help to illustrate the economic theory of the law of comparative advantage.