Tesla's Model S Autopilot is Amazing! The 12 greatest entrepreneurs of our time - From dreamers to doers (1) - CNNMoney. When Jeff Bezos came up with the idea for what would become Amazon.com, he went on a stroll in Central Park with his boss at the time to share his epiphany. 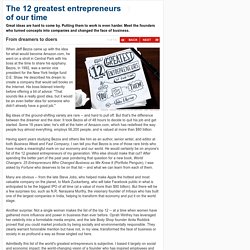 Bezos, in 1992, was a senior vice president for the New York hedge fund D.E. Shaw. He described his dream to create a company that would sell books on the Internet. His boss listened intently before offering a bit of advice: "That sounds like a really good idea, but it would be an even better idea for someone who didn't already have a good job. " Big ideas of the ground-shifting variety are rare -- and hard to pull off. Having spent years studying Bezos and others like him as an author, senior writer, and editor at both Business Week and Fast Company, I can tell you that Bezos is one of those rare birds who have made a meaningful mark on our economy and our world. 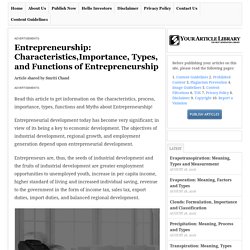 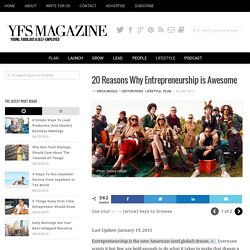 At YFS Magazine we know how awesome it is to be an entrepreneur and endeavor to empower you to know the same. But what is it that drives would-be entrepreneurs to strike out on their own? What were some of the world’s most successful founders, small business owners, and CEO’s thinking when they decided to unleash their genius into the world? Here are twenty simple reasons why being your own boss (entrepreneurship, in general) is awesome. As an entrepreneur you can: 1.

You are completely in charge of your earning potential. 2. For the most part, as an entrepreneur you have greater command of your schedule. The Definition of Success, According to 5 Entrepreneur Superstars. Although the definition of success is subjective, there seem to be some common themes among the ultra-successful about what success really means. 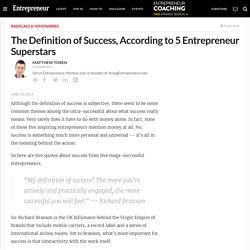 Very rarely does it have to do with money alone. In fact, none of these five inspiring entrepreneurs mention money at all. No, success is something much more personal and universal -- it’s all in the meaning behind the action. So here are five quotes about success from five mega-successful entrepreneurs. “My definition of success? Sir Richard Branson is the UK billionaire behind the Virgin Empire of brands that include mobile carriers, a record label and a series of international airline routes.

Related: Arianna Huffington Wants to Redefine Success. What gets you fired up? “My definition of failure became not trying, not the outcome.” -- Sara Blakely While Sara Blakely’s quote is technically the definition of failure, it’s the crux of what success is: to try and try and not be afraid of failure. Exclusive Offer. 5 Learnings From Entrepreneurial Journey of Elon Musk. Everybody has heard of Elon Musk. 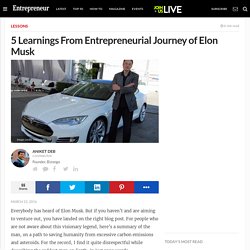 But if you haven’t and are aiming to venture out, you have landed on the right blog post. For people who are not aware about this visionary legend, here’s a summary of the man, on a path to saving humanity from excessive carbon emissions and asteroids. For the record, I find it quite disrespectful while describing the raddest man on Earth, in just 1000 words.