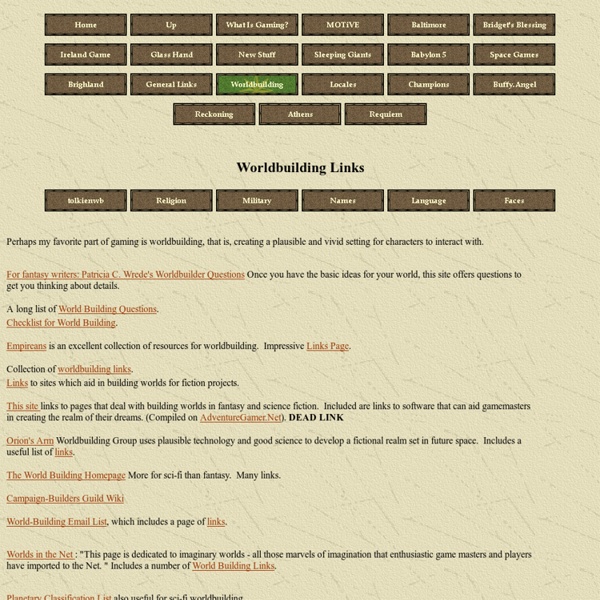 Berley’s Top 10 World Building Tips for Sci Fi or Fantasy Like I have mentioned in past blog posts, it took me ten years of writing and collecting rejection letters to get to level I am today. And even so I’m still working and still climbing. Always working and always writing to improve my craft. The bad part about going through those ten years is obvious, even the annoyingly cliche parts. Themes & Things To Keep In Mind When Writing Fantasy Stories and Adventures » Daily Encounter This list is far from complete. It’s not even trying to be complete. It knows better than that. It just wants to be helpful and provide some inspiration here and there; you know, offer little suggestions that might lead to bigger ideas.

List of forms of government Government of any kind currently affects every human activity in many important ways. For this reason, political scientists generally argue that government should not be studied by itself; but should be studied along with anthropology, economics, history, philosophy, science, and sociology. Political science Etymology From Middle English government,[citation needed] from Old French government[citation needed] (French gouvernement), from Latin gubernatio ("management, government"). Government is a compound formed from the Ancient Greek κυβερνάω (kubernaō, "I steer, drive, guide, pilot") and the Latin -mente, ablative singular of mēns ("mind").

World Building 101 I love the fantasy and sci-fi genre, so this is something that I wanted to research myself. I haven’t done many posts on world building, but I think it’s important in ANY genre because in fiction you usually are creating your own world no matter what (even if it is based on our own world). You are always putting your own imagination into your stories and it’s important that your vision comes across to your readers. When we think of world building, we generally think of Lord of the Rings and Tolkien’s Middle Earth. Tolkien’s mythology of Middle Earth, however, was based on Anglo-Saxon history and was drawn from his different experiences. You, as a writer, can create your own mythology and can build your own worlds, even if they’re somewhat based on our world.

Magical World Builder By, Stephanie Cottrell Bryant The Magical World Builder's Guide is a tool for creating a fantasy universe. Although there are several good guidebooks to creating a science fiction world, few deal with the quintessential elements of a fantasy realm. Template for Creating and Building a New Fantasy Race for your Fictional World In fantasy world building and writing, the term "race" is loosely used to describe a sentient or sapient life form with a similar degree of intelligence and awareness as that of a human. Generally a new race will have shared traits and will be aware of its self and its environment. The way your race interacts with its environment will influence the local ecosystems and they will use the world's resources to better their standard of living and interact together in a social capacity. Creating an entirely new fantasy race can be a daunting task for a fantasy world builder or writer. Having a good design template to begin drafting the various characteristics of your race is important for shaping a well rounded creation. Even if your race is not completely unique to your world, you can use this template to record the characteristics for all your races on your fantasy world.

A Heterogeneous World By Rang Lieu©2003, Rang Lieu "Variety is the spice of life." ant to spice up your world? 10 Steps to Creating Realistic Fantasy Animals by Ashley Lange Why do writers write? Because it isn't there. - Thomas Berger Arguably, the two most challenging aspects for fantasy/science fiction writers to conquer are originality and believability. Questions to guide you in worldbuilding for fantasy or science-fiction — Veronica Sicoe I’ve been busy worldbuilding this week. It’s one of my favorite things to do in the process of writing sci-fi, and it makes me all giddy and drooly like a kid that’s been dropped into a toybox. Since I revisited my collected materials for the worlds I’m writing in, and have overhauled one of these entirely, I grabbed the opportunity to put together a list of important worldbuilding questions to share with you. Not every author goes about worldbuilding the same way — and that’s perfectly fine, since not every genre needs it, and not every story is focused primarily on the setting. Also, not all aspects of a world or society are equally relevant to that particular plot. But even if you’re only using the setting as a wallpaper, you still need to understand how it works and why, so that you don’t accidentally slip and kill the reader’s suspension of disbelief.

The Arts in Worldbuilding By K.R. Mercik © 2002, K.R. Mercik Kaspan stood at the edge of the circle by the fire, watching the travelers whirl around like madmen. On logs to either side of him the music-makers sat, lost in the world of their art, seeming to have drifted away from the mundane reality behind them. Kaspan watched them as they beat against drums or piped away on the long, thin instrument they called a floute, a complex metal instrument with several buttons that were pressed to close more holes than a man has fingers on his hand. Creating Fantasy Nations (World Building II) By this point you've got your map and the basics for one of your ideas. It's time to put people on these continents. If you haven't already, ask yourself the basics about each culture you want to generate. Taken from World Building I, those are: What are the needs of this culture?