Research Topic: The changes in Disney World over time 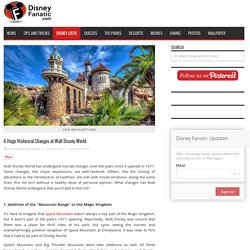 Some changes, like major expansions, are well-received. Others, like the closing of attractions or the introduction of FastPass, are met with mixed emotions. Along the same lines, this list isn’t without a healthy dose of personal opinion. What changes has Walt Disney World undergone that you’d add to this list? 1. It’s hard to imagine that Space Mountain wasn’t always a key part of the Magic Kingdom, but it wasn’t part of the park’s 1971 opening. Splash Mountain and Big Thunder Mountain were later additions as well. 2.

Say what you will about FastPass, especially in its most recent incarnation as FastPass+. 3. On one hand, it’s sad to think about some of our old favorites at the Magic Kingdom that no longer exist. 20,000 Leagues Under the Sea, Snow White’s Scary Adventures, Mr. 4. When Animal Kingdom opened in 1998, there was much less to do than there is today. 5. 6. Magical Nostalgia: 60 Lost Attractions of Walt Disney World. Walt Disney World has evolved significantly over the last four decades. 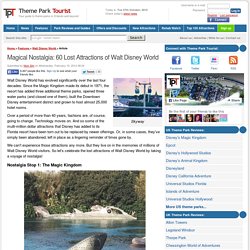 Since the Magic Kingdom made its debut in 1971, the resort has added three additional theme parks, opened three water parks (and closed one of them), built the Downtown Disney entertainment district and grown to host almost 25,000 hotel rooms. Over a period of more than 40 years, fashions are, of course, going to change. Technology moves on. Walt Disney World Magic Kingdom Facts. Magic Kingdom opened as the first part of Walt Disney's planned Florida Project on October 1, 1971. 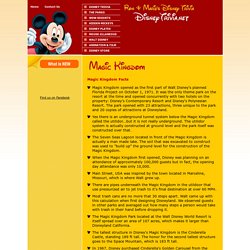 It was the only theme park on the resort at the time and opened concurrently with two hotels on the property: Disney's Contemporary Resort and Disney's Polynesian Resort. The park opened with 23 attractions, three unique to the park and 20 copies of attractions at Disneyland.Yes there is an underground tunnel system below the Magic Kingdom called the utilidor...but it is not really underground. The utilidor system is actually constructed at ground level and the park itself was constructed over that.The Seven Seas Lagoon located in front of the Magic Kingdom is actually a man made lake. Magic Kingdom at Walt Disney World Statistics. 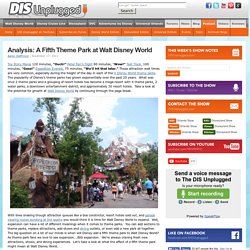 Walt Disney World Resort: Then and Now (PHOTOS) Living up to its motto "Where Dreams Come True," Walt Disney World has been bringing dreams into the lives of families for more than 40 years. 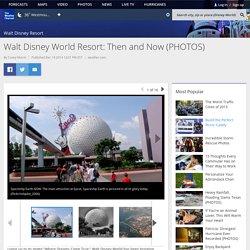 Since its opening on October 1, 1971, Walt Disney World Resort has been a popular vacation destination for tourists from all over the world. Located in Lake Buena Vista, Fla., Walt Disney World has grown from the original 142-acre theme park (later named Magic Kingdom Park) to include a total of four theme parks, two water parks, Downtown Disney, and 35 resort properties. (MORE: Adventures by Disney) The massive growth of World Disney World Resort over the years can be understood by the total number of Cast Members, or employees, as each new attraction creates the need for more jobs.

A history of Disney World ticket price increases. 18 Numbers That Tell Us How Big Walt Disney World Is - Disney Dining Information. By Cassie Number of guests: Walt Disney World is the leading theme park in the world, based on park attendance reaching 18.6 million for 2013. 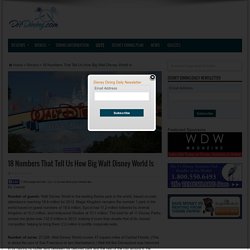 Magic Kingdom remains the number 1 park in the world based on guest numbers at 18.6 million, Epcot had 11.2 million followed by Animal Kingdom at 10.2 million, and Hollywood Studios at 10.1 million. The total for all 11 Disney Parks across the globe was 132.5 million in 2013, making it more than double that of its closest competitor, helping to bring them 2.2 million in profits corporate wide. Number of acres: 27,258. Facts About Disney World in Florida. Disney World in Florida is a popular vacation destination for United States and international visitors. 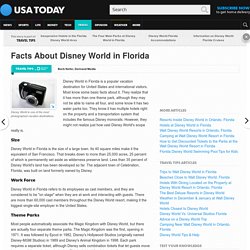 Most know some basic facts about it. They realize that it has more than one theme park, although they may not be able to name all four, and some know it has two water parks too. They know it has multiple hotels right on the property and a transportation system that includes the famous Disney monorails. Disney's Environmentally Friendly World. Walt Disney Parks and Resorts Takes Steps Towards an Eco-Friendly Future. Last week, the Disneyland Resort was honored with a Governor’s Environmental and Economic Leadership Award, California’s highest environmental honor, for waste-reduction efforts. 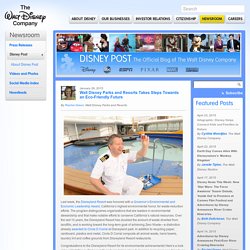 The program distinguishes organizations that are leaders in environmental stewardship and that make notable efforts to conserve California’s natural resources. Over the last 10 years, the Disneyland Resort has doubled the amount of waste diverted from landfills, and is working toward the long-term goal of achieving Zero Waste—a distinction already awarded to Circle D Corral at Disneyland park. UCLA Institute of the Environment and Sustainability Newsroom. The term “sustainable tourism” has come into vogue recently, defined as tourism development that avoids damage to the environment, economy and cultures of the locations where it takes place while providing a positive experience for local people, tourism companies and tourists themselves. 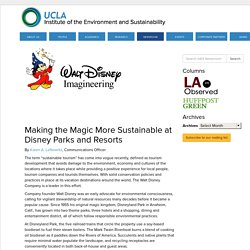 With solid conservation policies and practices in place at its vacation destinations around the world, The Walt Disney Company is a leader in this effort. Company founder Walt Disney was an early advocate for environmental consciousness, calling for vigilant stewardship of natural resources many decades before it became a popular cause. Since 1955 his original magic kingdom, Disneyland Park in Anaheim, Calif., has grown into two theme parks, three hotels and a shopping, dining and entertainment district, all of which follow responsible environmental practices. At Disneyland Park, the five railroad trains that circle the property use a soy-based biodiesel to fuel their steam boilers. 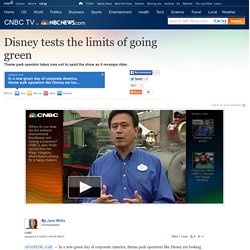 But not everything at Disneyland can go green in a big way. When you're in the business of creating fantasy, when employees are called cast members and the park is a stage, Disney says no green initiative is worth it if it ruins the show. “Our culture is that we want to be very careful about those pieces that we put on stage, and we don't want to take that feel of the show away from the guests,” said Frank Dela Vara of Disneyland Environmental Affairs. Disneyland Monday re-launched one of its oldest attractions, the submarine ride, nine years after it emptied the lagoon.

The original submarine ride was launched at Disneyland in 1958, and the gunmetal gray submarines ran on diesel. “But at Imagineering, we wouldn't let it die. “We used 30 tons of it, and it's going to last forever. French-fry memories? What's Coming to Disney and Universal in 2015 and Beyond! Welcome to Tad's totally awesome list of what's coming to Disney World in 2015 and beyond! As the keeper of all things cool (and head Frog Family videographer), I have put together a running list of all the attractions and experiences headed to the Orlando theme parks for the last few years.

Taking the Disney Guest Experience to the Next Level. At Walt Disney Parks and Resorts, we continually push the boundaries of creativity and innovation to deliver the best possible experience for our guests. We’re always looking for ways to take what we do and do it even better. Over the past few years, we’ve devoted considerable time and resources to create a more immersive, more seamless and more personal experience for each and every guest who spends time with us. I know there’s been significant speculation about these efforts among our fans, so we’re pleased to give you a glimpse into the work we are doing to take the entire Disney guest experience to the next level.

Some of these initiatives are more apparent and can already be seen by our guests – like our interactive queues at Walt Disney World Resort and the Enchanted Art on our cruise ships – while others are more behind-the-scenes and are focused on “how” visitors plan, access and enjoy their experiences with us. Disney's $1 Billion Bet on a Magical Wristband. If you want to imagine how the world will look in just a few years, once our cell phones become the keepers of both our money and identity, skip Silicon Valley and book a ticket to Orlando. Go to Disney World. Then, reserve a meal at a restaurant called Be Our Guest, using the Disney World app to order your food in advance.

The restaurant lies beyond a gate of huge fiberglass boulders, painstakingly airbrushed to look like crumbling remnants of the past. Crossing a cartoon-like drawbridge, you see the parapets of a castle rising beyond a snow-dusted ridge, both rendered in miniature to appear far away. How Disney Works to Win Repeat Customers. At Walt Disney World in Orlando, Fla., a 1% increase in repeat business translates into millions of dollars in revenue. How Disney (DIS) communicates its values to customers is critical to its success. To make sure each customer receives a positive experience, Disney has a strategy in place intended to woo "secondary guests;"—those who exert influence on the purchasing decision, but aren't considered the core customer.

The secondary guest can stand in the way of repeat business. "If a mother comes to your retail store and an employee is rude to her children, she may not return. If a parent is test-driving a new car and the kids are bored and unhappy, the parent may become distracted and more likely to leave without making a purchase," says Bruce Jones, programming director for the Disney Institute, the entertainment giant's professional development and external training arm.

Theme Park & Resort Closures. ** All information is subject to change.** Not all rehabs and closures listed appear on Disney’s official rehab calendar. For updated information on attraction closings, call 407-W-DISNEY (934-7639) just prior to your scheduled visit. Schedules below are meant as an informative rather than official guide and are gathered from a number of official and unofficial sources. October 2015 Walt Disney World Refurbishments Magic Kingdom Hair Wraps and Ring Carver Locations will close permanently in the Magic Kingdom park beginning October 1, 2015. Epcot Innoventions West is temporarily closed to prepare for a new guest experience. Expanding Star Wars, Toy Story at Disney&apos;s Hollywood Studios can take years for infrastructure, details.