Educate Yourself Without School 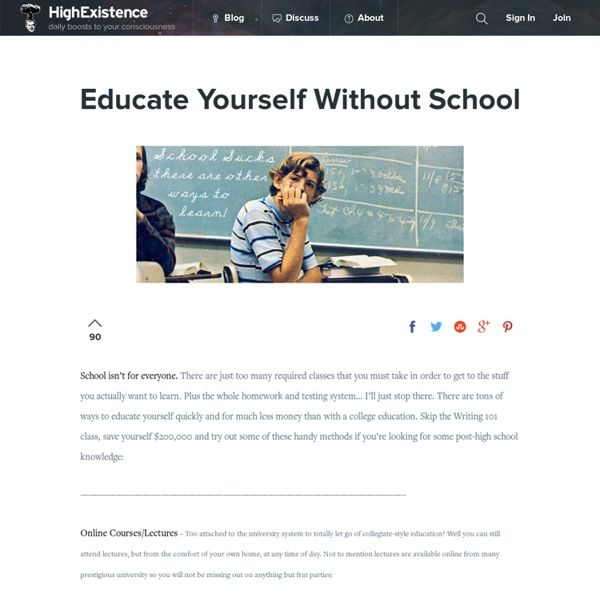 School isn’t for everyone. There are just too many required classes that you must take in order to get to the stuff you actually want to learn. Plus the whole homework and testing system… I’ll just stop there. There are tons of ways to educate yourself quickly and for much less money than with a college education. Skip the Writing 101 class, save yourself $200,000 and try out some of these handy methods if you’re looking for some post-high school knowledge: Online Courses/Lectures – Too attached to the university system to totally let go of collegiate-style education? - Stanford has an extensive collection of podcasts here- Berkeley records hundreds of lectures and puts them all online in different formats. For a more complete list of University courses offered online, check out this article from LifeHacker.com Podcasts – iTunes has thousands upon thousands of free podcasts, recordings like radio shows, about every topic imaginable. Great Podcasts:

The Freud Apps: AI, Virtual Life Coaching, and the Future of Psychotherapy Mental health and self-improvement services are increasingly accessible via mobile apps. The newest crop of these apps increasingly integrates Artificial Intelligence capabilities similar to Apple’s virtual assistant Siri. These intelligent systems will make our devices come to life, taking on new functions as our personal virtual ‘psychotherapist’ or life coach.

FANAA or EGO DEATH ( (fana fi 'Allah') & BAYAZID BISTAMI Enlightenment equals ego death. For millennia this equation has held true. While the term "ego," meaning "I" in Latin, is obviously a relatively recent addition to the English lexicon, just about every major enlightenment teaching in the world has long held that the highest goal of spiritual and indeed human life lies in the renunciation, rejection and, ultimately, the death of the need to hold on to a separate, self-centered existence. From Shankara's rantings against the ego as a "strong and deadly serpent" to Prophet Muhammad's declaration of a "holy war against the nafs [ego]" to the Zen masters' fierce determination to use any means necessary to break the ego's grip on their students. In sufi path Bayazid Bastami was one of the first to speak of "annihilation of the self in God" (fana fi 'Allah') and "subsistence through God" (baqa' bi 'Allah). Fanaa is the Sufi term for extinction.

How To Learn On Your Own: Make A Personal Scholar Resource Plan One of the most challenging and gratifying parts of learning alone is the opportunity to search for and select your own learning material. Students in traditional classrooms usually don’t get to decide how they are going to master course content. Instructors decide for them in the form of textbook selection, quizzes, tests, group projects, etc. As an independent learner, you can make your study time more effective by using only the learning methods that work for you. A resource plan is a document used to brainstorm the learning material you can use when you begin your studies. Structuring Biomimicry, Improving Building’s Resiliency The same way Einstein assumes the speed of light to be a constant of reference for his Theory of Relativity, the philosophy of biomimicry assumes Nature as a constant of reference to a performance-based beauty for design. Imitating nature has become a meaningful approach for contemporary architects and design futurists to the built environment, especially for those who foster a future that doesn’t compete with nature but coexist with it. At the light of recent natural disasters around the world, especially those geologically associated such as tsunamis and earthquakes, which have proven its destruction power over the current built environment; architects and structural engineers have found in biomimicry an ecological approach in order to improve future building’s disaster resilience. Present built structures are unresponsive to the Earth dynamics and aren’t completely adapted to the ecosystem flows of forces. Written by Wilfredo Mendez, M.Arch, AIT for IEET.org References:

25 Awesome Virtual Learning Experiences Online - Virtual Education Websites Just because you’re online doesn’t mean that you can’t experience the world first-hand — or as close to first-hand as possible. Here are websites that feature virtual learning experiences, exposing online visitors to everything from history to geography, astronomy to anatomy, literature to government. 7 Wonders Panoramas – 360-degree views of the Seven Wonders of the World. Arounder Virtual Tour of the Moon – 360-degree panoramic views of the moon, courtesy of the Apollo 11, 12 and 17 missions. (Many other Earth locations also available on arounder.com.) Frissiras Museum – A virtual art gallery from Athens, Greece that allows you to explore paintings by clicking through their entire collection.

17 Self-Help Books Everyone Should Read 5 Questions To Ask Before You Get Married What happens when a divorce lawyer, marital therapist, and dating coach convene for lunch? A rich conversation, that's what. I invited Carolyn Byrne (a matrimonial attorney) and Aimee Hartstein (a Read Some say self-help books were first written in the Egyptian era, others are of the opinion they came into being from the fourteenth century, while others call the Bible the first of such books. Whatever the exact origin, self-help books are written to help troubled individuals cope and deal with their respective problems. Seduction in Ancient Rome A look at relationships, seduction, and flirtation then and now, through the lens of one of the most salacious (and hilarious) love books of ancient times Though 21st-century flirting advice can seem plenty risqué, the ancient Ars Amatoria (Art of Love) by Roman poet Ovid is just as bawdy as love advice written today—maybe even more so. In fact, at times the book reads more like a seduction guide than a dating manual. Men are the primary audience of the Ars Amatoria, and Ovid’s suggestions are helpful for that gender regardless of century: be physically presentable, use flattery, don’t forget her birthday, and don’t ask about her age.

11 Productivity Hacks to Boost Your Mental Focus Making a dent in the universe requires focus. So we've collated 11 simple and easy to use tips on improving your mental concentration. Most of it is a basic stuff that I tried myself, so I selected what got me the best results. Top 6 Sites that Inspire and Educate If you’re a professional who likes to be intellectually stimulated and you enjoy keeping up with the latest news and breaking trends, the internet provides you with an endless choice of carefully curated sites to visit. Today, we bring you six of them that we believe are leaps and bounds above the rest. These sites will not only educate you on topics ranging from business and technology to art and design, they’ll motivate you to find your own, original ideas and see them through. They’re culturally relevant, they’re idea driven and most of all, they’re deeply inspirational.

Plan Your Free Online Education at Lifehacker U: Spring Semester 2013 I know several do, and while I can't speak for all of them, the Saylor Foundation — and, full disclosure, I am employed by them — has three courses that carry portable credit recommendations, with more credit pathways in the works. The recommendation requires a proctored online exam, which can range from free to not-very-expensive depending on how you obtain a proctor. Search NCCRS from the homepage, or get in touch! I'm currently taking the Evolution class (and am enrolled for the Sci-fi class mentioned above) through Coursera. How to Persuade People Persuasion is one basic motive behind human interaction. Whether you are talking to yourself or talking to others, we constantly tune our mind and heart either to persuade ourselves or to persuade people around us. One can learn the art of persuasion by having enhancing their intrapersonal skills, interpersonal skills, interaction skills (communication skills), imparting skills (presentation skills) and influencing skills, one can learn the art of The 5 I's of persuasion:- Intrapersonal intelligence Interpersonal intelligence Interaction intelligence Imparting Intelligence (Presentation Skills) Influence Intrapersonal Intelligence

Related:  HIGH EXISTENCE! • aviendha • HE • Helpful • ana192 • Interesting • College • self education • Culture
Related:  Learning Sites and Tools   -  sanaerbaibizipak   -  Curiosity & Growth   -  Self Betterment   -  Curiosity   -  Bookmarks: Soon Obsolete?   -  Everyday Mysteries: Fun Science Facts from the Library of Congress   -  If It Were My Home   -  Virtual Tours and Fieldtrips   -  Wonderopolis   -  Techmamas – Curating the Best of Tech and Social Media for Families   -  How Do We Know When Students Are Engaged? | Edutopia   -  Big Thinkers: Judy Willis on the Science of Learning - YouTube   -  VICE | Canada | The Definitive Guide to Enlightening Information   -  101questions   -  What is Content Curation?   -  The Content Strategist as Digital Curator · An A List Apart Article   -  Educational Leadership:Creativity Now!:Assessing Creativity   -  Home   -  Visible Thinking   -  AppCodes - App Store Optimization   -  25 Ways to Develop 21st Century Thinkers   -  Vocativ | Vocativ – See the world through new eyes   -  Content Curation Guide for SEO - What, How, Why - Moz   -  Typography in ten minutes | Butterick’s Practical Typography   -  Questioning - Top Ten Strategies   -  What Is Content Curation?   -  25 Reasons Why You MUST Go To Burning Man Once In Your Life   -  Smart Strategies That Help Students Learn How to Learn | MindShift   -  4 Phases of Inquiry-Based Learning: A Guide For Teachers   -  Growth Hacking | Communauté au service de votre croissance   -  What Does Earth Look Like? - YouTube   -  My Blog | A blog about society   -  Wait But Why   -  Need Some Motivation Right Now? Read This IMMEDIATELY   -  How to Learn on Your Own: Creating an Independent Scholar Resource Plan | Self Made Scholar - Free Self Education Classes Online   -  The Mushroom/LSD Experience Explained & Explored   -  20 Things That Mentally Strong People Don't Do   -  MintLife Blog | Personal Finance News & Advice | Top 10 Things That Determine Happiness   -  Growth Mindset Maths - Growth Mindset Maths