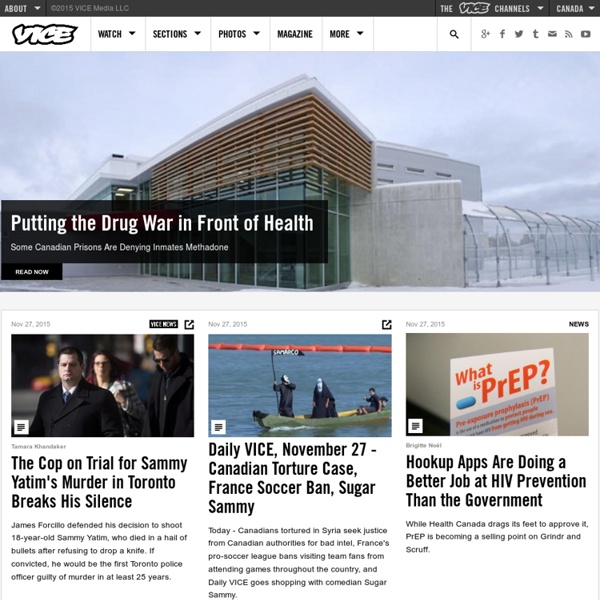 Cry-Baby of the Week This week: The Texas school that fired a teacher because she's transgender vs. the cop who pulled a gun on some kids making a tree fort. The Drone That Will Change Graffiti: An Interview with KATSU KATSU is an artist, a vandal, and a clever hacker too. His work pushes our idea of what can be achieved with the graffiti artist's limited tool-set. For his new project, he has developed a system to attach a spray can to a quadcopter, creating the world's first true graffiti drone. Are Google and Facebook Just Pretending They Want Limits on NSA Surveillance? The companies—along with dozens of other major tech firms, are actively opposing an initiative to prevent NSA spying known as the Fourth Amendment Protection Act, leaning on shadowy industry lobbying groups while they profess outrage in official statements. No, Why Don't YOU Shut the Fuck Up About 'Game of Thrones'?

Hipster Hipsters couldn't incite more blind hatred if they were all ginger-haired Al-Qaeda members. But why? Could it be their taste in music? Cancer drug resurfaces and threatens false optimism Andy Coghlan, reporter So, we hear news of a miraculous treatment for cancer. Disappointingly, the story is an old one which has somehow resurfaced on the blogosphere. When we originally published the story four years ago, it created a frenzy on the internet which took us by surprise. Our story reported a new type of treatment that in animal experiments showed promise of potentially being able to tackle most types of human cancer.

Find Free Kindle Books - Fevered Mutterings Disclaimer: this post is about free, legal Kindle books, of which there are shedloads (seriously, scroll downwards). It’s not sponsored by Amazon or anyone else. And if you’re reading, you probably have a Kindle. But if you were thinking of buying a Kindle for the first time, click through using the banner below – it won’t cost you anything, and this humble, pathetically modest writer gets a tiny amount of cash to help keep his silver champagne bucket full and his Ferrari well-tuned. Ta.

Canada threatens trade war with EU over tar sands Canada has threatened a trade war with European Union over the bloc's plan to label oil from Alberta's vast tar sands as highly polluting, the Guardian can reveal, before a key vote in Brussels on 23 February. "Canada will not hesitate to defend its interests, including at the World Trade Organisation," state letters sent to European commissioners by Canada's ambassador to the EU and its oil minister, released under freedom of information laws. The move is a significant escalation of the row over the EU's plans, which Canada fears would set a global precedent and derail its ability to exploit its tar sands, which are the biggest fossil fuel reserve in the world after Saudi Arabia. Environmental groups argue that exploitation of the tar sands, also called oil sands, is catastrophic for the global climate, as well as causing serious air and water pollution in Alberta. The unveiling of Canada's threats is the latest in a series of recent embarrassing revelations.

Ten Amazing Things You Can Do With Coconut Oil - Health - GOOD If you've read No More Dirty Looks, or our blog, you know my co-author Alexandra and I are fond of oils, and coconut oil in particular because it’s an amazing and cost-saving multitasker that has lots of qualities to recommend it. It’s a rich moisturizer, it’s cheap, it’s versatile, it’s antimicrobial, antifungal, and antibacterial, has a decent amount of antioxidants, and it smells like baked goods. What’s not to love? Well, some stuff. You can get it at any good health food store in the cooking oil section, just be sure to spend the extra buck or two to get raw, organic, virgin coconut oil. Now, without further ado: Here are the 10 specific things I’ve tried it for, with honest assessments of how that worked for me:

Mark Jenkins // Street Installations - StumbleUpon Besançon Rome Rio de Janeiro Tudela Canada Mining Corruption: Survey Finds Canadian Provinces Seen As Riskier Than Parts Of Africa Corruption in Canada’s mining industry is worse than in some African and Latin American countries, says a new survey from the Fraser Institute. Alberta, British Columbia, Quebec, Nunavut and the Northwest Territories all ranked in the survey as more corrupt than Chile and Botswana. The remaining provinces and territories ranked better than any developing country, but were still seen as more corrupt than many U.S. and Australian jurisdictions. The study notes that Chile and Botswana have the fastest-growing resource sectors on their respective continents, suggesting a link between economic growth and lack of corruption. The Northwest Territories ranked as the most corrupt in Canada, with fully 16 per cent of respondents saying corruption would keep them from investing in the area.

The Sakawa Boys - Motherboard While Nigeria’s 401 scammers may have written the book on West African internet fraud, their shtick looks like Compuserve compared to what’s going on in Ghana. Unsatisfied with the meager winnings from emailing thousands of random Westerners in hopes of convincing one poor sap they’re the treasurer of the Ivory Coast, Ghana’s scammers decided to stack the odds in their favor the old-fashioned way—witchcraft. Taking a page from cyberpunk, traditional West African Juju priests adapted their services to the needs of the information age and started leading down-on-their-luck internet scammers through strange and costly rituals designed to increase their powers of persuasion and make their emails irresistible to greedy Americans.