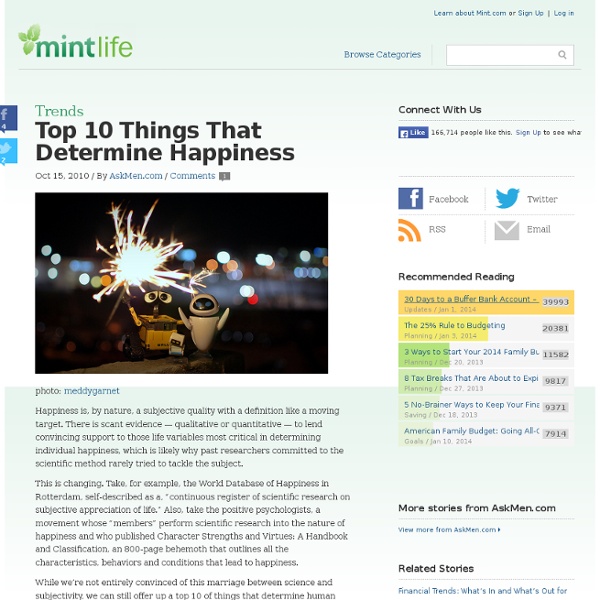 photo: meddygarnet Happiness is, by nature, a subjective quality with a definition like a moving target. There is scant evidence — qualitative or quantitative — to lend convincing support to those life variables most critical in determining individual happiness, which is likely why past researchers committed to the scientific method rarely tried to tackle the subject. This is changing. Take, for example, the World Database of Happiness in Rotterdam, self-described as a, “continuous register of scientific research on subjective appreciation of life.” Also, take the positive psychologists, a movement whose “members” perform scientific research into the nature of happiness and who published Character Strengths and Virtues: A Handbook and Classification, an 800-page behemoth that outlines all the characteristics, behaviors and conditions that lead to happiness. No.10 – Having a short memory Are you one to hold grudges? No.9 – Exacting fairness No.8 – Having lots of friendships No.2 – Good genes

Dunning–Kruger effect The Dunning–Kruger effect is a cognitive bias wherein relatively unskilled individuals suffer from illusory superiority, mistakenly assessing their ability to be much higher than is accurate. The bias was first experimentally observed by David Dunning and Justin Kruger of Cornell University in 1999. Dunning and Kruger attributed the bias to the metacognitive inability of the unskilled to evaluate their own ability level accurately. Their research also suggests that conversely, highly skilled individuals may underestimate their relative competence, erroneously assuming that tasks that are easy for them also are easy for others.[1] Dunning and Kruger have postulated that the effect is the result of internal illusion in the unskilled, and external misperception in the skilled: "The miscalibration of the incompetent stems from an error about the self, whereas the miscalibration of the highly competent stems from an error about others

Welcome to Adobe GoLive 6 From Los Angeles Times: It's not all about you Chances are, others aren't judging you as harshly as you think, if at all. By Benedict Carey Times Staff Writer January 13, 2003 The Top 10 Psychology Studies of 2010 The end of 2010 fast approaches, and I'm thrilled to have been asked by the editors of Psychology Today to write about the Top 10 psychology studies of the year. I've focused on studies that I personally feel stand out, not only as examples of great science, but even more importantly, as examples of how the science of psychology can improve our lives. Each study has a clear "take home" message, offering the reader an insight or a simple strategy they can use to reach their goals , strengthen their relationships, make better decisions, or become happier. If you extract the wisdom from these ten studies and apply them in your own life, 2011 just might be a very good year. 1) How to Break Bad Habits

Positive Psychology Questionnaires If you would like to recommend a questionnaire for this Web page, e-mail information in the format below to Peter Schulman. This page has information about the following questionnaires, some of which can be downloaded from this page. This list is not intended to be an endorsement of these questionnaires: Attributional Style Questionnaire (ASQ) Curiosity and Exploration Inventory (CEI-II) Gratitude Questionnaire - 6 (GQ-6) Internal Time: The Science of Chronotypes, Social Jet Lag, and Why You’re So Tired by Maria Popova Debunking the social stigma around late risers, or what Einstein has to do with teens’ risk for smoking. “Six hours’ sleep for a man, seven for a woman, and eight for a fool,” Napoleon famously prescribed. (He would have scoffed at Einstein, then, who was known to require ten hours of sleep for optimal performance.)

Peter Principle An illustration visualizing the Peter principle The Peter Principle is a concept in management theory in which the selection of a candidate for a position is based on the candidate's performance in his or her current role rather than on abilities relevant to the intended role. Thus, employees only stop being promoted once they can no longer perform effectively, and "managers rise to the level of their incompetence." The principle is named after Laurence J. 10 More Common Faults in Human Thought Humans This list is a follow up to Top 10 Common Faults in Human Thought. Thanks for everyone’s comments and feedback; you have inspired this second list! It is amazing that with all these biases, people are able to actually have a rational thought every now and then. 7 Lessons From 7 Great Minds Have you ever wished you could go back in time and have a conversation with one of the greatest minds in history? Well, you can’t sorry, they’re dead. Unless of course you’re clairaudient, be my guest. But for the rest of us, we can still refer to the words they left behind. Even though these great teachers have passed on, their words still live, and in them their wisdom. I’ve made a list of seven what I believe are some of the greatest teachings by the world’s greatest minds.