Everyday Mysteries: Fun Science Facts from the Library of Congress 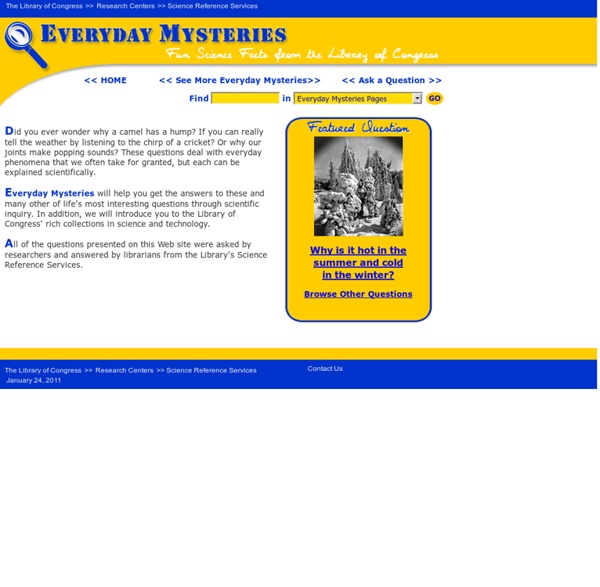 Did you ever wonder why a camel has a hump? If you can really tell the weather by listening to the chirp of a cricket? Or why our joints make popping sounds? These questions deal with everyday phenomena that we often take for granted, but each can be explained scientifically. Everyday Mysteries will help you get the answers to these and many other of life's most interesting questions through scientific inquiry. In addition, we will introduce you to the Library of Congress' rich collections in science and technology. All of the questions presented on this Web site were asked by researchers and answered by librarians from the Library's Science Reference Services.

iPads + Water Rockets = Fun Science & Math Lesson This morning I stopped by my friend Mike Morrell’s 9th grade science class. It was water rocket launch day so I knew it would be a fun day. Mike’s students have been working on rocket designs and building their rockets for a while. The water rockets are the first phase of the unit. Full model rockets with engines will be launched later this spring. To get rough measurements of the heights each water rocket reached Mike had students using a clinometer iPad app. Why Ask Why in the Classroom “Somewhere, something incredible is waiting to be known.” -Carl Sagan As an educator I always understood how important asking questions, especially why question was in the classroom. I believe asking questions empowers students to learn and encourages growth. In my classroom, it was an expectation as the students knew I was going to ask why.

Explore the Sky . Your Sky Tonight Our star chart is designed to get you out learning the night sky within a matter of moments. Just set it for your time and location, make a few tweaks if you like for personal taste, and print it out. For stargazing, pick a location that's as free as possible from bright local lights, and give yourself at least half an hour outdoors so that your vision becomes fully dark-adapted. (This can take 15 to 20 minutes for adults, somewhat less for children.) Through the Wires: Quiz Challenge As of July 1, 2013 ThinkQuest has been discontinued. We would like to thank everyone for being a part of the ThinkQuest global community: Students - For your limitless creativity and innovation, which inspires us all. Teachers - For your passion in guiding students on their quest.

40 Of The Best Science Podcasts For Mobile Learning In 2013, you don’t need to find a radio to listen in on quality broadcast programming. A laptop, MP3 player, tablet, or even a smartphone will work just as well. Even better, there is a wealth of content out there that’s both educational and entertaining, including some pretty amazing shows on scientific topics that are equally interesting to the layman and the professional. Whether you’re just getting into listening to science podcasts or are looking for a few new shows to add to your weekly collection, we’ve highlighted what we think are some of the best science podcasts out there right now. They’re informative, compelling, and even, at times, pretty darn funny, so make sure to check out one, two, or even all of these great science programs the next time you’re looking for a little edutainment. Radiolab:Listeners can enjoy five episodes a season of this hip, science-focused news show.

4 Strategies to Spark Curiosity British archaeologist Mary Leakey described her own learning as being "compelled by curiosity." Curiosity is the name we give to the state of having unanswered questions. And unanswered questions, by their nature, help us maintain a learning mindset. When we realize that we do not know all there is to know about something in which we are interested, we thirst.

When are Students Engaged? (Updated 11/2013) Educational author and former teacher, Dr. Michael Schmoker shares in his book, Results Now, a study that found of 1,500 classrooms visited, 85 percent of them had engaged less than 50 percent of the students. In other words, only 15 percent of the classrooms had more than half of the class at least paying attention to the lesson. Deep Below Antarctic Ice, Lake May Soon See Light hide captionWhile a team of Russian scientists were drilling ice core samples from their Vostok base in Antarctica, new satellite imagery revealed the outline of a lake the size of New Jersey buried two miles underneath the ice. Scientists have been drilling through the ice and are now just 100 feet away from breaking into the third largest lake on the planet. Earth Observatory/NASA Russian scientists are on the verge of punching a hole into a vast Antarctic lake that's buried under more than two miles of ice. If the Russians break through, they may tap into and disturb a primitive and pristine ecosystem that has been untouched for millions of years. Lake Vostok is actually the third largest lake in the world, measured by the amount of water it holds.

How do we know how far away the moon is? The exact distance between the Moon and Earth varies since the Moon follows an elliptical (oval) orbit, but on average the Moon is 384,399 km away. If you had a piece of string that long, you could wrap it all the way around the Earth’s equator almost ten times. Ancient Greek astronomers were able to make rough estimates of the distance to the Moon using information from eclipses to make geometric calculations. Since the 1960s, we have however had access to a much more accurate way of measuring this distance.