If It Were My Home 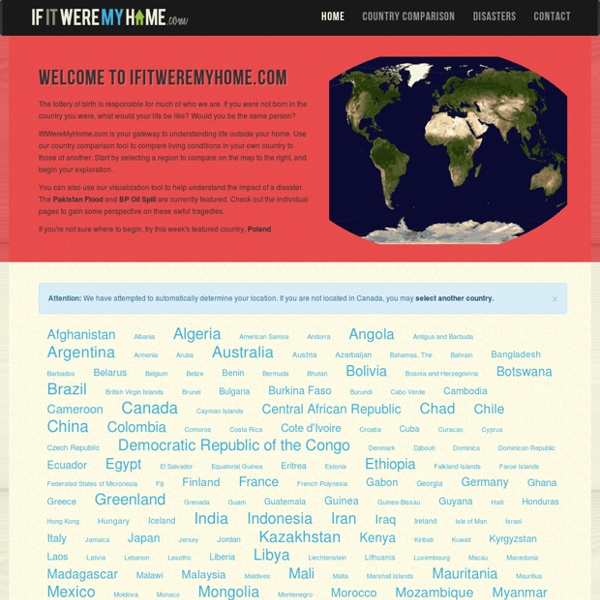 Canada A land of vast distances and rich natural resources, Canada became a self-governing dominion in 1867 while retaining ties to the British crown. Economically and technologically the nation has developed in parallel with the US, its neighbor to the south across an unfortified border. Canada faces the political challenges of meeting public demands for quality improvements in health care and education services, as well as responding to the particular concerns of predominantly francophone Quebec. Canada also aims to develop its diverse energy resources while maintaining its commitment to the environment. The land now occupied by Canada was first inhabited approximately 16,000 years ago by aboriginal peoples.

School's trade project will help Nepal Last updated 10:31, June 9 2015 Rose Cawley / Fairfax NZ The With One Loaf kids now want to sell their sleepout and put the money towards building houses in earthquake stricken Nepal. The World Factbook People from nearly every country share information with CIA, and new individuals contact us daily. If you have information you think might interest CIA due to our foreign intelligence collection mission, there are many ways to reach us. If you know of an imminent threat to a location inside the U.S., immediately contact your local law enforcement or FBI Field Office. For threats outside the U.S., contact CIA or go to a U.S. Embassy or Consulate and ask for the information to be passed to a U.S. official.

US Presidential Election Background 2016 presidential candidates Basic details of each candidate’s backgroundWhere the Candidates Stand on 2016’s Biggest IssuesWhat happens when … and how The important dates, Feb-Nov, listed and explained2016 Primary Results and Calendar Quickview of the results so far by NYTimes Warm-up What do kids want in a president? (1:20) Kids talk about what kind of person they think the next president should be like.

indy100.independent.co The official campaign period for the upcoming EU referendum begins on April 15th. But as all of us poor b-----ds already know, Brexit stats trying to persuade us to vote In or Out are already flying about all over the place. If you're already tired of the Brexit rhetoric, indy100 has taken a look back at our own data from stories about Europe to date. Whatever your opinion on the EU, these facts and figures are food for thought: 1.

About this Collection - Country Studies Contains the electronic versions of 80 books previously published in hard copy as part of the Country Studies Series by the Federal Research Division. Intended for a general audience, books in the series present a description and analysis of the historical setting and the social, economic, political, and national security systems and institutions of select countries throughout the world. Most books in the series deal with a single foreign country, but a few cover several countries or a geographic region. The series includes several books on countries that no longer exist in their original configuration—such as Czechoslovakia, East Germany, the Soviet Union, Sudan, and Yugoslavia. These books remain in the series because they continue to offer valuable historical information and perspective. In some cases, studies on successor states are also part of the series.

Chart: How Inside Out's 5 emotions work together to make more feelings Very, very mild spoilers for Inside Out follow. An important part of the climax of Pixar's wonderful new film Inside Out involves the realization that all of our emotions are important, that feeling sad can be just as crucial as feeling happy, no matter what others might tell you. But the movie also reveals that as we get older, our emotions begin to blend together into newer, more complicated feelings. Early in the film, Riley — the 11-year-old girl whose mind serves as Inside Out's primary setting — is largely defined by very primal feelings. ndla A Country of Contrasts The Republic of India is the second most populous country in the world. New Delhi is the capital, but Mumbai (formerly Bombay) is the largest city. India is a republic consisting of 28 states and seven union territories, with a parliamentary system of democracy. Economic reforms since 1991 have transformed it into one of the world's fastest growing economies. Nevertheless, a large portion of the population still suffers from high levels of poverty, illiteracy, and malnutrition. A Pluralistic, Multilingual and Multi-ethnic Society

Picture dictation Submitted 16 years 6 months ago by admin. This is a low preparation fun activity that works well with large classes, especially with young learners and teens. All your students need is a blank piece of paper and all the teacher needs is a little bit of imagination. Procedure Atlas for a Changing Planet Understanding natural and human systems is an essential first step toward reducing the severity of climate change and adapting to a warmer future. Maps and geographic information systems are the primary tools by which scientists, policymakers, planners, and activists visualize and understand our rapidly changing world. Spatial information informs decisions about how to build a better future.