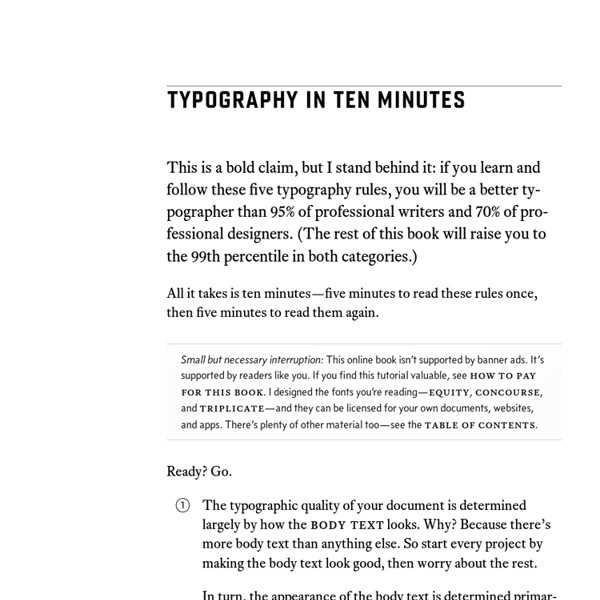 This is a bold claim, but I stand be­hind it: if you learn and fol­low these five ty­pog­ra­phy rules, you will be a bet­ter ty­pog­ra­pher than 95% of pro­fes­sional writ­ers and 70% of pro­fes­sional de­sign­ers. (The rest of this book will raise you to the 99th per­centile in both categories.) All it takes is ten min­utes—five min­utes to read these rules once, then five min­utes to read them again. Ready? The ty­po­graphic qual­ity of your doc­u­ment is de­ter­mined largely by how the body text looks. That’s it. Then, if you’re ready for a lit­tle more, try the sum­mary of key rules. If you’re ready for a lot more, start at the fore­word and keep reading.

The Elements of Graphic Design Review Over the past few weeks we’ve been taking an intensive look at the elements of design—the basic building blocks of graphic design and composition—through real world examples. It’s great to know the theory, but applying it is where all the knowledge comes together to form a successful design. I presented them in the order I originally did on Creative Curio in the first few posts here. When I initially chose the order, I did it from what I thought was the least complex to the most complex. We started off with line. Graphic design element number two was shape. The design element of space can be a simple concept to understand, but not very easy to master. Size and scale are lumped into the same category and it is difficult to talk about one without the other, but they are not the same thing. Texture is a fun element to experiment with and use to bring realism to your designs. Value, in my opinion, is the least considered element of design. What do you think is the most forgotten element?

How to become a designer without going to design school | Karen X. Cheng I got my job as a designer without going to design school. I had hacked together my own design education in 6 months while working a full-time job. I didn’t think I was ready but started applying for jobs anyway – and got a job at a great startup, Exec. To be clear, I’m nowhere near as good as those design prodigies that come out of a 4-year education at an elite school like RISD. But I’m definitely good enough to do my job well. I’m the only designer at Exec, so I do a pretty wide range of things – visual and interaction design, print, web, and mobile app design. Maybe you want to change careers and become a designer full-time. This is a guide to teach yourself design. Update: I first published this blog post over a year ago. Step 1. First, learn how to draw. You don’t have to sit in a room with a bunch of other artists trying to draw a naked woman.You don’t even have to get that good at drawing. Learn graphic design theory Start with the book Picture This. Learn how to write Step 2.

Traditional Artistic Skills - Gnomon Workshop - A Foundation in the Digital World | The Gnomon Workshop News Image Source: www.thegnomonworkshop.comImage Digitally painted by Jeremy Vickery As digital art production software becomes more and more a part of mainstream knowledge, through computers, smart tablets and smart phones, the more traditional art mediums get tossed to the wayside. Here is a map showing all the schools in the world k-12 that are incorporating tablets as of February of 2013, and a study performed by company Open Colleges shows that in the United States 91% of teachers have access to a computer in the classroom. Children at younger and younger ages are getting their hands on touch screens instead of finger paints, using styli instead of pens, pencils, or charcoal. Photoshop is now a piece of software widely known for being able to make ordinary people look like supermodels, and it does so in a frighteningly diverse range of professionalism. What does studying traditional mediums teach? Image Source: www.thegnomonworkshop.comRendering by Jeff Patton

Don't Leave College Without These 10 Digital Skills Graduation season is upon us, and that means college graduates everywhere are preparing to enter "the real world." But chances are your liberal arts degree, as hard-earned and valuable as it is, doesn't equip you with every digital skill you need. We've put together a short list of fundamental skills that every college graduate should possess, from simply branding yourself online to learning basic coding. They're guaranteed to increase your overall digital know-how, and you can learn them all on your own. Did you graduate college a long time ago, or never attended? 1. These days, most students are lucky enough to go to colleges that already have wireless Internet set up in the dorms. 2. With all those photos of your friends, your music library and a copy of your 40-page thesis, your entire world exists on the hardware of your computer, phone or tablet. 3. Even if you don't plan on using Photoshop regularly after graduation, it doesn't hurt to know the basics. 4. 5. 6. 7. 8. 9. 10.

Basic Color Theory Color theory encompasses a multitude of definitions, concepts and design applications - enough to fill several encyclopedias. However, there are three basic categories of color theory that are logical and useful : The color wheel, color harmony, and the context of how colors are used. Color theories create a logical structure for color. For example, if we have an assortment of fruits and vegetables, we can organize them by color and place them on a circle that shows the colors in relation to each other. The Color Wheel A color circle, based on red, yellow and blue, is traditional in the field of art. There are also definitions (or categories) of colors based on the color wheel. Primary Colors: Red, yellow and blueIn traditional color theory (used in paint and pigments), primary colors are the 3 pigment colors that cannot be mixed or formed by any combination of other colors. Secondary Colors: Green, orange and purpleThese are the colors formed by mixing the primary colors. Color Harmony 1.