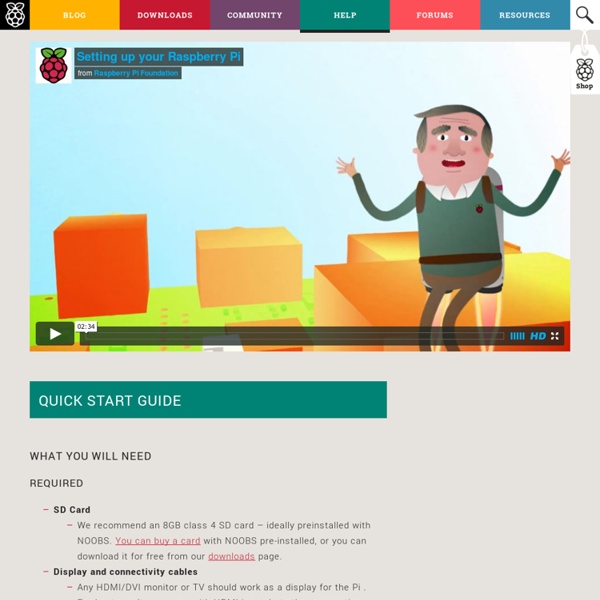 What you will need Required SD CardWe recommend an 8GB class 4 SD card – ideally preinstalled with NOOBS. You can buy a card with NOOBS pre-installed, or you can download it for free from our downloads page.Display and connectivity cablesAny HDMI/DVI monitor or TV should work as a display for the Pi . For best results, use one with HDMI input, but other connections are available for older devices. Use a standard Ethernet cable for internet access.Keyboard and mouseAny standard USB keyboard and mouse will work with your Raspberry Pi.Power supplyUse a 5V micro USB power supply to power your Raspberry Pi. Not essential but helpful to have Internet connectionTo update or download software, we recommend that you connect your Raspberry Pi to the internet either via and ethernet cable or a wifi adapter.HeadphonesHeadphones or earphones with a 3.5mm jack will work with your Raspberry Pi. Plugging in your Raspberry Pi Logging into your Raspberry Pi Read more in our documentation.

Raspberry Pi: Up and Running For those of you who haven’t yet played around with Raspberry Pi, this one’s for you. In this how-to video, I walk you through how to get a Raspberry Pi up and running. It’s the first in a series of Raspberry Pi videos that I’m making to accompany Getting Started with Raspberry Pi, a book I wrote with Shawn Wallace. The book covers Raspberry Pi and Linux basics and then works up to using Scratch, Python, GPIO (to control LED’s and switches), and web development on the board. If you’re intrigued by what you see but don’t yet have a Raspberry Pi, check out the Raspberry Pi Starter Kit in the Maker Shed.

Raspberry Pi Learning Resources This learning resource describes a practical exercise where the Raspberry Pi is used to demonstrate Dynamic Host Configuration Protocol on an isolated network. Introduction By now it will be clear that repeatedly changing the /etc/network/interfaces file is time-consuming and laborious. There are a number of disadvantages to giving static IP addresses to all computers on the network. FAQs Table of Contents: The Raspberry Pi is a credit-card-sized computer that plugs into your TV and a keyboard. It is a capable little computer which can be used in electronics projects, and for many of the things that your desktop PC does, like spreadsheets, word processing, browsing the internet, and playing games. It also plays high-definition video.

Ultimate Raspberry Pi Set-up Kit ModMyPi's Raspberry Pi Ultimate Kit has everything contained in the Supreme Kit with the addition of a USB Hub, Wifi Dongle, Bluetooth Dongle, Heatsink Kit and SD Card Reader! We've carefully compatibility tested all components, and only selected the very best manufacturer guaranteed, high quality parts available! You won't find a better kit at a better price, and all our kits are fully customisable from our huge range of Raspberry Pi accessories, cases and cable colours!

Scratch-ing the LEGO WeDo I have been Scratch-ing with LEGO WeDo kits, and my high school level students absolutely love it! The LEGO® Education WeDo™ robotics kit is normally ear-marked as an elementary school product, and Scratch was developed by MIT for young children to be able to program, but the combination of the two has tapped the interest of my elementary school daughter, my middle school son, and my Computer Science students at the high school level. Link: Scratch – old and new Mobile Raspberry Pi Computer: Build your own portable Pi-to-Go Aw, yes, the Raspberry Pi Computer, a credit card size mini PC that only cost $35. There are so many possibilities and uses for these small nano PCs. People have made them into PVRs (personal video recorders), retro gaming machines, weather stations, in-car PCs, jukeboxes, and so many more creative ideas. When I started this project four weeks ago, I just wanted to see if it was possible to make an ultra portable, mobile Raspberry Pi that you can take to-go. As I was building my Pi-to-Go I kept saying to myself, it would be cool if it had this, and then I would find a way to make it happen. My mobile Raspberry Pi Computer is now complete and because this is an open source project I wanted to show you everything, including how to build one yourself.

Why is my card-to-computer transfer so slow? - Photo.net Nikon Forum Robert Banks , May 26, 2013; 07:40 p.m. I've been testing some of my cards with various readers and have been quite disappointed with the results. The cards are both Lexar: XQD 1100x 64Gb and CF 1000x 64Gb. For transfer from the XQD I used a Lexar USB 3.0 reader and a Sony ExpressCard reader. For transfer from the CF I used a Lexar USB 3.0 Dual Slot reader and a Lexar Professional ExpressCard reader (updated a driver so it could read UDMA 7).