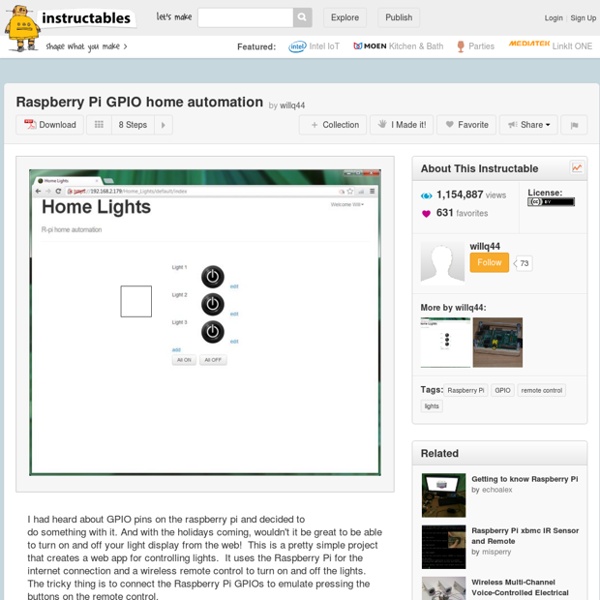 Tutorial: How to Set Up a Raspberry Pi Web Server People are doing a lot of cool things with the Raspberry Pi. One of the first things I thought to do was to see if I could make a Raspberry Pi web server. Being a web developer and overall geek I figured it might be kind of fun to do, and as I found out it’s really easy. Getting Started Setting up a Web Server on this device really isn’t much different from any other Linux machine, but there are a couple things you’ll want to do in order to get it working right. The first thing you want to do is get the Raspian Wheezy Image from here. The Raspberry Pi has a “memory_split” option that divides the memory between the CPU and GPU (Graphics). You may want to also enable the SSH server if that’s how you’re going to be accessing the device. Note: You can overclock this device, but I wouldn’t recommend it. After you’ve saved your settings reboot the device. Next we’re going to do a firmware upgrade, we need to install git: then download the firmware update and run it: Install Apache and PHP: Summary

How to make a Raspberry Pi Case | Design Modelling with Jude Pullen Step-by-Step Instructions Individual parts broken down into short 1-3min. videos. Some with time-lapse to keep it short – but still show the techniques. (As mentioned – still work in progress, so please send any suggestions to jude_pullen@yahoo.com ). The main objective here is to allow you to clearly follow the process – but – become comfortable enough with these techniques to make it your own. Screenshots A quick overview of the main parts of the tutorial. Sketches Work through a few ideas you might have in rough first. Rough-Mock-Ups Don’t worry about being too accurate – play around with different styles/materials. Basic Template You can also download my original layout here. 90 Degree Joint Technique If you are new to this ‘filleting’ method, using a ruler, click here. I’m Sticking With You… Yup, this part takes a while, but the result is pretty unusual, I think. Simple Window You can always make a simple viewing window, rather than Light Pipes. Professional Light Pipes Score & Snap Tricky

Raspberry Pi: Project 1 – Pandora Streamer « Engineering « Shaun Gehring Overview – What is it Using a Raspberry Pi you can create a pretty cool stand alone Pandora Streamer. Its a pretty easy project to put together and will only take an evening. Even though this project is basic from a Electrical Engineering standpoint you will learn the basics of GPIO, Python, BASH and basic Circuts. The best part is you can totally use this project on a daily basis. I do not just want to show you what i did but show you where i went wrong and how i got the correct answers so you will feel confident trying this stuff yourself. I originally found this project on Instructables ( What you will need Optional WIFI adapter Lets get started Step 1 – Get the Raspberry Pi Prepped A. B. In LXTerminal: sudo nano /boot/cmdline.txt And change: dwc_otg.lpm_enable=0 console=ttyAMA0,115200 kgdboc=ttyAMA0,115200 console=tty1 $ to: dwc_otg.lpm_enable=0 console=tty1 $ Next: sudo nano /etc/inittab Reboot the Pi C. D. A. B. A.

Coffee Table Pi The LCD screen I went with a 24inch LCD screen with LED backlight. Select any size screen you wish. Make sure it has good viewing angles as the screen will be mounted upwards and almost always viewed at an angle. Select one that can be wall mounted as it can then be attached to the table from underneath. Select one that turns on without needing any buttons to be pressed as all the buttons with be hidden inside the table. The Joystick and Button This is up to you, I went with a Happ 4 or 8 way arcade ball top joystick, 2 blue American style buttons, 1 player and 2 player buttons. Perspex sheet 4mm Cut to the size of the outside edge of the LCD screen, larger than the viewing size of the screen as it will be screwed onto the underside of the top of the table. Wood, glue, screws, stain and finish This is all up to what you want to do. Sound I recycled a nice 5inch speaker for the sound and used the circuit from an old set of computer speakers.

Researchers Build Supercomputer from Legos and Raspberry Pi © University of SouthamptonIn a twist on the usual use for the tiny Raspberry Pi computers, a team of computation engineers have built a supercomputer by linking together 64 of the devices and then housing it in a rack made from those little plastic blocks we all know and love. The team at the University of Southampton, led by Professor Simon Cox, built the system for under £2,500 (~$4000), and see it as "as a starting point to inspire and enable students to apply high-performance computing and data handling to tackle complex engineering and scientific challenges". "As soon as we were able to source sufficient Raspberry Pi computers we wanted to see if it was possible to link them together into a supercomputer. We installed and built all of the necessary software on the Pi starting from a standard Debian Wheezy system image and we have published a guide so you can build your own supercomputer." - Cox

Lab Notes: Zack’s Wearable RasPi I’m Zack Freedman, part man, part Raspberry Pi! I’m writing this blog post from a wearable cyborg Raspberry Pi, or as I like to call it, Pi in the Face. When Rob Bishop of the Raspberry Pi Foundation visited the space yesterday, he challenged the attendees to build a project using the tiny open-source computer. I decided, why not take advantage of its small size to make myself a cyborg? Wearable technology is my main area of hacking, so I had some parts lying around. The wearable display uses the innards of a pair of MyVu Crystal video glasses – these are tricky to disassemble, so check this tutorial. The brains of the operation are, of course, a RasPi. No one brought a wi-fi dongle, so no wireless intertubes. I built this with parts lying around, but a similar setup would cost just over $100. If you’re interested in wearables, cyborg tech, and augmented reality, I write about the subjects weekly on my blog.