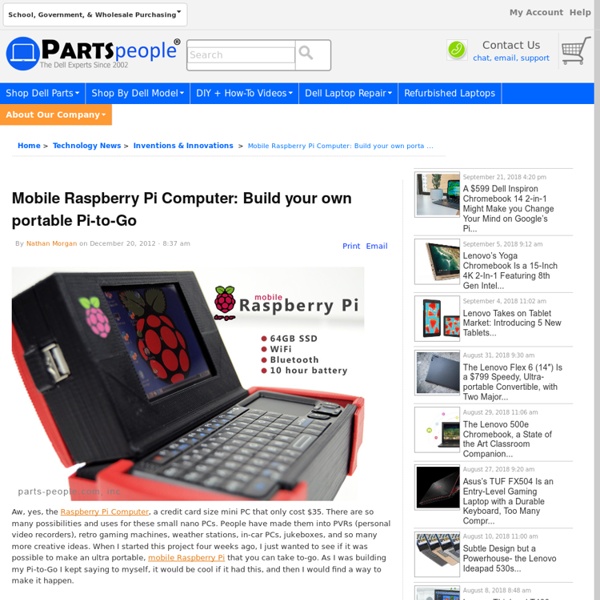 Aw, yes, the Raspberry Pi Computer, a credit card size mini PC that only cost $35. There are so many possibilities and uses for these small nano PCs. People have made them into PVRs (personal video recorders), retro gaming machines, weather stations, in-car PCs, jukeboxes, and so many more creative ideas. When I started this project four weeks ago, I just wanted to see if it was possible to make an ultra portable, mobile Raspberry Pi that you can take to-go. My mobile Raspberry Pi Computer is now complete and because this is an open source project I wanted to show you everything, including how to build one yourself. Just a quick blurb about myself. LCD Screen The LCD I used is from an after market backup camera system that can be installed in a car. Battery Pack First off, be very careful when messing with lithium-ion batteries. Charging the battery was easy, I just purchased an after market laptop battery charger. Internal Powered Hub Extended Storage 64GB SSD, yes I did! Operating System

Lab Notes: Zack’s Wearable RasPi I’m Zack Freedman, part man, part Raspberry Pi! I’m writing this blog post from a wearable cyborg Raspberry Pi, or as I like to call it, Pi in the Face. When Rob Bishop of the Raspberry Pi Foundation visited the space yesterday, he challenged the attendees to build a project using the tiny open-source computer. I decided, why not take advantage of its small size to make myself a cyborg? Wearable technology is my main area of hacking, so I had some parts lying around. The brains of the operation are, of course, a RasPi. No one brought a wi-fi dongle, so no wireless intertubes. I built this with parts lying around, but a similar setup would cost just over $100. If you’re interested in wearables, cyborg tech, and augmented reality, I write about the subjects weekly on my blog.

Batteries.. for the last time *Rechargeable AA batteries can provide 1.5V each when fully charged, may drain to 1.2V. Also can give an amperage of 400-1200 MA (less the better - heating) Wrong - rechargeable batteries in AA form of NiCd or NiMH type only provide 1.2v when fully changed - ... de_battery *You can use a UBEC converter to keep the amperage the same while converting a high voltage input to exactly 5V (only 5V UBEC's, d'oh) A buck converted would be a wise choice when powering the Pi with batteries since the voltage output must remain constant as possible while they discharge.There are step-up and step down buck converters however since your LCD requires 12v then I would recommend a step-down buck converter for the Pi. I have a clear idea of how can I connect batteries. Ideally I would have the LCD and Pi running off separate power sources but since you're strappedfor space I guess you don't have much choice. Richard S.

How to make a Raspberry Pi Case | Design Modelling with Jude Pullen Step-by-Step Instructions Individual parts broken down into short 1-3min. videos. Some with time-lapse to keep it short – but still show the techniques. Screenshots A quick overview of the main parts of the tutorial. Sketches Work through a few ideas you might have in rough first. Rough-Mock-Ups Don’t worry about being too accurate – play around with different styles/materials. Basic Template You can also download my original layout here. 90 Degree Joint Technique If you are new to this ‘filleting’ method, using a ruler, click here. I’m Sticking With You… Yup, this part takes a while, but the result is pretty unusual, I think. Simple Window You can always make a simple viewing window, rather than Light Pipes. Professional Light Pipes For the modelling connoisseur. Score & Snap Easier than you think – and saves a lot of time once you get the hang of it. Super Glue (Tip) Super Glue does not stick to Insulation Tape – really handy to know for modelling. Light Pipe Test Check Before Gluing General Assembly

Episode 340 - TinkernutWiki "Make A Raspberry Pi Arcade Cabinet" is the 340th series episode of Tinkernut and the 3rd episode of the 2013 season. Episode Summary The $35 Raspberry Pi has proven to be a hit amongst hardware hackers and DIYers. It's very small, easy to set up, and very versatile. Parts List The prices really depend on what you would like to purchase. Raspberry Pi Arcade Raspberry Pi Setup Installing the Operating System There are several different options when it comes to emulators on the Raspberry Pi, but in order to make the Pi function as an Arcade, one stands out amongst the rest. Win32DiskImager Windows To install PiMame on an SD card in Windows, you need to download an image burner such as Win32 Disk Imager. Mac For Mac computers you do not need any extra software. df -h Record all of the "disk" entries that are listed (ex. disks1). sudo dd bs=1m if=~/PATH TO PIMAME/pimame-0.5.img of=/dev/DISK# sudo diskutil eject /dev/DISK# This will eject your SD card. First Run Gridlee game splash screen startx ifconfig

Tutorial: How to Set Up a Raspberry Pi Web Server People are doing a lot of cool things with the Raspberry Pi. One of the first things I thought to do was to see if I could make a Raspberry Pi web server. Being a web developer and overall geek I figured it might be kind of fun to do, and as I found out it’s really easy. Getting Started Setting up a Web Server on this device really isn’t much different from any other Linux machine, but there are a couple things you’ll want to do in order to get it working right. The first thing you want to do is get the Raspian Wheezy Image from here. The Raspberry Pi has a “memory_split” option that divides the memory between the CPU and GPU (Graphics). You may want to also enable the SSH server if that’s how you’re going to be accessing the device. Note: You can overclock this device, but I wouldn’t recommend it. After you’ve saved your settings reboot the device. Next we’re going to do a firmware upgrade, we need to install git: then download the firmware update and run it: Install Apache and PHP: Summary

The Raspberry Pi Guy On the 29th of February 2012 a credit card sized computer was released to the public... Not only did it kickstart my interests in programming, electronics and all things geeky but it also kindled the same passion in millions of others: affecting people of all different ages and abilities around the globe. What was this miraculous device? The Raspberry Pi. An affordable computer that anyone can buy and learn computing with. The Raspberry Pi will turn two years old in the upcoming months - that is two whole years of inspiration, projects and learning. All of the videos clips and images in this video are either my own or those that I found on YouTube and through Google images - it is all in the public eye already and I am dreadfully sorry if I have missed out something that you would have liked to have seen. I hope that you enjoy this video and join in with me in order to celebrate all things Pi! Here's to all of the years to come! MattThe Raspberry Pi Guy Sponsored by The Pi Hut!

Raspberry Pi: Project 1 – Pandora Streamer « Engineering « Shaun Gehring Overview – What is it Using a Raspberry Pi you can create a pretty cool stand alone Pandora Streamer. Its a pretty easy project to put together and will only take an evening. I do not just want to show you what i did but show you where i went wrong and how i got the correct answers so you will feel confident trying this stuff yourself. I originally found this project on Instructables ( What you will need Optional WIFI adapter Lets get started Step 1 – Get the Raspberry Pi Prepped A. B. In LXTerminal: sudo nano /boot/cmdline.txt And change: dwc_otg.lpm_enable=0 console=ttyAMA0,115200 kgdboc=ttyAMA0,115200 console=tty1 $ to: dwc_otg.lpm_enable=0 console=tty1 $ Next: sudo nano /etc/inittab #Spawn a getty on Raspberry Pi serial lineT0:23:respawn:/sbin/getty -L ttyAMA0 115200 vt100 #Spawn a getty on Raspberry Pi serial line#T0:23:respawn:/sbin/getty -L ttyAMA0 115200 vt100 Reboot the Pi C. sudo apt-get install python-serial D.

Raspberry PiPod | Experiences with the Raspberry Pi micro computer Xian has done a great job on this LEGO rover. It utilises Lego Power Functions and the Raspberry Pi and can be controlled via a web browser. He explains his build, with block diagrams and details on wiring and explains his use of the Navio board for controlling things. The guys at Canadian company Roboteurs are currently running a Kickstarter campaign to fund their new stepper motor driver board – the SlushEngine. Controls up to 4 bi-polar stepper motorsMax 7A / motor9-35 V DC operating range1-128 microstepping capabilitiesIntegrated motion engine in stepper driver4 limit switch inputs4 general purpose industrial inputs4 general purpose industrial outputs (3A / 24V)8 additional logic level I/OThermistor temperature sensingUEXT expansion connectorRaspberry Pi fused power source The board is currently available to Earlybirds at $190 (Canadian Dollars) plus delivery, which works out at approximately £125 delivered. Take a look at the Kickstarter here if you’d like to find out more.

Coffee Table Pi The LCD screen I went with a 24inch LCD screen with LED backlight. Select any size screen you wish. Make sure it has good viewing angles as the screen will be mounted upwards and almost always viewed at an angle. Test out the screen viewed from above and below, from the left and right and make sure it still looks almost as good as when viewed straight on. Select one that can be wall mounted as it can then be attached to the table from underneath. Select one that turns on without needing any buttons to be pressed as all the buttons with be hidden inside the table. The Joystick and Button This is up to you, I went with a Happ 4 or 8 way arcade ball top joystick, 2 blue American style buttons, 1 player and 2 player buttons. Perspex sheet 4mm Cut to the size of the outside edge of the LCD screen, larger than the viewing size of the screen as it will be screwed onto the underside of the top of the table. Wood, glue, screws, stain and finish This is all up to what you want to do.

Researchers Build Supercomputer from Legos and Raspberry Pi © University of SouthamptonIn a twist on the usual use for the tiny Raspberry Pi computers, a team of computation engineers have built a supercomputer by linking together 64 of the devices and then housing it in a rack made from those little plastic blocks we all know and love. The team at the University of Southampton, led by Professor Simon Cox, built the system for under £2,500 (~$4000), and see it as "as a starting point to inspire and enable students to apply high-performance computing and data handling to tackle complex engineering and scientific challenges". "As soon as we were able to source sufficient Raspberry Pi computers we wanted to see if it was possible to link them together into a supercomputer. In homage to the University's supercomputer (named Iridis), the new system is called Iridis-Pi, and features 64 processors and 1Tb of memory (using 16Gb SD cards for each Raspberry Pi).