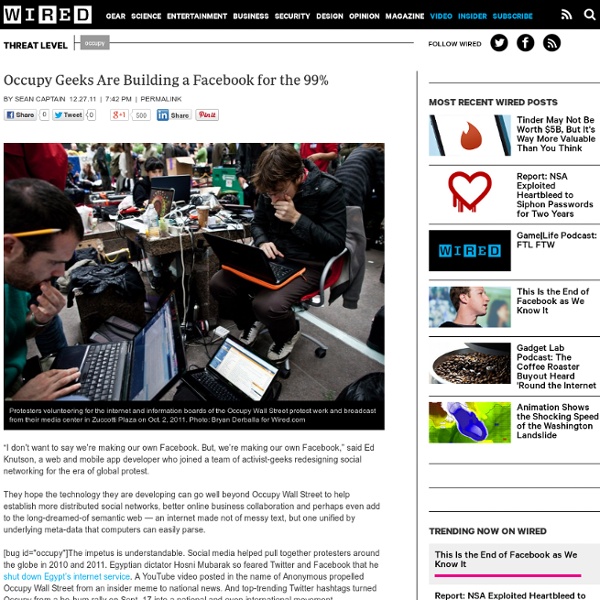 Protesters volunteering for the internet and information boards of the Occupy Wall Street protest work and broadcast from their media center in Zuccotti Plaza on Oct. 2, 2011. Photo: Bryan Derballa for Wired.com “I don’t want to say we’re making our own Facebook. They hope the technology they are developing can go well beyond Occupy Wall Street to help establish more distributed social networks, better online business collaboration and perhaps even add to the long-dreamed-of semantic web — an internet made not of messy text, but one unified by underlying meta-data that computers can easily parse. [bug id="occupy"]The impetus is understandable. Now it’s time for activists to move beyond other people’s social networks and build their own, according to Knutson. Related:  Digital Environments

How mobile phones are saving lives in Ghana Mobile phone penetration in Africa has grown tremendously in the last decade. Between 1998 and 2010, the continent witnessed an increase from 0.53 per 100 people to 42.82 per 100 people. This increase in penetration has translated to improved economic growth for Africa. The mobile ecosystem contributed $75 billion to Africa’s GDP in 2013 and it is expected to grow to $104 billion by 2020. Most deaths in Africa occur due to lack of accessible care. When a 27-year-old pregnant mother of three, Faith Kuwornu was infected with cholera in 2014, she consulted health officials in Ghana through her mobile phone. Eric Topol, a professor of genomics at the Scripps Research Institute was quoted in a report from The Economist Intelligence Unit, to have said: “Wherever there is a mobile signal, there is the capability for delivering better healthcare”. “Aside from cholera and other diarrhoeal diseases, malaria cases increase any time it floods,” says Dr.

Reflections on a Revolution The Archdruid Report The 10 biggest tech stories of 2011 The world of entertainment mourned and remembered Steve Jobs with social media mentions. In 2011, perhaps no news story was bigger than the death of Steve JobsSocial media was used heavily to organize protest around the worldMysterious hacker groups rose to prominence in 2011 (CNN) -- The technology industry often finds itself pontificating about the future, but the busy news cycle this year gave us plenty to discuss. Very influential tech pioneers died; cyber-security cost companies billions of dollars; and trends in electronics and on the Web provided new tools and created new challenges. Smartphones and tablets each grew so immensely this year that we decided to give them their own mobile year-in-review list. As for future talk, there were plenty of bold, futuristic initiatives that did not quite bear fruit this year. These 10 stories in 2011 had a huge impact that could resonate for many years: 1. 2. In London, participants in riots used BlackBerry Messenger. 3. 4. 5. 6. 7. 8. 9.

Fake migrant Instagram account to promote Spanish film festival Did you think this was real? Source: Instagram IT’S the supreme goal of countless marketing campaigns — to go viral. The case of Abdou Diouf is the latest example of a campaign to use the power of social media to attract huge volumes of attention, regardless of the veracity of the content. The campaign involved an Instagram account which purported to belong to Diouf, a Senegalese asylum seeker embarking on the perilous journey from northern Africa to Europe. The account posted a string of photos at various stages of the journey, showing Diouf making his dash for a better life. Caption: Two days walking. Caption: Somewhere in the desert before Morocco. It was picked up by the Huffington Post over the weekend, and the Instagram account quickly went viral as people shared the amazing voyage. Among those who shared it was BBC journalist Jacques Peretti who tweeted the story saying: “This isn’t a picture of a muffin, this is real life.” Caption: Running to the future.

Federated General Assembly - Aperçu - OWS Project Tracker The Federated General Assembly (FGA) is an open source, distributed social platform designed to support the Occupy movement by allowing people and groups to collaborate, share their activities and ideas, with an overall emphasis on meaning, value, and trust. See the Introduction for a high-level overview of the project goals, and Getting Started for info on getting involved. Subprojects: FGA - Events & Meetings, FGA Devops, #OWSdirectory, FGA Project site Members Occupy Wall Street rediscovers the radical imagination | David Graeber People protest during the 'Occupy Wall Street' rally in New York, 17 September. Photograph: Steven Greaves/Demotix/Corbis Why are people occupying Wall Street? There are obvious reasons. Is it really surprising they would like to have a word with the financial magnates who stole their future? Just as in Europe, we are seeing the results of colossal social failure. But the ultimate failure here is of imagination. Everything we'd been told for the last decade turned out to be a lie. It seemed the time had come to rethink everything: the very nature of markets, money, debt; to ask what an "economy" is actually for. Perhaps, it's not surprising. What we've learned now is that the economic crisis of the 1970s never really went away. When the history is finally written, though, it's likely all of this tumult – beginning with the Arab Spring – will be remembered as the opening salvo in a wave of negotiations over the dissolution of the American Empire.

After 2012, Microsoft Is Done With CES Keynotes Microsoft is ending its years-long run as the Consumer Electronics Show keynote kick-off event. Its 2012 keynote, which should highlight Windows 8 will be its last and next year will also mark the software giant's last trade show booth at the event. Microsoft made the surprise announcement Wednesday in a brief blog post by Corporate Vice President for Corporate Communications Frank X. Shaw: "We have decided that this coming January will be our last keynote presentation and booth at CES. After participating in the event for almost 20 years, Microsoft will still have some sort of presence at the show. While these keynotes are among some of the most highly anticipated events of CES, they haven't really been the same since Microsoft Founder, Chairman and former CEO Bill Gates retired from the company to focus on his philanthropic activities. Mashable contacted the Consumer Electronics Associations (the group that runs CES) for comment and received this statement: