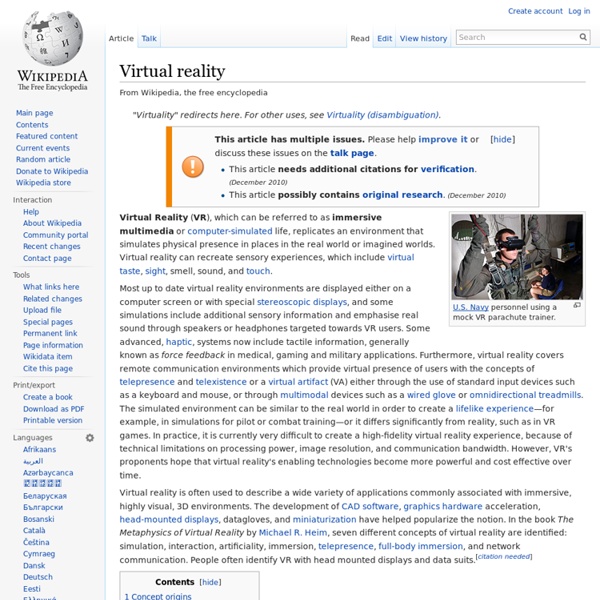 U.S. Navy personnel using a mock VR parachute trainer. Virtual Reality (VR), which can be referred to as immersive multimedia or computer-simulated life, replicates an environment that simulates physical presence in places in the real world or imagined worlds. Virtual reality can recreate sensory experiences, which include virtual taste, sight, smell, sound, and touch. Most up to date virtual reality environments are displayed either on a computer screen or with special stereoscopic displays, and some simulations include additional sensory information and emphasise real sound through speakers or headphones targeted towards VR users. Some advanced, haptic, systems now include tactile information, generally known as force feedback in medical, gaming and military applications. Concept origins[edit] Multimedia: from Wagner to Virtual Reality, edited by Randall Packer and Ken Jordan and first published in 2001, explores the term and its history from an avant-garde perspective. History[edit]

Immersion (virtual reality) The name is a metaphoric use of the experience of submersion applied to representation, fiction or simulation. Immersion can also be defined as the state of consciousness where a "visitor" (Maurice Benayoun) or "immersant" (Char Davies)’s awareness of physical self is transformed by being surrounded in an artificial environment; used for describing partial or complete suspension of disbelief, enabling action or reaction to stimulations encountered in a virtual or artistic environment. The degree to which the virtual or artistic environment faithfully reproduces reality determines the degree of suspension of disbelief. Head-mounted display A head-mounted display (or helmet-mounted display, for aviation applications), both abbreviated HMD, is a display device, worn on the head or as part of a helmet, that has a small display optic in front of one (monocular HMD) or each eye (binocular HMD). There is also an optical head-mounted display (OHMD), which is a wearable display that has the capability of reflecting projected images as well as allowing the user to see through it. A binocular head-mounted display (HMD). A professional head-mounted display (HMD). Overview[edit] A typical HMD has either one or two small displays with lenses and semi-transparent mirrors embedded in a helmet, eyeglasses (also known as data glasses) or visor.

DIY Virtual Reality headset is bizarre genius [Video] I think it's fair to say that if you make one of these DIY virtual reality headsets, your kids will definitely be the coolest in the playground. The handiwork of Recombu's Andrew Lim, the cardboard headset takes advantage of an accelerometer-packing HTC Magic, an old pair of lab goggles and some boyish enthusiasm to create a head-tracking view of the world. Video demo after the cut You can use the headset to pan around in the compass Street View mode of Google Maps, or get more interesting and use one of the augmented reality apps available for Android - such as Layar - to overlay information over a real-time view of what the Magic's camera is seeing. You'll certainly be distinctive as you walk down the street. Of course, the main problem you'll have is controlling the Magic, what with it being sellotaped into the box, but some sort of snug-fitting case into which the Android smartphone could slide would address that.

Computer-mediated reality Art installation illustrating the mediated reality concept. First we display what's really there, and then this allows a computer to be inserted into the "reality stream" to modify it. Mediated Reality application running on Apple iPhone Augmented reality NASA X38 display showing video map overlays including runways and obstacles during flight test in 2000. Augmented reality (AR) is a live direct or indirect view of a physical, real-world environment whose elements are augmented (or supplemented) by computer-generated sensory input such as sound, video, graphics or GPS data. It is related to a more general concept called mediated reality, in which a view of reality is modified (possibly even diminished rather than augmented) by a computer. As a result, the technology functions by enhancing one’s current perception of reality.[1] By contrast, virtual reality replaces the real world with a simulated one.[2][3] Augmentation is conventionally in real-time and in semantic context with environmental elements, such as sports scores on TV during a match. Technology[edit]

Google Glass Optical head-mounted computer glasses Google started selling a prototype of Google Glass to qualified "Glass Explorers" in the US on April 15, 2013, for a limited period for $1,500, before it became available to the public on May 15, 2014.[13] It had an integral 5 megapixel still/720p video camera. The headset received a great deal of criticism amid concerns that its use could violate existing privacy laws.[14]

Tantric Star AR The only deck of its kind available on the worldwide web and now available for your mobile device! This free version is a taste of what the full version can give. If you like the free version, please purchase the full version. SightSpace 3D cadTouch is a PRO CAD solution that completely reinvents on-site drawing, giving to professionals in various core fields like architecture, engineering, real estate, home design, and more, the power to measure, draw and view their work on-site. This is the full version of cadTouch 5, a professional CAD 2D editor and 2D/3D viewer at your fingertips. cadTouch is really easy to use and it's fast multitouch interface will give you the precision and flexibility that pen and paper fail to archive, finally you will have the perfect on-the-go companion for desktop software like AutoCAD™, SketchUp™ or Solidworks™ and every other DWG/DXF compatible app. THIS WEEK ONLY: Get cadTouch 50% off it's US$20 price, hurry up! cadTouch requires no internet connection and no subscription.