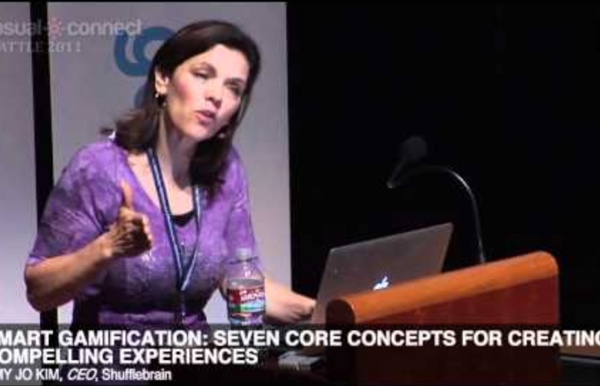 Un prof bâtit un monde virtuel pour attirer des lycéens vers les sciences | Les mondes virtuels en pédagogie The Code of Gamification Ethics For the last two years, I’ve been quietly talking about a gamification code of ethics. The discussion tends to come up most often at dinner parties and during GSummit, but it’s also been a hot topic during debates about gamification’s role in the future. I firmly believe that part of the reason we get so much snark online for Gamification is not because it’s a passing fad, but rather because it’s a powerful force for change that threatens the existing order. While we could dodge the question of gamification’s potential to cause harm to society, I don’t think we should. That’s why I want to start a dialogue with the whole community about a code of ethics for our industry — and we need your involvement. Why Do This? How Do We Do This The newly created Engagement Alliance has three core objectives: Education, Advocacy and Research. Here’s the working statement: Join us at GSummit 2014 in San Francisco this June 10-13 to learn how your company can "Recapture User Engagement."

Home | Foldit You’d Be Surprised By What Really Motivates Users Editor’s note: This article is adapted from Hooked: A Guide to Building Habit-Forming Products, a new book by Nir Eyal and Ryan Hoover. Earlier this month, Twitter co-founder Biz Stone unveiled his mysterious startup Jelly. The question-and-answer app was met with a mix of criticism and head scratching. In an interview, Biz articulated his goal to, “make the world a more empathetic place.” We hope a few insights gleaned from user psychology may help the Jelly makers improve their jam and provide some tips for anyone building an online community. Lesson 1 – The Right Reward In May 2007, entrepreneur and Internet celebrity Jason Calacanis launched a site called Mahalo. People who submitted a question would offer a bounty in the form of a virtual currency known as “Mahalo Dollars.” At first, Mahalo garnered significant attention and traffic. Calacanis blamed Google’s algorithm update for having a major negative impact but said Mahalo was, “growing very slowly” even before the change.

Mondes ActiveWorlds, quelques caractéristiques Thinking, Fast and Slow Thinking, Fast and Slow is a best-selling[1] 2011 book by Nobel Memorial Prize in Economics winner Daniel Kahneman which summarizes research that he conducted over decades, often in collaboration with Amos Tversky.[2][3] It covers all three phases of his career: his early days working on cognitive biases, his work on prospect theory, and his later work on happiness. The book's central thesis is a dichotomy between two modes of thought: "System 1" is fast, instinctive and emotional; "System 2" is slower, more deliberative, and more logical. The book delineates cognitive biases associated with each type of thinking, starting with Kahneman's own research on loss aversion. From framing choices to substitution, the book highlights several decades of academic research to suggest that people place too much confidence in human judgment. Prospect theory[edit] One example is that people are loss-averse: they are more likely to act to avert a loss than to achieve a gain. Two systems[edit]

Presentations Introduction Gamification has many ever-changing components to it, from psychology to design and implementation. Here are a few external resources we have vetted and compiled to help supplement your knowledge on the subject. Gamification Studies A collection of scientific papers and studies on gamification and related fields. A RECIPE for Meaningful Gamification This article introduces six concepts - Reflection, Exposition, Choice, Information, Play, and Engagement - to guide designers of gamification systems that rely on non-reward-based game elements to help people find personal connections and meaning in a real world context. A Review of Gamification for Health-Related Contexts The paper's focus is to introduce theoretical aspects of gamification and its potential impact on health-related contexts, as well as present the state-of-the-art on how gamification is being employed in such contexts.

ActiveWorlds : 3D Virtual Worlds, build your own virtual 3d avatar world in minutes. Kill it With Fire: why Gamification sucks and Game Dynamics rule This is a transcript (sort of)of an Ignite session I just delivered at the Melcrum Digital Communications Summit in London. I don’t like Gamification. It’s been a buzzword for years and too many people seem to be missing the point. Corporate suited types see the engagement people show video games and think “Oh, I’ll have some of that!” (disclosure: I am currently a corporate suited type). This leads people to do silly things such as add badges and a points system to their boring web site. All the cherry flavour in the world isn’t enough to mask that medicine. People are smart. Instead, we need to focus on creating intrinsically rewarding experiences. So what makes games intrinsically rewarding? Want to make people run? These dynamics are all based on basic principles. Life is ambiguous. Which brings us to the second main principle. People love dogs for a lot of reasons, but one of them is emotional transparency. Are you doing well? Allows them to expand at their own pace. Like this:

How Deloitte Made Learning a Game - Jeanne C. Meister by Jeanne C. Meister | 8:00 AM January 2, 2013 “Training is a funny thing,” James Sanders, Manager of Innovation at Deloitte Consulting, told me recently. “No matter how easy you make it to access, or how brilliant the learning programs are, training is simply not the first thing people think of doing when they have some free time. Let’s face it, for most people, on a typical Sunday morning, if given the choice between ‘Am I gonna watch ESPN, or am I gonna do some training?’ training will not win out.” And yet, by using gamification principles, Deloitte has seen use of its Deloitte Leadership Academy (DLA) training program increase. Gamification takes the essence of games — attributes such as fun, play, transparency, design and competition — and applies these to a range of real-world processes inside an organization, including learning & development. Deloitte is well on its way to staying ahead of the trend. DLA’s design of its leaderboard is also instructive. Who is your audience?

eLearning: How to Incorporate Gamification Elements by AJ George If you happened to catch my earlier article on the gamification of learning, then you know that I have been dubious about its effectiveness. To be clear, it's not the premise of having fun in learning that I feel we should be wary of. Stories, Yes. We've all heard that it is no longer cool to give a presentation of nothing but bullet points. At a minimum, create a work-like scenario. An even more compelling story will have actual characters and a string of events. It's the bottom of the 8th in the high-school baseball game. Elaborate as much or as little as you need to create interest and get the point across. Challenge Learners and Promote Creativity That same story-telling approach can be used to spiff up quizzes. You are in the midst of a zombie apocalypse. Provide Continual On-The-Spot Feedback One of the best things about games, particularly of the video variety, is that you don't have to wait to find out how you did.