More Fun With Cultural Appropriation! This Time With Ankara Prints. So I was at a big box store over the weekend, hoping to pick up a few jeans on clearance, when something caught my eye. 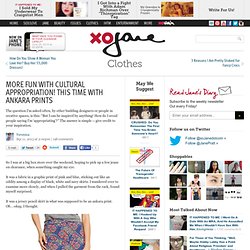 It was a fabric in a graphic print of pink and blue, sticking out like an oddity among a display of black, white and navy skirts. I wandered over to examine more closely, and when I pulled the garment from the rack, found myself surprised. It was a jersey pencil skirt in what was supposed to be an ankara print. Oh… okay, I thought. White People, Dreadlocks, and Cultural Appropriation. Dear White Gay Men, We’re Not Done Here: Thoughts on Cultural Appropriation : blackladies. Iggy Azalea’s post-racial mess: America’s oldest race tale, remixed. Recently, my nine year-old nephew came running into the room, eager to find a seat to watch a performance by Iggy Azalea on an awards show. 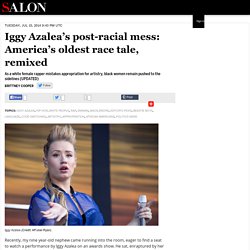 He sat, enraptured by her performance, yelling, “Iggy!” Utterly oblivious to the look of chagrin and dismay on my face, as I, too, tuned in to watch this white girl from Australia, turned ATL-style rapper, caricature everything I love about Southern Hip Hop. The look and feeling of chagrin has stayed with me each time I turn on my radio and hear Iggy’s hit song, “Fancy” coming through my speakers. And some of the dismay I feel is at myself, because almost without fail, I immediately start bobbing my head to the beat. Iggy is a protégé of T.I., one of my all-time favorite rappers. The question is why? 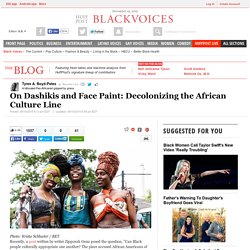 The piece accused African Americans of committing cultural appropriation in the same way white people do. Needless to say, her piece has caused quite the stir on my Facebook timeline. Though well intentioned, she missed the mark tremendously. By asserting that Black people are guilty of the same appropriation that whites are, the author failed to factor in the forced dislocation of an entire population of African people and dismissed their attempts at reconfiguring any semblance of African identity, which brings me to my thesis:When native African people restrict the cultural involvement of others based on their Diasporic location, they implicitly perpetuate the same colonialism that separated Africans from Africa.

The reason this piece garnered so much support is simple -- colonialism. (Photo: Erica Jones/ LolaWho.com) Dreadlocks tangled in cultural appropriation controversy - The DePaulia. They’re anything but dreadful. 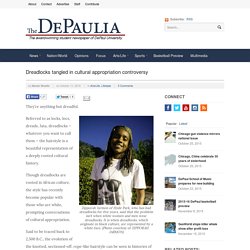 Zipporah Jarmon of Hyde Park, who has had dreadlocks for five years, said that the problem isn’t when white women and men wear dreadlocks. It is when dreadlocks, which originate in black culture, are represented by a white face. The Complex Art of Reclaiming African Culture  Are African-Americans appropriating the fashion and other aspects of African lifestyles, or are they rightfully reclaiming their culture? 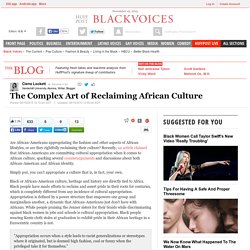 Recently, an article claimed that African-Americans are committing cultural appropriation when it comes to African culture, sparking several counterarguments and discussions about both African-American and African identity. T.I. Has Parted Ways With Iggy Azalea. White girl rocks box braids: Cultural appropriation or Cultural Insensitivity? Black Americans Wearing African Clothing Is NOT Cultural Appropriation : blackladies. 6 Ways You Harm Me When You Appropriate Black Culture – And How to Appreciate It Instead.

This African-Themed Show Had Zero Black Models. Are You African American?: I Don't Understand the Question  A curious case of passing took center stage on social media this week. 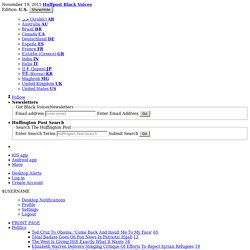 Enter Rachel Dolezal, the 37-year-old artist, professor and NAACP leader from Spokane, Washington who is allegedly passing as black. @drdawkins09 She went to Howard University, had a Black husband and a twist out a bad as Angela Davis'. pic.twitter.com/GrnIG6NiOv— ✊DarkSkinPower✊♿ (@galvezmiro) June 12, 2015 According to The Spokesman, "in recent days, questions have arisen about her background and her numerous complaints to police of harassment. Fade to White: EBONY Examines "Cultural Smudging" Effect on Black Music  By Juan Thompson From blue-eyed soul to straight-up theft, Black music has long been imitated and acculturated by Whites. we take a look at the difference between flattery and misappropriation. 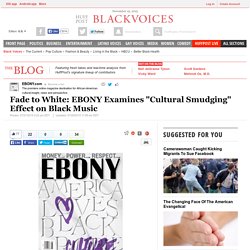 Fed up with her Caucasian semi-namesake being credited for "running" hip-hop by no less than Forbes magazine, a frustrated, struggling, even tearful Banks decried White cultural appropriation of hip-hop music in a now-famous 2014 interview on New York City's Hot 97 radio station. Banks' rant went viral. Revisiting My Roots. A year ago, I received awesome news that I was joining the HuffPost blogging family. 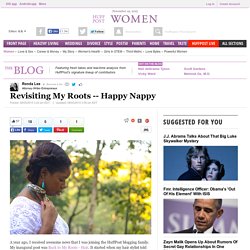 My inaugural post was Back to My Roots - Hair. It started when my hair stylist told me that it was time to give up the "creamy crack" hair relaxer addiction. Like a child being deprived of Halloween candy, I had a fit. "No, I can't. I need my creamy crack! " It's A Slap In The Face When White Women Wear Black Hairstyles. The Transparency of a "Incog-Negro"  In trying to make sense of Rachel Dolezal, the self-identified "black" woman of two white parents, and the thought-provoking queries now raised about transracialsim and transethnicity Boston Globe cartoonist Dan Wasserman provided me with an answer: "How does a confused Caucasian woman come to define the national conversation on race? 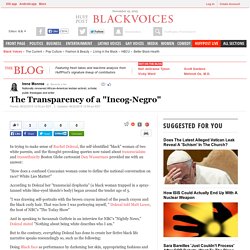 White Lies Matter! " According to Dolezal her "transracial dysphoria" (a black woman trapped in a spray-tanned white blue-eyed blonde's body) began around the tender age of 5. "I was drawing self-portraits with the brown crayon instead of the peach crayon and the black curly hair. What Does It Mean to Be Black?  We live in a dynamic time. 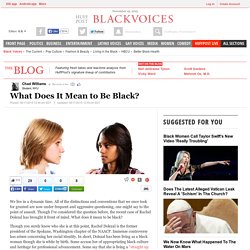 All of the distinctions and conventions that we once took for granted are now under frequent and aggressive questioning, one might say to the point of assault. Though I've considered the question before, the recent case of Rachel Dolezal has brought it front of mind. What does it mean to be black? Though you surely know who she is at this point, Rachel Dolezal is the former president of the Spokane, Washington chapter of the NAACP. Immense controversy has arisen concerning her racial identity. The irony of the proximity between Dolezal's story and the widely publicized transition of Caitlyn, formerly Bruce, Jenner has been noted. I took a genomics class last semester and the professor confirmed what I already knew; race is not a biological reality.

Rachel Dolezal Addresses Controversy Around Her Ethnicity On 'Today': 'I Identify As Black' Rachel Dolezal, the embattled former NAACP leader whose white parents say she misrepresented her identity by masquerading as a black woman for years, told the “Today” show on Tuesday that, despite the criticisms, she identifies as black. In a brief but highly anticipated live TV interview, Dolezal, who resigned from her position as the president of the NAACP chapter in Spokane, Washington, on Monday, told host Matt Lauer her self-identification with the black experience began as young as when she was 5 years old.

“I identify as black. ... I was drawing self-portraits with the brown crayon instead of the peach crayon, and black curly hair,” she said. On Being Non-White, But Passing Terribly Well. “Psst… Hey, Patty! You speak Spanish? Ignoring me? Hey! You speak Spanish?” P.E., third period, seventh grade. This White Feminist Loved Her Dreadlocks – Here's Why She Cut Them Off. "white dreads" and cultural appropriation - Beyond White Guilt. Hi everyone, i posted this entry on my journal last night with some interesting comments from friends of mine. i was wondering what y'all thought about this issue. thanks for reading, meghan "in answer to a question posed to me by a friend of mine about whether or not white people wearing dreads is cultural appropriation: 'i DO take issue with the white dreads phenomenon and i have had convos with white "well meaning" friends of mine who like the idea. black people have been told that they are ugly ever since the first white man raped and pillaged the first african village and brought africans into slavery. since then hair has been a big issue of beauty in the black/african american community. ever head mention of "good hair"?

The really paradoxical part is WHY would white people want to adopt things like wearing dreadlocks in the first place? Rachel Dolezal's Artwork Is Not Only Problematic, It Might Be Plagiarized. A History of Throwing Shade for Black Women and Gay White Men  Sierra Mannie's TIME Magazine piece, "Dear White Gays: Stop Stealing Black Female Culture," is a challenge to white gay men to "check their privilege" because their identity is more fluid than other minorities in this country and their usage of language and behavior that is associated often with the cultural expression of black women is offensive. Mannie wrote: But here's the shade -- the non-black people who get to enjoy all of the fun things about blackness will never have to experience the ugliness of the black experience, systemic racism and the dangers of simply living while black. In a rebuttal to Mannie's critique Slate's J. Bryan Lowder argued: In any case, my feeling is that this specific subgenre of gays is rather rare and skews pretty young (i.e., immature); far more common are gay white men who, like myself, occasionally make use of certain signifiers that could be said to "belong" to both gay culture and black (female) culture.

Iggy Azalea’s post-racial mess: America’s oldest race tale, remixed. Black Women Call Taylor Swift's New Video 'Really Troubling' Taylor Swift got herself into some hot water with the music video for her new single "Shake It Off. " The clip features Swift trying and failing to fit in with a number of subcultures, including that of ballerinas and break-dancers, but the scenes causing an uproar are the ones in which Swift crawls between the legs of a line of twerking dancers. The clip has spurred a negative reaction from commentators including Odd Future's Earl Sweatshirt, who expressed his displeasure by tweeting that the video is "perpetuating black stereotypes to the same demographic of white girls who hide their prejudice by proclaiming their love of the culture.

" HuffPost Live's Marc Lamont Hill discussed the controversy on Thursday with a panel that included comedian Amanda Seales, gender studies professor Treva Lindsey and writer Everdeen Mason, who doesn't believe Swift's use of twerking is racist. Check out part of the conversation in the video above, and catch the full HuffPost Live segment here. Black Female Survival and the Myth of the White Gay Cultural Savior, or, Dear Anthony. ‘Fresh Off the Boat’ uses black culture to talk more candidly about Asian culture. It’s clear from the first ten seconds of Fresh Off the Boat, the new ABC sitcom about a Taiwanese family moving from Washington D.C.’s Chinatown to Orlando, Florida, that 11-year old Eddie Huang is an anomaly and he just doesn’t fit in. In the opening scene, the camera pulls back to show his tiny figure swathed in the baggy, brightly colored clothes synonymous with the hip hop uniform of the time, and little Eddie struck a now-familiar pose: he defiantly crossed his arms high across his chest and nodded, not unlike the way Kool Moe Dee and Run D.M.C. used to do at the end of a knowingly dope rhyme.

This universal symbol of defiance was now being deployed to signify a little kid’s discomfort with his recent relocation from Washington D.C.’s Chinatown to the bright, bland landscape of suburban Florida. Young Eddie fully intends to shock with his wardrobe, using it to intimidate bullies and parents alike. I went to Los Angeles in November to have a warm weekend with an old friend.