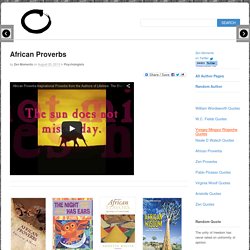 They have been used for centuries to teach the young about the meaning of life. A camel never sees its own hump. A fool and water will go the way they are diverted. A wise man never knows all, only fools know everything. Do not look where you fell, but where you slipped. Do not try to fight a lion if you are not one yourself. Don’t look where you fall, but where you slipped. Don’t set sail on someone else’s star. Everybody has been young before, but not everybody has been old before. He who learns, teaches. However long the night, the dawn will break. If you think you are too small to make a difference, try sleeping with a mosquito.

If you want to go quickly, go alone. It takes a village to raise a child. Only a fool tests the depth of the water with both feet. Return to old watering holes for more than water; friends and dreams are there to meet you. Smooth seas do not make skilful sailors. The one who asks questions doesn’t lose his way. Survivors 22 - African Nazca Lines, Ethiopian Megaliths, Mzungu Gods, Earth lifelines, Megalithic. Seen above is a remarkably well-preserved 1800-year-old Roman road in Timgad, which was a Roman colonial town in the Aurès Mountains of modern-day Algeria. 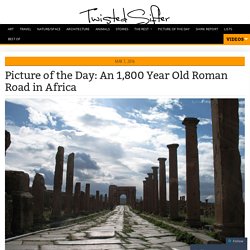 Founded around 100 AD, the ruins of Timgad are an UNESCO World Heritage Site, and regarded as one of the best examples of the grip plan as used in Roman city planning. Almost all Roman roads in Africa were built in the first two centuries AD. The Romans created a continuous coastal highway that stretched 2,100 miles (3,380 km) from the Atlantic to the Nile. Paid Content:Paid Content:Paid Content:Paid Content:Paid Content: Nubia, Kerma, Kush, Meroe, Black Pharaohs. Nubia Nubia Region Today Nubia was also called - Upper & Lower Nubia, Kush, Land of Kush, Te-Nehesy, Nubadae, Napata, or the Kingdom of Meroe. 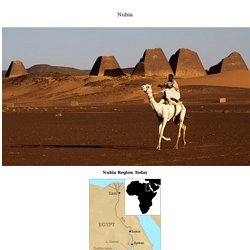 The region referred to as Lower Egypt is the northernmost portion. Upper Nubia extends south into Sudan and can be subdivided into several separate areas such as Batn El Hajar or "Belly of Rocks", the sands of the Abri-Delgo Reach, or the flat plains of the Dongola Reach. Nubia, the hottest and most arid region of the world, has caused many civilizations to be totally dependent on the Nile for existence. Historically Nubia has been a nucleus of diverse cultures.

Dogon Tribe - Nommo. Dogon The Dogon are an ethnic group located mainly in the administrative districts of Bandiagara and Douentza in Mali, West Africa. 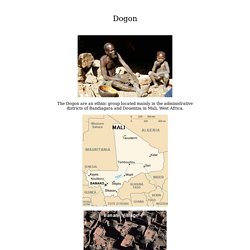 This area is composed of three distinct topographical regions: the plain, the cliffs, and the plateau. Within these regions the Dogon population of about 300,000 is most heavily concentrated along a 200 kilometer (125 mile) stretch of escarpment called the Cliffs of Bandiagara. These sandstone cliffs run from southwest to northeast, roughly parallel to the Niger River, and attain heights up to 600 meters (2000 feet). Ten Stunning Yet Little Known Ancient Treasures Across Africa. The continent of Africa contains a plethora of ancient wonders, yet very few of them are well-known internationally or attract tourists from across the world. 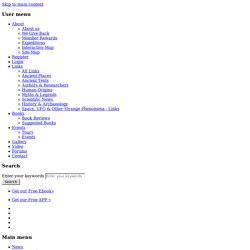 From over a thousand stone circles concentrated in a small area to ruins of great cities, megalithic calendars that predate the pyramids by tens of thousands of years, and the remains of towns that have seen the rise and fall of countless civilizations, there is no shortage of awe-inspiring sites across the continent. Here we feature just ten incredible sites that are little known in the wider world. The incredible Senegambian Stone Circles It is amazing that the Senegambian Stone Circles are not more well-known considering there are more than 1,000 of them spread over an area that is 100 km wide and 350 km in length in the countries of Gambia and Senegal in West Africa. True Hitsory of The Moors in North America 02/09 by Ra Imhotep. Rainbow Prophecy - Black race. Since the colonization of Africa and its indigenous people, the Black man, woman and child have been taken from a place of sovereign spirituality and royalty, to the status of social pariahs of the world. 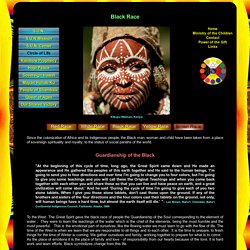 Guardianship of the Black "At the beginning of this cycle of time, long ago, the Great Spirit came down and He made an appearance and He gathered the peoples of this earth together and He said to the human beings, 'I'm going to send you to four directions and over time I'm going to change you to four colors, but I'm going to give you some teachings and you will call these the Original Teachings and when you come back together with each other you will share these so that you can live and have peace on earth, and a great civilization will come about.' And he said 'During the cycle of time I'm going to give each of you two stone tablets. When I give you those stone tablets, don't cast those upon the ground. THE ZULU CREATION MYTH.