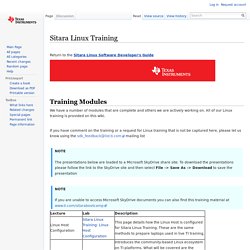 All of our Linux training is provided on this wiki. If you have comment on the training or a request for Linux training that is not be captured here, please let us know using the sdk_feedback@list.ti.com mailing list. Introduction to Linux One-Day Workshop. Overview. 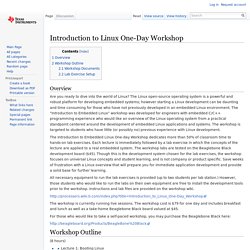 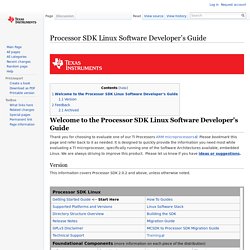 Please bookmark this page and refer back to it as needed. It is designed to quickly provide the information you need most while evaluating a TI microprocessor, specifically running one of the Software Architectures available, embedded Linux. We are always striving to improve this product. Please let us know if you have ideas or suggestions. Version This information covers Processor SDK 2.0.2 and above, unless otherwise noted. If you have feedback, suggestions, or ideas on how to improve the SDK, it is very appreciated. BeagleBoneBlack Building Kernel - BeyondLogic. Compiling the BeagleBone Black Kernel The following contains instructions for building the BeagleBone Black kernel on Ubuntu 15.04. 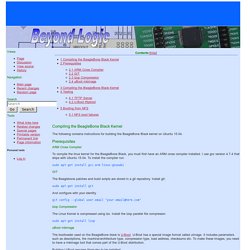 Prerequisites ARM Cross Compiler To compile the linux kernel for the BeagleBone Black, you must first have an ARM cross compiler installed. I use gcc version 4.7.4 that ships with Ubuntu 15.04. PRU Training: Hands-on Labs. Introduction The labs provided on this page will give you a hands on tutorial of the PRU, C-compiler, and Linux driver. 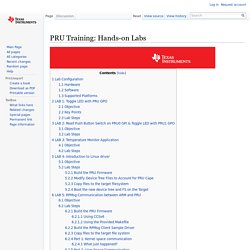 Each of the following sections below will walk you through a particular Lab exercise, including the step-by-step instructions to complete the lab. NOTE: In this guide commands to be executed for each step will be marked in BOLD. Linux kernel development for beaglebone black. Writing a Linux Kernel Module — Part 1: Introduction. Exploring BeagleBone – Extra Content: Linux Kernel Programming. On this chapter web page I provide additional materials that align with the content in the book, but were written subsequent to its publication. 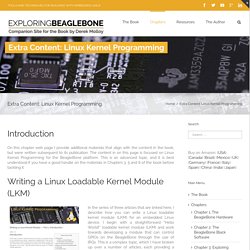 The content in on this page is focused on Linux Kernel Programming for the BeagleBone platform. This is an advanced topic, and it is best understood if you have a good handle on the materials in Chapters 3, 5 and 6 of the book before tackling it. In the series of three articles that are linked here, I describe how you can write a Linux loadable kernel module (LKM) for an embedded Linux device. Building BBB Kernel. Introduction The Beaglebone Black is still a very young board, and new software images are being created every few weeks or more often. 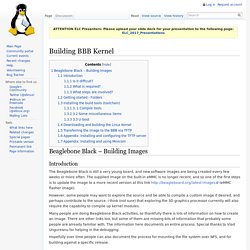 The supplied image on the built-in eMMC is no longer recent, and so one of the first steps is to update the image to a more recent version at this link (eMMC flasher image). However, some people may want to explore the source and be able to compile a custom image if desired, and perhaps contribute to the source. I think (not sure) that exploring the 3D graphics processor currently will also require the capability to compile up kernel modules. Many people are doing Beaglebone Black activities, so thankfully there is lots of information on how to create an image. AM335x techincal reference manual. 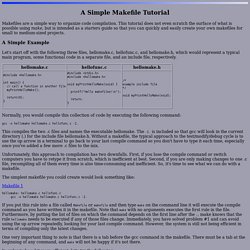 This tutorial does not even scratch the surface of what is possible using make, but is intended as a starters guide so that you can quickly and easily create your own makefiles for small to medium-sized projects. A Simple Example. An Introduction to GCC - A simple makefile. For those unfamiliar with make, this section provides a simple demonstration of its use. 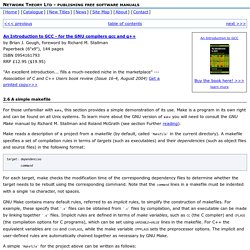 Make is a program in its own right and can be found on all Unix systems. To learn more about the GNU version of make you will need to consult the GNU Make manual by Richard M. Stallman and Roland McGrath (see section Further reading). Compilation - Compiling multiple C files in a program. GitHub - jackmitch/libsoc: libsoc: C library for interfacing with common SoC peripherals through generic kernel interfaces. Index of /rootfs/bb.org/testing. Cookbook. More information and errata here Source code available at Note that the 2015-03-01 image is known to work with the examples in the book. 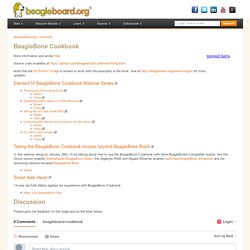 Bbb-Series. Beagleboard:C/C++ Programming. 1) Connect your BeagleBone to your computer using a Mini-USB Data Cable. 2) Using a terminal shell, such as PuTTy, serial connect into your BeagleBone and log in as 'root' 3) Now, we will create a simple C program that turns an on-board LED on and off ten times. Type this into your terminal shell. nano example.cpp 4) Copy and paste this code into the "nano" text editor. 5) Next, press Ctrl+X, type "Y" to save changes, and press enter. 6) Now, we need to compile the program and make an executable file so you can run it.

C/C++ cross development for BeagleBone in Windows. Embedded Beagle Class. Embedded Linux Class by Mark A. Yoder The goal of this project is to create teaching materials for the BeagleBoard that will make it easy for those teaching either 8/16-bit embedded classes, or traditional Operating System (OS) classes to use the Beagle in their class. The 8-bit PIC processors and the 32/64-bit Intel class processors represent the two extremes of the operating system world. The 8-bit processors have very limited resources may have no OS; the 64-bit processors have big OS’s that often view the processor as having unlimited resources. The goal is to provide paths to the Beagle from both camps.

BeagleBone Black Brings Arduino-Style Connectivity. The Use of BeagleBone Black Board in Engineering Design and Devel. Embedded - Driving Beaglebone GPIO through /dev/mem. The Python Tutorial. Python is an easy to learn, powerful programming language. It has efficient high-level data structures and a simple but effective approach to object-oriented programming. Python’s elegant syntax and dynamic typing, together with its interpreted nature, make it an ideal language for scripting and rapid application development in many areas on most platforms. Learning BeagleBone Python Programming.

In this In this article by Alexander Hiam, author of the book Learning BeagleBone Python Programming, we will go through the initial steps to get your BeagleBone Black set up. By the end of it, you should be ready to write your first Python program. We will cover the following topics: Programming the BeagleBone Black with Python.

This post was written by Rui Santos and Luís Perestrelo authors of BeagleBone For Dummies. Building a surveillance system with a PIR sensor, the BeagleBone Black and Python. The BeagleBone Black is an outstanding tool for projects that involve the Internet. Access is easy (simply connect it to the router through an Ethernet cable ), and both Python and JavaScript feature libraries that greatly simplifies matters. PIR sensors are quite neat devices that are able to detect motion. Everything You Need to Know about The Beaglebone Black. Linux Board Porting Training Series. PROCESSOR-SDK-LINUX-AM335X 03_01_00_06 - TI.com.

Emb4fun. How to Choose Between Raspberry Pi and BeagleBone Black. Speeding Up BeagleBone Black GPIO A Thousand Times. Getting Started with Beaglebone Black (BBB) and Starterware. Objective The Beaglebone is typically used as a lightweight Linux computer that has the added ability of peripherals. However, it can also be used as an extremely powerful development board for embedded systems. It is a great way to become more familiar with working with an ARM core. Unfortunately, outside of the documentation that Texas Instruments supplies (which is sometimes a little difficult to decipher), there is not much out there in the ways of tutorials. This tutorial gives an introduction to using Starterware (Texas Instrument’s libraries, device configuration files, and examples for the AM335x) in Code Composer Studio with the Beaglebone.

What we need? Alright so obviously the first thing we need is a Beaglebone. NOTE: Don’t plug in your emulator until you install Code Composer and the drivers or you may run into difficulties. Hardware Software Installing CCS So when you install Code Composer, there are a few things you need to make sure you do. Processor Support At least include: BeagleBone Black Debugging via TI USB100v2 JTAG Emulator. Everything You Need to Know about The Beaglebone Black.