Legacies. Diaspora. Tradeandcommerce. Trans-Atlantic Slave Trade. Roll over names of designated regions on the map above for descriptions of the role of each in the trans-Atlantic slave trade. 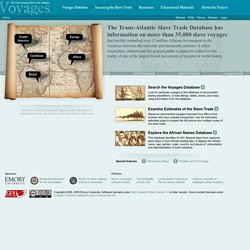 The North American mainland played a relatively minor role in the trans-Atlantic slave trade. Its ports sent out less than five percent of all known voyages, and its slave markets absorbed less than four percent of all slaves carried off from Africa. An intra-American trade in slaves – originating in the Caribbean - supplied additional slaves, however. This region was exceptional in the Americas in that a positive rate of natural population growth began relatively early, thus reducing the dependence of the region on coerced migrants. The Caribbean was one of the two major broad regional markets for slaves from Africa. Brazil was the center of the slave trade carried on under the Portuguese flag, both before and after Brazilian independence in 1822, and Portugal was by far the largest of the national carriers. Trans-Atlantic Slave Trade. Trans-Atlantic Slave Trade. Nerdfighteria Wiki - Congo and Africa's World War: Crash Course World History 221. 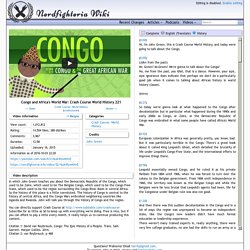 Green! Mr.Green! We're gonna to talk about the Conga? No, me from the past, you idiot, that is a dance. (Intro) (0:27)So today we're gonna look at what happened to the Congo after decolonization but in particular what happened during the 1990s and early 2000s as Congo, or Zaire, or the Democratic Republic of Congo was embroiled in what some people have called Africa's World War. (0:42)European colonization in Africa was generally pretty, you know, bad. . (0:58)Leopold essentially owned Congo, and he ruled it as his private fiefdom from 1884 until 1906, when he was forced to turn over the colony to the Belgian government. . (1:39)But I wanna be clear: that wasn't the Congo's fault, it was because there weren't educational or leadership opportunities available to Congolese people. (8:22)Thanks, thought bubble. Nerdfighteria Wiki - Decolonization and Nationalism Triumphant: Crash Course World History #40. Nerdfighteria Wiki - Imperialism: Crash Course World History #35. 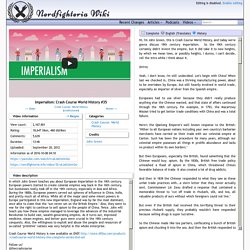 So the 19th century certainly didn't invent the empire, but it did take it to new heights, by which we mean lows, or possibly heights, I dunno, I can't decide, roll the intro while I think about it. (Intro) Yeah, I don't know, I'm still undecided. Let's begin with China! When last we checked in, China was a thriving manufacturing power, about to be overtaken by Europe, but still heavily involved in world trade, especially an importer of silver from the Spanish empire. Europeans had to use silver because they didn't really produce anything else the Chinese wanted, and that state of affairs continued through the 18th century. Here's the Qianlong Emperor's well known response to the British: "Hither to all European nations including your own country's barbarian merchants have carried on their trade with our celestial empire at Canton. Okay. So what made the difference? All right. Nerdfighteria Wiki - The Atlantic Slave Trade: Crash Course World History #24.

Hi, my name is John Green, this is Crash Course World History and today we're gonna talk about slavery. 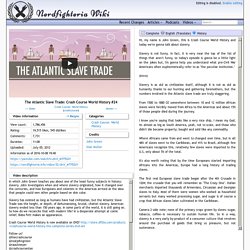 Slavery is not funny. In fact, it is very near the top of the list of things that aren't funny, so today's episode is gonna be a little light on the jokes but, I'm gonna help you understand what pre-Civil War Americans often euphemistically refer to as "the peculiar institution. " (Intro) Slavery is as old as civilization itself, although it is not as old as humanity thanks to our hunting and gathering foremothers, but the numbers involved in the Atlantic slave trade are truly staggering.

From 1500 to 1880 CE somewhere between 10 and 12 million African slaves were forcibly moved from Africa to the Americas and about 15% of those people died during the journey. I know you're saying that looks like a very nice ship, I mean my God, its almost as big as South America, yeah, not to scale, and those who didn't die became property; bought and sold like any commodity. MFTP:"Mr. Nerdfighteria Wiki - Mansa Musa and Islam in Africa: Crash Course World History #16. Hi, my name’s John Green, this is Crash Course World History, and today we’re gonna talk about Africa. 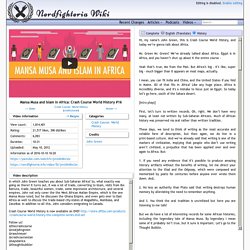 Mr. Green Mr. Green! We’ve already talked about Africa. Egypt is in Africa, and you haven’t shut up about it the entire course - Yeah that’s true, Me from the Past. I mean, you can fit India and China, and the United States if you fold in Maine. [intro plays] First, let’s turn to written records. These days, we tend to think of writing as the most accurate and reliable form of description, but then again, we do live in a print-based culture. 1. 2.

And 3. But we do have a lot of interesting records for some African histories, including the legendary tale of Mansa Musa. So there was this king Mansa Musa, who ruled the west African empire of Mali, and in 1324-ish, he left his home and made the hajj, the pilgrimage to Mecca. He brought with him an entourage of over 1000 people (some sources say 60,000) and, most importantly, 100 camel loads of gold. A.