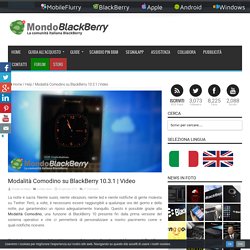 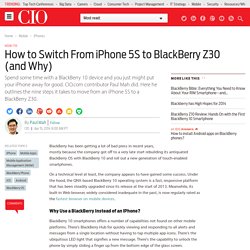 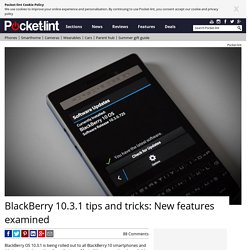 Most of them were already available as part of OS 10.3 for the BlackBerry Passport and Porsche Design P'9983, and the Classic comes pre-installed with the latest operating system from the box. But other BB10 users will appreciate the update which adds new functionality to their phones. The update is hitting Europe, the Middle East, Africa and Asia Pacific regions first but other areas will get it in the "coming weeks". So, for those that are yet to get it, here's a guide on the main additions you can expect to receive. Visually, you'll see that BB 10.3.1 has a more modern look, losing bloat around the apps, for example, dropping the shadows they used to have. BlackBerry Z30 vs BlackBerry Classic - Phone specs comparison. Google drops Exchange ActiveSync. What does it mean for BlackBerry?

In what Google referred to as 'winter cleaning' they announced that, effective 30 January 2013 they will be shutting down new set-ups for their Google Sync service via its Microsoft Exchange ActiveSync protocol. 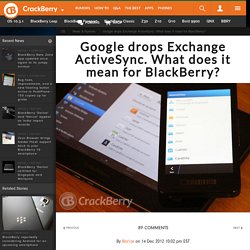 Instead, they'll be offering access through access via IMAP, CalDAV and CardDAV. Because of this, we saw that the Google Sync app for BlackBerry finally give up the ghost but what does it really mean for BlackBerry, the BlackBerry PlayBook and the upcoming BlackBerry 10? Starting with some key words there, this only affects new set-ups. If you're alredy attached to the services with a device then Google will continue to offer it. How to sync multiple Google Calendars on BlackBerry 10. When Google finally decided to kill off the BlackBerry Google Sync app, I wasn't a happy camper. 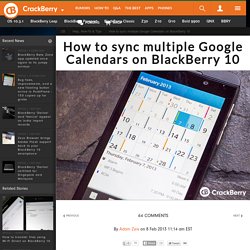 For as long as I can remember I've kept no less than five calendars tied to my main Gmail account, so not being able to sync them on my BlackBerry was a heartbreak for me. I searched and searched for a way to keep them all going on my Bold 9900 to no avail. The only way to do the job was a painful addition of each account to my device, and things just got messy at that point. Thankfully BlackBerry 10 brings both Exchange ActiveSync and CalDAV support, so with a few tricks you can get in sync with all of your Google calendars on your BlackBerry Z10 or BlackBerry Q10.

One thing to note here is that Google has pulled ActiveSync for new accounts, so if you don't already have an account you use, this process most likely won't help you at all (but it's worth a shot) This tutorial is for those who have multiple Google calendars (shared or public) attached to one Google account. BlackBerry Link - BlackBerry 10 Smartphone to Computer Sync. OS v5.0 to 7.1.

After you transfer data to your new BlackBerry 10 device, consider deleting all of the data on your previous device running the BlackBerry OS (version 5.0 to 7.1). 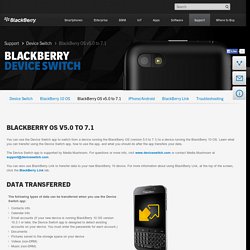 A security wipe is designed to permanently delete your data so that it can't be recovered. This includes email accounts, downloaded apps, media files, documents, browser bookmarks, and settings.you have turned on data encryption. The process for deleting your device data can take up to an hour to complete. 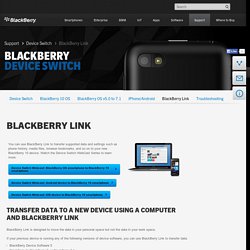 A security wipe is designed to permanently delete the data on your device so that the data can't be recovered. This includes email accounts, downloaded apps, media files, documents, browser bookmarks, and settings. If you have turned on data encryption, the process for deleting your device data can take up to an hour to complete. You can’t stop the process after you start it. If you reset your device, the process restarts after the device restarts.

How to prevent deleted Gmail messages from archiving when synced using IMAP. When it comes to managing my Gmail account on my BlackBerry Z10, I learned the hard way that it’s not always as simple as it looks. 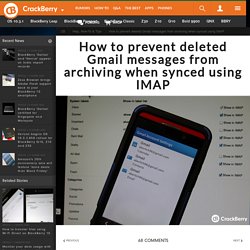 This is especially true as I added my account using the IMAP protocol. One of the things I didn’t realize is that deleting an e-mail off my device did not act in quite the same manner it had on my BlackBerry Bold 9900. Rather than sending deleting items to the trash, they were archived instead. As you can imagine, suddenly discovering hundreds of items there when logging in via my desktop was not a pleasant sight. In true CrackBerry fashion I scoured the forums until a workaround was found that would ensure I could delete e-mails without being in front of my computer. I recommend performing the five swipe gesture to reset the hub after completing the above steps. How to restart the BlackBerry 10 Hub easily using this awesome five swipe gesture! Ok, now this BlackBerry 10 tip is just way too cool. 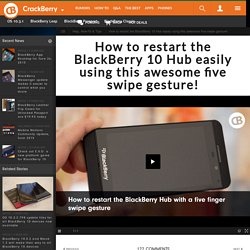 I just discovered you can restart the BlackBerry 10 Hub using a super awesome five swipe gesture. It's kind of crazy, but it absolutely works. Email deleted on Z10 but stays on Gmail - BlackBerry Forums at CrackBerry.com. How to set up Gmail on your BlackBerry 10 device using IMAP, CalDav and CardDav. Unfortunately Gmail no longer supports Exchange ActiveSync for free users, so some may be having issues getting their accounts setup properly on BlackBerry 10. 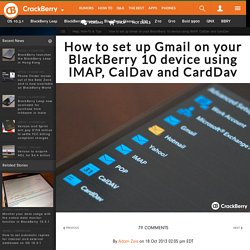 Gmail has turned to using IMAP, CalDav and CardDav for email, calendar and contacts instead. Setting these up isn't too much of a chore, just a bit of extra effort as you'll need to do each one individually instead of using the regular email setup to grab all three. Not to worry though because we'll show you how it's done - keep reading to get started. How To Setup Email Using IMAP To setup your Gmail account, go to Settings > Accounts.

USB Sync Outlook Contacts/Calendar/Tasks with BlackBerry Q10 Z10. You can set up Outlook to wirelessly synchronize your contacts and calendar with a BlackBerry Q10 or Z10 smartphone, but it is a clever solution if email provider doesn’t support these features. USB Syncing is fundamental for business with the BlackBerry and the corporate contacts and calendar in cloud database might be hackable, but BlackBerry doesn’t offer such way for OS 10 device. The BB10OutlookSync.com website has released a BB10 PC Outlook Sync app for securely syncing your Standalone and Exchange Outlook’s contacts, calendar, tasks and notes (Remember app) between your computer and your BlackBerry Q10 and Z10 via USB cable, without requiring Exchange or Cloud.

BB10Sync solution cost $24.99 for single user license. If you need to get it on 3 PCs in a family, Family Pack takes advantage of a $39.99. For Business, you can use the software on up to 5 computers in an office by spending $99.99. Outlook Task sync - Page 4. How to set up Outlook to wirelessly synchronize your contacts and calendar with a BlackBerry Z10 smartphone. Do you use Microsoft Outlook 2010, 2007 or 2003 to store your contacts and calendar on your computer and want to wirelessly synchronize these items with your BlackBerry Z10, but your email provider doesn’t support these features?