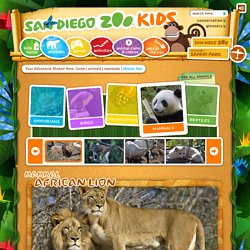 There can be from from 3 to 30 lions in a pride. A pride contains many females and their young, and a few males. The lionesses rule the pride, working together to hunt and raise the cubs. But the adult males play an important role as well. SOUTH AFRICAN LION. Distribution South African lions live in sub-Saharan Africa excluding the Congo rainforest belt. 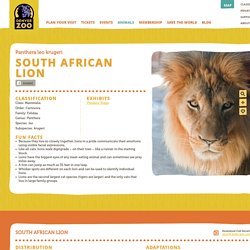 Habitat Lions live in a variety of habitat including rich grasslands, scrublands, arid woodlands, and semi-deserts. Physical Description Males can exceed nine and a half feet (2.9 m) in length.Male lions weigh 330-530 pounds (149-239 kg); females weigh 270-400 pounds (122-180 kg).The lion stands over three feet (1 m) at the shoulder.Their fur is a pale sandy or tawny yellow.Adult males have a large, bushy mane of darker fur around their head and neck.Cubs have rosette spots which fade as they mature.

Diet What Does It Eat? In the wild: A variety of large prey including wildebeest, antelope, zebra, giraffe and warthog. What Eats It? Saint Louis Zoo. African lion - Philadelphia Zoo. Like other cats, lions have excellent senses. 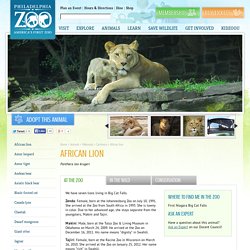 Since they are primarily nocturnal (meaning most active at night) their night vision is six times greater than that of humans. Well-developed whiskers and other long stiff hairs above their eyes and on their underarms have nerve connections and are used for sensing. They also have a well-developed sense of smell which they use to communicate with other lions who mark their territory. Los Angeles Zoo and Botanical Gardens Lion, African - Los Angeles Zoo and Botanical Gardens. Lions are perfect hunting machines. 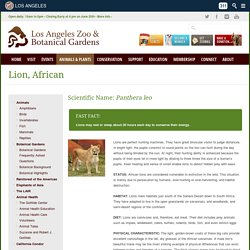 They have great binocular vision to judge distances. In bright light, the pupils constrict to round points so the lion can hunt during the day without being blinded by the sun. At night, their hunting ability is enhanced because the pupils of their eyes let in more light by dilating to three times the size of a human’s pupils. Keen hearing and sense of smell enable lions to detect hidden prey with ease.

STATUS: African lions are considered vulnerable to extinction in the wild. HABITAT: Lions roam habitats just south of the Sahara Desert down to South Africa. Lion Families. Discover a surprising truth about these mighty beasts—they can be purr-fectly loving pussycats! 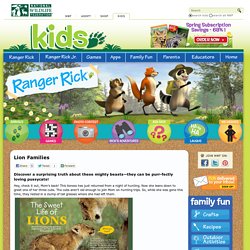 Hey, check it out, Mom’s back! This lioness has just returned from a night of hunting. Now she leans down to greet one of her three cubs. The cubs aren’t old enough to join Mom on hunting trips. So, while she was gone this time, they rested in a clump of tall grasses where she had left them. What goes on behind the scenes in lion land?

Mom lovingly grooms each of her babies. Time Out! Like kittens, the cubs love to roughhouse with each other. Make Way For Three! These cubs haven’t eaten for hours. All the moms in a pride may look after all the cubs. Funky Fun What do bored cubs play with? Back OFF! Dad has been very patient with this playful little lion. Mine, All Mine! Who can resist Mom’s twitching tail? ’Fraidy Cat New things are exciting to a cub — and sometimes scary! Lion. Atlanta Zoo. Scientific Name: Panthera leo Conservation Status: Vulnerable Where to see them: Lion habitat, African Plains Fun Facts: A lion’s roar can be heard for a distance of up to five miles. 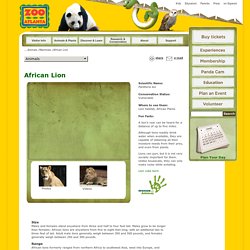 Although lions readily drink water when available, they are capable of obtaining all their moisture needs from their prey, and even from plants. Lions can purr, but it is not very socially important for them. Lion cubs born Size Males and females stand anywhere from three and half to four feet tall. Range African lions formerly ranged from northern Africa to southwest Asia, west into Europe, and east into India.

Habitat Grassy plains, savannas, open woodlands, thick bush, and scrubs Lifestyle Lions live in matriarchal prides with up to 40 individuals, most of which are related females and their offspring. Food In the wild, lions eat small animals, such as birds and reptiles, and larger animals like zebra, wildebeest, and antelope. Life Cycle Lions become sexually mature between 3 and 4 years of age. Houston Zoo. Lions are the only truly social cat species, living in groups called prides. 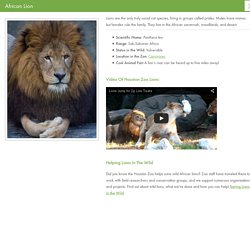 Males have manes, but females rule the family. They live in the African savannah, woodlands, and desert. Scientific Name: Panthera leo Range: Sub-Saharan Africa Status in the Wild: Vulnerable Location in the Zoo: Carnivores Cool Animal Fact A lion’s roar can be heard up to five miles away! Video of Houston Zoo Lions. Sea World. Smithsonian Institute. Class: Mammalia Order: Carnivora Family: Felidae Species: Panthera leo The world's most social felines, lions usually get by with a little help from their pride mates. 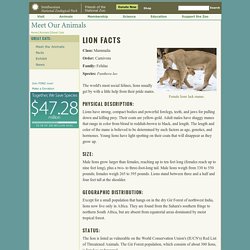 Physical Description: Lions have strong, compact bodies and powerful forelegs, teeth, and jaws for pulling down and killing prey. Size: Male lions grow larger than females, reaching up to ten feet long (females reach up to nine feet long), plus a two- to three-foot-long tail. Ranger Rick. The lion is one of the most incredible Big Cats on the planet. 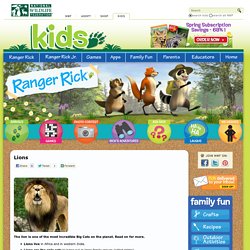