Good info later on focusing on Black Power King X and Pres. Essay on Black Power good ideas but for a different exam board. Black Power. “Black Power”, as a term, is most associated with Stokeley Carmichael, the 1960’s civil rights leader. 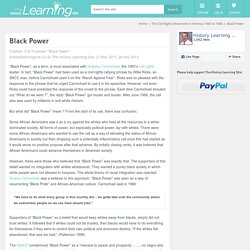 In fact, “Black Power” had been used as a civil rights rallying phrase by Willie Ricks, an SNCC man, before Carmichael used it on the “March Against Fear”. Ricks was so pleased with the response to the phrase that he urged Carmichael to use it in his speeches. However, not even Ricks could have predicted the response of the crowd to the phrase. Each time Carmichael shouted out “What do we want ?” , the reply “Black Power” got louder and louder. But what did “Black Power” mean ? Some African Americans saw it as a cry against the whites who held all the resources in a white-dominated society. However, there were those who believed that “Black Power” was exactly that. Supporters of “Black Power” as a belief that would keep whites away from blacks, simply did not trust whites. Black Power. In 1966, the Black Panther Party offered a list of their wants and beliefs. 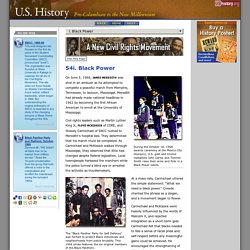 Drawing from the language of the Declaration of Independence, the document made a powerful statement about the state of race relations in the United States at the time. THE BLACK PANTHER PARTYPlatform & ProgramOctober 1966WHAT WE WANTWHAT WE BELIEVE 1. WE WANT freedom. We want power to determine the destiny of our Black Community. WE BELIEVE that black people will not be free until we are able to determine our destiny. 2. WE BELIEVE that the federal government is responsible and obligated to give every man employment or a guaranteed income. 3. WE BELIEVE that this racist government has robbed us and now we are demanding the overdue debt of forty acres and two mules. 4. WE BELIEVE that if the white landlords will not give decent housing to our black community, then the housing and the land should be made into cooperatives so that our community, with government aid, can build and make decent housing for its people.

Black Panthers of Alabama. Anyone who was not a diehard white supremacist could see the march from Selma to Montgomery in 1965 for what it was: a myth in motion, advancing east through the Alabama countryside at two miles an hour. 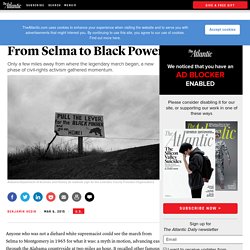 It recalled other famous wanderings, like the trek of the Israelites and Gandhi’s 1930 pilgrimage to the sea, and ended in a place of rich historical association. Montgomery was named the first capital of the Confederacy in 1861, and when Martin Luther King, Jr. addressed the crowd at the march’s end he stood on the spot where just two years earlier George Wallace had declared “segregation now, segregation tomorrow, segregation forever.” With passage of the Voting Rights Act at hand, there could be no better place to hold the victory party. The march itself was a spectacle or symbol, hugely necessary and memorable, but what the power of the ballot actually meant—how it would affect the lives of African Americans, especially in the South—had yet to be decided. Malcolm X - Black History.

Born Malcolm Little in 1925, in Omaha, Nebraska, Malcolm was the son of a Baptist preacher who was a follower of Marcus Garvey. 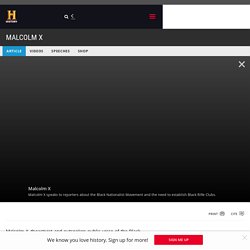 After the Ku Klux Klan made threats against his father, the family moved to Lansing, Michigan. There, in the face of similar threats, he continued to urge blacks to take control of their lives. Malcolm’s father was slain by the Klan-like Black Legionaries. Although he was found with his head crushed on one side and almost severed from his body, it was claimed he had committed suicide, and the family was denied his death benefit. Its disintegration quickly followed: welfare caseworkers sought to turn the children against each other and against their mother, from whom Malcolm, then six, was taken and placed in a foster home.

After the eighth grade, Malcolm dropped out of school, headed for a life of crime. After six years Malcolm was released from prison. Malcolm’s assertion that President John F. The Reader’s Companion to American History. The Black Panthers. The Black Panthers were formed in California in 1966 and they played a short but important part in the civil rights movement. 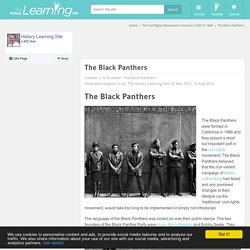 The Black Panthers believed that the non-violent campaign of Martin Luther King had failed and any promised changes to their lifestyle via the ‘traditional’ civil rights movement, would take too long to be implemented or simply not introduced. The language of the Black Panthers was violent as was their public stance. The two founders of the Black Panther Party were Huey Percy Newton and Bobby Seale. They preached for a “revolutionary war” but though they considered themselves an African-American party, they were willing to speak out for all those who were oppressed from whatever minority group.

They were willing to use violence to get what they wanted. The Black Panther Party (BPP) had four desires : equality in education, housing, employment and civil rights. Black power aa. Stokely Carmichael.